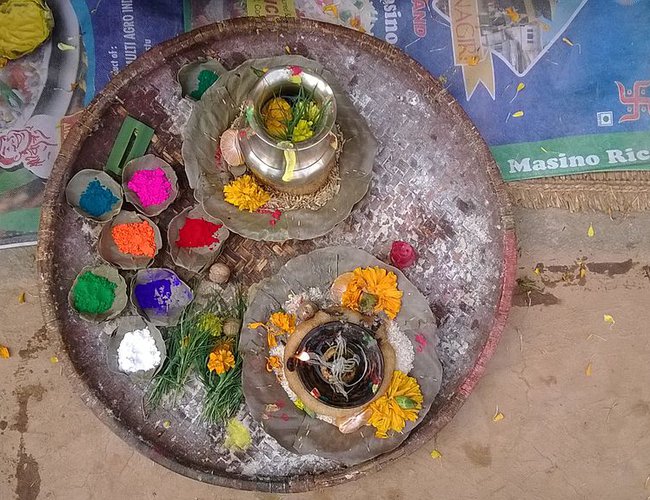 Today is Bhai Tika, a Hindu holiday in Nepal, celebrated during the Tihar. On this day, sisters apply "tilaka" ("tika") to their brothers' foreheads to thank them and ensure they have a long and prosperous life. And brothers give gifts to their sisters. According to a legend, on this day Yamraj, the God of Death, visited his sister, Yamuna, and she put tika on his forehead, garland on his neck and cooked special food. At the end of the evening, Yamraj and Yamuna exchanged gifts. And later Yamraj decided that anyone who receives a gift from his sister will never die on that day.

Tika, a typically red dot on the forehead, during the holiday consists of seven colours, each of which has a symbolic meaning. After applying tika, sisters perform puja, a traditional ritual; circling brothers and putting oil on the floor and brother's hair for good luck and purification of the spirit following Tantric rituals. Sisters give brothers Sagun, sweets, and a sacred cotton thread of Tantric importance. Brothers also present their gifts.

Bhai Tika is the day when sisters create garlands for their brothers called Makhamali (Gomphrena globosa). Makhamali flower that doesn't fade away for a long time, symbolizing the sister's wish for a long life for her brother. Dubo grass and Godavari (chrysanthemum) are also used during Bhai Tika.

On Bhai Tika, sisters pray for their brothers to have long and happy lives by performing Tika ceremony and brothers offer gifts to their sisters. Bhai Tika is also known as Bhai Dooj and Bhathru Dwithiya.

The Nepal Calendar Determination Committee has announced the auspicious time for receiving and offering ‘Bhai Tika’ on the occasion of Tihar festival this year. Bhai Tika Muhurat is 12:54 to 15:06 Duration = 2 Hours 12 Minutes.

Bhai tika is the last, and the most awesome day of Tihar. In this day, the sisters apply Tika to their siblings' brothers and subsequently, given the name as 'Bhai Tika', say thanks to them for the security they give. The Tika is bright, which comprises of seven hues and called as 'Saptarangi Tika' in Nepali.

Alongside the Tika, the sisters offer wreaths of Marigold and Chrysanthemum these days the plastic readymade laurels are additionally used to some degree, on account of shortage of the blooms, desserts, and unique dishes for them. The sisters appeal to God for the siblings' long lives, and sit down to chat with them, and appreciate the dinner together.

This is trusted that Yamaraj, the God of death wants the siblings, and the petitions of the sisters spare their lives as a blessing to the sisters for their token of adoration. Siblings sit in a specific place, and the sisters do the puja, which comprises of dropping oil from a copper pitcher on the floor and applying it to the sibling's hair.

The siblings additionally apply tika of five hues to the sister's brow, and give them something as blessing. The individuals who don't have sisters or siblings do it with cousins or close relatives. The Bhai Tika is a vital day for the Hindu, to fortify the connection amongst brothers and sisters.

Bhai Dooj or Bhaiya Dooj is a Hindu festival celebrating the unconditional love bond between a brother and a sister. Bhai Dooj defines the eternal love between siblings, dedicated to strengthening the bond between them. On this auspicious day, sisters pray to God for the longevity, well-being and prosperity of their beloved brother. With a decorated thali containing sweets, roli and coconut, the sister ceremonize the occasion by putting a tilak or a vermillion mark on the forehead of their brothers followed by an aarti of him. Then they sweeten their mouths with sweets and in return sisters are lavished with gifts from their brother. The festival is celebrated on the very last day of the five days long Diwali. According to the Gregorian calendar, the festival occurs on the second day of the Shukla Paksha in the Hindu month of Kartik which generally falls between October and November. The festival of Bhaiya Dooj falls on 29th October, Tuesday for the year 2019. The tika or tilak muhurat starts at 1.11 P.M onwards till 3.25 P.M.

The festival of Bhai Dooj has a literal meaning attached to it. 'Bhai’ means brother and 'Dooj’ means the second day after the new moon which is a day of celebration. In Hinduism, the day holds special significance into the lives of a brother and a sister. This auspicious occasion not only commemorates the strong bonding between two opposite-sex siblings but is also said to protect them from the evil forces and bring new hopes and prosperity in their lives.

Bhai Dooj is celebrated in different parts of the country with different rituals and has various folklores associated with it. The festival is known as Bhai Phota in West Bengal, Bhau Beej in Maharashtra and Yama Dwitiya in southern India and is celebrated with sisters applying tilak on the brother's forehead along with a special mantra that they chant while at it. While in Haryana, along with the ritual of the tilak, dry coconut is tied with kalawa thread along its width and offered at the time of aarti.

There are few Hindu mythological based stories related to the origin of this auspicious day. According to one legend, it is said that after defeating the evil demon Narakasura, Lord Krishna visited his sister Subhadra. His sister gave him a warm welcome with sweets and flowers. She then applied the ceremonial tilak on Krishna’s forehead. It is believed that this is the origin of the festival of “Bhai Dooj".

Another legend revolves around the story of Yama, the God of death. It is believed that Yama visited his beloved sister, Yamuna on Dwitheya, the second day after the new moon and she welcomed him with a tilak ceremony, garlanded him and fed him special dishes. They dined together after a long time and exchanged gifts. Yama, after the occasion, announced that whoever receives tilak from his sister on this particular day will enjoy a long life and prosperity. Since then this day to be celebrated as Bhai Dooj across the country.