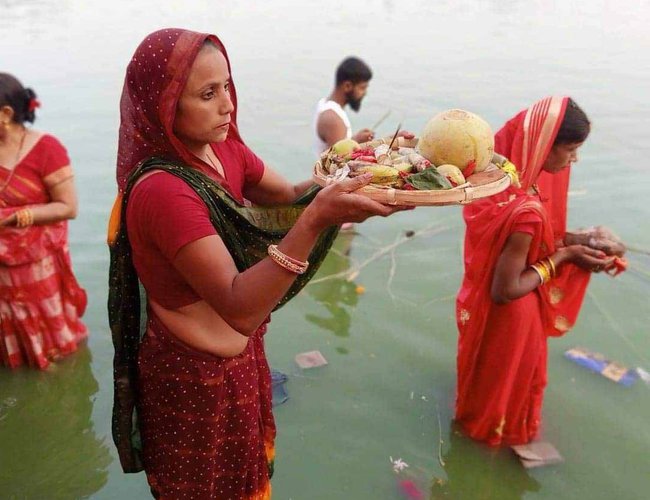 After performing Usha Arghya Puja, the Chhath Puja, a four-day-long festival that is celebrated with great enthusiasm in Nepal and the states of U.P., Bihar, Jharkhand and parts of southern.

Chhath is also known as the Mahaparv that symbolizes its significance in the region. The four-day-long festivals that starts with 'Nahai Khai' on Day 1 comes to its completion with the sunrise on Day 4. Chhath meaning 'sixth' falls on the sixth day of the month of Kartika as per the Lunar Calendar.

The Chhath Puja concludes with morning arghya on the fourth day. Devotees offer 'arghya' to rising sun. The auspicios timing and muhurat for this year's Ushay arghya is between 6 AM to 7:30 AM on November 3. Devotees will be offering morning Arghya to sun with water or raw milk

On the fourth day of 'Mahaparv' Chhath Puja, Usha Arghya is performed. Usha Arghya(morning offering) : The offering given to the Sun God in the morning is called Bihaniya Arghya (morning offering). The vrattis (women who observe fast) and the family members again gather at the bank of the river early in the morning and sit there until the sun rises. With sunrise, the morning arghya is offered and the vrattis stand in water with 'arghya' (offerings) kept in sauri or supali. After the Arghya is offered, vrattis distribute 'prasad' with fellow vrattis and devotees present at the Chhath Ghat. Blessings of the elders are sought and people return to their homes as they complete this four-day long festival rituals. After returning from the ghat, vrattis break their 36-hour long fast by taking ginger and water after which the fasting women consume food. This known as Parna or Paran. The vrattis generally have light food to end their 36 hour long vrat.