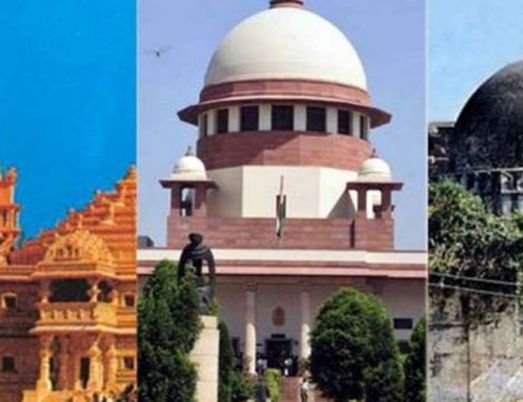 In a unanimous judgment, a five-judge Constitution bench of the Supreme Court Saturday allotted the disputed Ayodhya land to the Ramjanmabhoomi Trust. It ordered the allotment of an alternative piece of five acres of land to the Muslims for a mosque.

The Bench, headed by Chief Justice of India Ranjan Gogoi and comprising Justices S A Bobde, D Y Chandrachud, Ashok Bhushan and S Abdul Nazeer, said the Hindu litigants were able to establish their case that they were in possession of the outer courtyard. It added that the Muslim side was unable to prove their exclusive possession of the inner courtyard.

The apex court has directed the Centre to frame a scheme under which it will constitute a body within three months to hand over the inner and outer courtyard to the Ramjanmabhoomi Trust. It said the Sunni Wakf Board would be granted five acres of land in a “suitable, prominent place in Ayodhya”.

What does the Supreme Court's Ayodhya's judgment means to the main parties involved? Nirmohi Akhara was one of the three parties to receive an equal share of the 2.77-acre disputed land in 2010 ruling by the Allahabad HC. The SC has now its suit, ruling it was barred by time limitation. The Sunni Waqf Board's suit was found to be within time limitation, but said it was unable to prove adverse possession. The SC dismissed a proposal by the Shia Waqf Board. Read more here.

With the Ayodhya verdict coming on the same day as the opening of the Kartarpur Corridor, Pakistan Foreign Minister Shah Mahmood Qureshi has objected to the timing of the judgment. He said he was "deeply saddened" at the "insensitivity" shown at such a joyous occasion, reported PTI.

In its judgment, the Supreme Court has listed out the “net result” of the “evidentiary record”. It has said that accordingly, its relief would have to be “moulded in a manner which preserves the constitutional values of justice, fraternity, human dignity and the equality of religious belief”. Read the court’s findings, in the words of the judgment.

The five-judge Constitution Bench that delivered the judgment in the Ayodhya case said that while Muslims never lost possession of the disputed land, they could not assert the right of adverse possession. What is adverse possession? Click here to read our explainer.

Union Home Minister and BJP national president Amit Shah Saturday welcomed the Supreme Court verdict on the Ram Janmabhoomi-Babri Masjid dispute and appealed people to accept this decision with ease. He also expressed confidence that the judgment will prove to be a milestone in itself.

The situation remains calm and peaceful in the Pune city and the larger district with the administration saying that while it is monitoring situation nothing requiring any big security steps has happened. As per Primary Education Department of Pune Zilla Parishad, most of the schools are anyway closed on Saturday either due to weekend of the longer Diwali vacation. "Some private schools which were to remain open were instructed to declare a holiday on Saturday as a preventive measure," said Suresh Kurhade, Education Officer (Primary). Pune District Collector Naval Kishore Ram said, "Situation is normal in Pune and the whole of the district. We are monitoring the situation and nothing requiring big security steps have happened so far. Section 37 of Bombay Police Act is in force which helps in the preservation of public peace or safety," said Ram.

In case you're just joining us, here are the key points from the Supreme Court judgment in the Ayodhya dispute case.

The Congress party has issued a statement saying it respects the verdict of the Supreme Court in the Ayodhya case, and appealed to all parties concerned to abide by the secular values and spirit of fraternity enshrined in the Constitution and to maintain peace and harmony. "It is the responsibility of each one of us to reaffirm our tradition of mutual respect and unity among all that has defined our society through the ages," the party said.