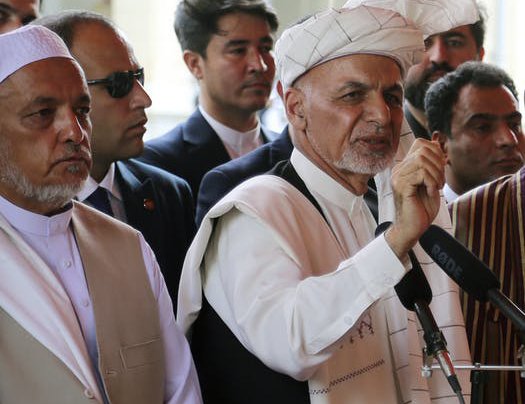 Afghan President Ashraf Ghani appears to have narrowly won a second term, according to preliminary results from September's balloting that were announced Sunday, although his main challenger rejected the outcome as illegitimate.

If the outcome stands despite the complaints of ballot fraud, it could give Ghani the authority he has sought to demand a leading role in peace talks with the Taliban in the country devastated by decades of war.

In a nationally televised address from the presidential palace later in the day, Ghani claimed victory over his main rival, Abdullah Abdullah, who serves as Afghanistan's chief executive in a fragile national unity government..

"We will connect and unite all Afghans," Ghani said. "We will end the crisis and all divisions by building a responsible government."

Ghani and his government have been sidelined during this year's direct talks between the U.S. and the Taliban. Washington wants to withdraw its thousands of combat troops and end 18 years of fighting in Afghanistan, America's longest war.

Ghani won 923,868 votes, or 50.64% in the Sept. 28 balloting, according to the the long overdue preliminary results announced by Hawa Alam Nuristani, head of the Independent Election Commission.

She said Abdullah won 720,990 votes. Although she did not give a specific percentage for him at her news conference in Kabul, he appears to have received 39.52%.

The results have been repeatedly delayed amid accusations of misconduct and technical problems, and Nuristani did not say when final results would be announced.

Abdullah rejected the outcome in a televised speech and also claimed victory, saying the election commission had sided with those who committed ballot fraud.

"There is no doubt based on the clean vote of the people that we are the winner of the election," Abdullah said. He said that what he called "the important stage of the election process" still remains: for the Electoral Complaints Commission to look into separating legitimate ballots from fraudulent ones.

"The damage from fraud and suicide bombing is the same," Abdullah added.

The U.S. State Department said it recognized that the announcement from the election commission "is preliminary, and Afghanistan's Electoral Complaints Commission will need to adjudicate any complaints filed by the candidates."

"We look forward to the final certified results when they are announced," according to the statement from the State Department.

The U.N. secretary-general's special representative for Afghanistan, Tadamichi Yamamoto, said the commission "has an obligation to adjudicate any complaints it receives transparently and thoroughly so the election process may conclude in a credible manner," and that "all candidates have the chance to raise any concerns they may have."

A decision on whether a second round of voting is needed won't be made until final results are released. A runoff is required if no candidate wins more than 50%.

In November, the election commission tried to launch a recount but Abdullah halted the attempt, saying he would not let his observers participate. He eventually allowed the recount to go forward this month.

Thousands of his supporters had rallied in November to protest what they called falsified ballots, and a controversial recount seemed set to favor Ghani.

Afghanistan's 2014 election was mired in accusations of widespread fraud, leading to a political stalemate. The U.S. eventually cobbled together a unity government between Ghani and Abdullah, the two leading contenders, but their partnership has been fraught with bickering and division.

There was no immediate comment from the Taliban who refuse to negotiate with the Kabul government. Ghani has been demanding a cease-fire before engaging in talks, something the Taliban have steadfastly refused.

The Taliban control or hold sway in over half the country and stage near-daily attacks on Afghan government forces and officials or those seen as allied with the government, also killing scores of civilians in the process.