Prime Minister Modi Attempts To Quell The Anger Over CAA

Prime Minister Modi Attempts To Quell The Anger Over CAA 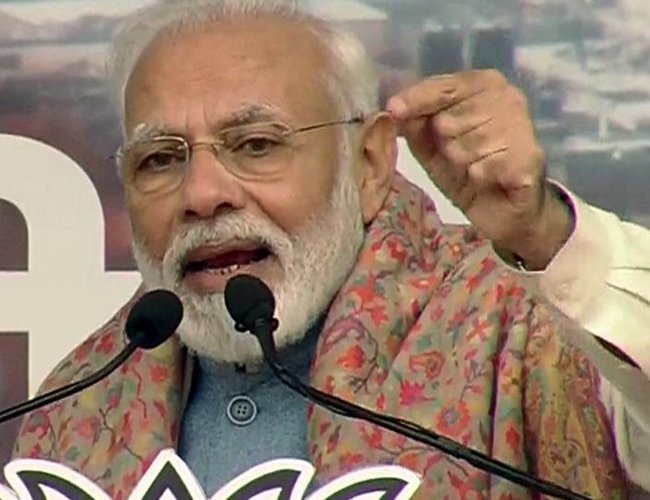 As Delhi and other parts of the country continued to see massive protests, Prime Minister Narendra Modi addressed a mega rally in the heart of the city on Sunday and attempted to quell the anger over Citizenship Amendment Act (CAA). In what looked like an effort to backtrack from BJP and Amit Shah's key promise of bringing a pan-India NRC, PM Modi said his government never discussed the idea.

Speaking at a huge rally at Ramlila Maidan on Sunday, PM Modi said, "Since my government first came to power in 2014, I want to tell 130 crore countrymen, there has never been a discussion on this NRC."

At the same time, Delhi saw multiple protests against the amended citizenship law at different parts of the state. Protest marches were seen in Chennai, Jaipur and other parts of the country as well.

Accusing the opposition of pursuing "divide and rule politics" and stoking violence over the amended citizenship law, Prime Minister Modi asserted on Sunday that CAA and NRC have nothing to do with Indian Muslims as he sought to assuage their concerns amid widespread protests.

Strongly defending the contentious law, PM Modi said at the rally that it is about giving rights to persecuted minorities from neighboring countries and does not snatch anybody's rights, as he made an appeal for peace.

On the National Register of Citizens, Modi sought to allay apprehensions, especially among Muslims, saying his government has never discussed it since coming to power for the first time in 2014. It has been discussed neither in Parliament nor in the Cabinet, Modi added.

This appears to be in sharp contrast of what Home Minister Amit Shah, Defence Minister Rajnath Singh, other BJP leaders and the party manifesto for the 2019 Lok Sabha elections promised.

Death toll in the violent protests in Uttar Pradesh rose further on Sunday and touched 17. The toll in Kanpur rose to three on Sunday with the death of a 30-year-old man who was injured in Friday's anti-CAA protests.

The UP Police in a statement on Sunday said that 879 people have been arrested and 5,312 taken into custody as a preventive measure. In Saturday's violence, a police post was torched in Kanpur.

Priyanka Gandhi raised the demand after meeting family members of the two youths during an unscheduled visit to Bijnor. "The Congress will fight for the families and ensure that justice is done to them. The party will also raise this issue in Lok Sabha," she said, while rasing the demand of judicial probe.

A large number of people hit the streets and took out a 'solidarity march' in South Delhi in support of Jamia students and those facing police action during protests against the contentious law.

Holding placards, people shouted 'Inquilab Zindabad' and demanded scrapping of the law during the march in Alaknanda area. A group of Jamia students also participated in the protest.

Demonstrations against the amended Citizenship Act continued on Sunday in various parts of the country though no major incident of violence was reported anywhere. It all started last Sunday when clashes broke out at the Jamia Millia University in Delhi and police personnel broke into the university.

However, a week later, both Delhi and rest of the country saw peaceful protests as citizens took to streets to raise slogans against the contentious Citizenship Act.

Around 500 members of Islamic outfits and scores of CPI(M) activists staged demonstrations in Chennai on Sunday as protests continued against the Citizenship Amendment Act in parts of Tamil Nadu. While members of the Islamic outfits, including women, staged a protest holding placards in Chepauk, CPI(M) cadres distributed pamphlets in Thousand Lights area.

Curfew clamped in Mangaluru in Karnataka in the aftermath of the violent protests on December 19 was lifted on Sunday for 12 hours from 6 am, as no untoward incident was reported from the city.

Rajasthan chief minister Ashok Gehlot on Sunday led a massive peaceful march called the 'Samvidhan Bacho rally' against the amended citizenship law and demanded that the centre repeal the act, saying it is against the constitution and an attempt to divide people in the name of religion.

Mamata Banerjee said that comments made by her and Modi on the Citizenship Amendment Act (CAA) and the NRC are in public domain, and people will decide who is right or wrong.