Prithvi Narayan Shah: The Rise and Growth The Nepali Nation 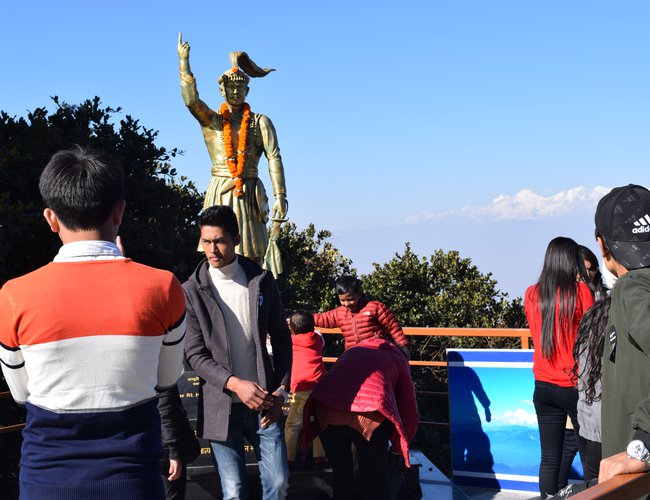 The Shah kings of Nepal, originally belonging to the Ruling House of Gorkha, played a very important part in bringing about the unification of Nepal. Just as Italy was united by the agency of the small Kingdom of Sardinia-Piedmont, so was Nepal united by the rulers of Gorkha, the small hilly state 65 miles west of Kathmandu.

We have seen that the credit for founding the Ruling House of Gurkha belongs to Dravya Shah. Long before Prtihvinarayan Shah embarked upon his ambitious scheme for the incorporation of the Valley in Kathmandu in his kingdom, he predecessors like Ram Shah had already established a name and reputation for themselves as just and far rulers not only among the people of Gorkha but also in the whole of the mountain region. Ram Shah’s name became a household word among the people in the entire mountain region because he had succeeded in introducing standard weights and measures that proved acceptable almost everywhere in the neighboring principalities. Ram Shah’s arbitration and disputes between the Kingdoms of hills were always sought for and accepted. The adage that’ if you do not receive justice, you have to go to Gorkha’ came into vogue about this time. Prithvi Narayan Shah was a descendant of Dravya Shah at the ninth generation and of Ram Shah at the seventh.

The emergence of Prithvinarayan, as a strong monarch in the prevailing chaos and uncertainty at the time of breakdown of the tribal era, was a major factor in the growth of Nepalese nationalism. It was the Gorkhali conquest that gave the country unity and a strong central government. The present Kingdom of Nepal in itself stands as a lasting tribute to the foresight and vision of the Gorkhali rulers and, in a way, represents a full measure of their magnanimity.

The military conquests and annexations of Prithvinarayan and his immediate successors are not so much remarkable in themselves as for the manner in which they led to fleeing of unity and patriotism among the people a whole. Members of the diverse tribes inhaling Nepal joined the Gokhali Army that was ever triumphantly on the march and thus became co-partners in the name tradition of Gorkha. It is of pride in the name and tradition of Gorkha. It is noteworthy that even to this day anyone coming from anywhere in Nepal, irrespective of his caste or religion passes for a Gurkha outside Nepal, and so great is the sense of pride felt by all the Nepalese for the name and tradition of Gorkha that even social and political organizations of the Nepalese domiciled in India and elsewhere are often called Gorkha.

Prithvi Narayan Shah is the hero whose prowess the Nepalese nation owes its existence. By his valiant deeds, Prithvinarayan transformed Gorkhali nationalism into Nepali nationalism and made it immensely more potent and effective.

Ram Shah had extended the kingdom of Gorkha to Rasuwa on the north and to the Trisuli River on the west. Prithvi Narayan in the late eighteenth century had very little hope of being able to extend his kingdom farther west because there it was bounded by big and powerful principalities like Palpa, Lamjung, and Parvat. Nothing was to be gained by proceeding towards the barren, bleak region of Tibet on the north. He had no means of extending towards the South. Only one direction remained open to him: eastwards, towards the Nepal Valley. Prithvi Narayan set himself to prepare for the conquest of Nuwakot towards the east as soon as he became King.

After his conquest of Nuwakot, Prithvinarayan had the mountains caped and explored and set up outposts on the highest point. Once Kathmandu fell into his hands, it did not take him long to take possession of Patan and Bhadgaon.

Thus, the Nepal valley came under the control of Prithvinarayan. A great nation was born. The Gorkhali nation transformed itself into the Nepalese nation. The brave Gorkhali and the artistic Newar became compatriots. Kathmandu now became the center of the loyalty and patriotism of the Magars Gurngs, Newars-all who now composed of the new nation of Nepal.

The consolidation of this newly-acquired political power confronted Prithvinarayan with several problems. He has both internal and external enemies to face. Not long before he acquired control of the Kathmandu Valley, he had successfully repulsed the attack on its led by Kinloch through Sindhuli. Now he had to expel the Capuchin missionaries and the Gosains, who were settled in the valley and were plotting against the newly established state. The saying that ‘With the merchant comes to the musket, and with the Bible comes the bayonet’ had gained wide currency those days.

As soon as Prithvinarayan was infirm to control of Nepal Valley, he set himself to the task of incorporating the Kirat land into his kingdom. Both sections of the ancient race of the Kirats-the Rais and the Limbus- accepted his dominance. In this way, the ancient glory of the Kirats also became a part of the new Nepali nation. And thus did the new nation acquire its cohesion, traditions and skills, its bravery and strength, its courage and vision.

Prithvi Narayan was as great an administrator a he was a warrior. Towards the close of his rule, he worked hard at organizing the administration of his country. The prolonged period of the war had adversely affected trade with Tibet; he started a correspondence with Tashi Lama and Dalai Lama for restoring trade to its former prosperous condition, and trade depots were set up n different areas. The Nepalese people were granted a completed and full measure of religious freedom: Buddhist Newars were permitted to follow their traditional religious and social practices in peace.

In 1775, shortly after he had set himself to the task of organizing a new administration and improving Nepal’s trade, Prithvi Narayan Shah died at the early age of fifty-five. His task was left unfinished. His immediate successors, Pratap Singh Shah and Bahadur Shah acting as Regent for Rana Bahadur Shah extended the bounds the Kingdom from Sikkim in the east to the Sutlej n the west, and a portion of the Terai was also incorporated in the Kingdom of Nepal. The Gorkhali Army reached Digrach and in the north which subsequently involved Nepal in a war with China in 1791.

Prithvi Narayan Shah’s velour statesmanship and administrative qualities fill Nepalis with a sense of pride and glory. As a result of foresight and wisdom, a synthesis of Hinduism and Buddhism exits to this day in Nepal. The strong nation he created was to be for a long time the only free and independent Hindu national in the world.

Excerpts of the article from a book Heros and Builders of Nepal by Rishikesh Shaha, published in 1965 by Oxford University Press.

Nepal To Graduate From The LDC Category By 2026 By NEW SPOTLIGHT ONLINE 1 day, 17 hours ago