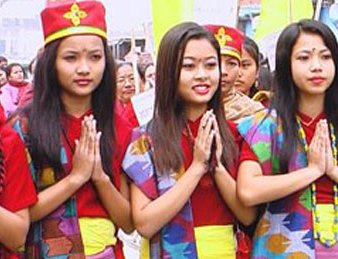 Bagmati Province government has announced a public holiday today in all provinces including Kathmandu Valley on the occasion of Sonam Lhosar which is marked with much enthusiasm by the Tamang community.

Today is Sonam Lohsar. Sonam loshar is celebrated by the Tamangs community dwelling in the central highlands of Nepal as well around Kathmandu Valley. Tamangs are the indigenous people from Nepal. They have their own culture and dialects which distinguish them from other ethnic groups. Tamang means Horse Traders.

Sonam Loshar falls on the first new moon of the month Magh in Nepali Calendar, somewhere in the early January to mid February. So, the date varies in every Sonam Loshar. It is celebrated for 15 days although the first three days have the main celebrations.

The Tamangs clean and decorate their house welcoming the new year and visit the monasteries and stupas in their traditional costumes. Buddhist monasteries perform masked dances and rituals to drive away the negative forces and bring positive for the family and the nation.

In villages, Tamangs decorate their doors and windows with colorful paper and cloth and sweep their houses sweeping all the misfortunes and bringing Good Luck, Long Life and Happiness. Pork, duck, chicken and sweet desert with rice beer and wine are served in family gathering as in cities people gather in a common place and go around the cities rejoicing cultural procession.

According to a notice issued by provincial Ministry of Internal Affairs and Law, the public holiday was announced in line with the decision taken by a cabinet meeting held on January 12.

All institutions under the purview of Bagmati Province government will remain closed tomorrow on account of the cultural festival, stated the Ministry of Home Affairs in Kathmandu.

Losar – the Festival of highlander in Nepal

Losar is one of the main festivals in Nepal. The festival is celebrated in Buddhist religion follower community like Tamang, Sherpa, Gurung and Thakali etc. who live in the hilly and the mountainous region.

Gyalpo Loshar is celebrated by the Sherpa community living in the Himalayan region in Nepal. They have distinct dialect and culture. They are world famous mountain climbers and the first one to scale Mount Everest in Nepal, the highest mountain in the world. People from Tamang, Bhutia and Yolmo too celebrate this festive.

It is the celebration of Tibetan New Year falls that in the month of February in English Calender. It is made up of twelve lunar months and losar begins on the first day of the first month. The day of Loshar begins on the 29th day of the 12th month calendar. It is celebrated typically for almost two weeks. Preparation of festive begins by making special Sherpa snack Khapse,a deep- fried pasty which is commonly eaten during the festive.

The literal meaning of losar is New Year and follows the cycle of 12 years called Lohokor. Barga (Lo)is the special name given to each year and represented by different animals with its reputed attributes like mouse, cow, tiger, cat, garuda, serpent, horse, sheep, monkey, bird, dog and deer. The cycle of animals is arranged in a single circle printed on a paper or a cloth. In Nepal when there was no calendar, the 12 rotation system was used to calculate peoples’ ages.

On the very day of the festival the people visit the monasteries and stupas to pray, worship and have blessing from the monks for happiness and wellbeing. The stupas, monasteries, houses rooftop and mountain top are decorated with new colorful prayer flags and colorful decorative items to bring peace and harmony to the nation. The ethnic people clad in their traditional costumes perform their cultural singing and dancing welcoming the New Year with feasts and family gathering. On the occasion of Loshar the Government of Nepal announces public holidays. So, the festival is celebrated in the full swing across the country.

Swasthanibrathakatha To Conclude Today By Agencies 3 days, 6 hours ago