Holi Festival 2020 Under A Shadow Of Coronavirus

Holi Festival 2020 Under A Shadow Of Coronavirus 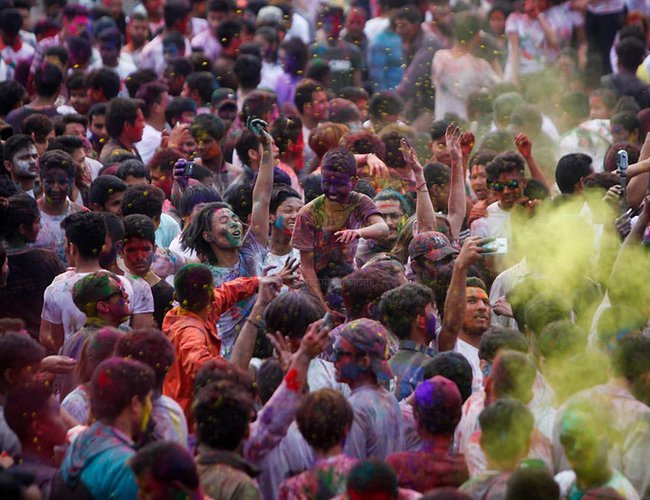 Every festival has its own history, origin and importance. But the one thing which is common to all festivals is that they bring people from all walks of life together and come along with an elaborate spread of traditional delicacies to munch on. Such a practice is most prominently associated with the festival of Colours.

This year the novel coronavirus scare is threatening to play spoilsport in the revelries and fanfare as people from across the country have decided to play it safe. Nevertheless, festivals always usher in happiness and joy. So, let's keep the spirit intact this year too and adopt different ways of celebrating it, while taking all the essential precautions.

The festival signifies the arrival of spring and the end of winter. It is believed that Lord Krishna used to celebrate the festival with colours at Vrindavan and Gokul. On the eve of Holi, bonfires are lit in a ceremony known as Holika Dahan (burning of demon Holika). The ritual symbolises the victory of good over evil. People gather around the fire and sing and dance. The next day, Holi, also known as Dhuli in Sanskrit, or Dhulheti, Dhulandi or Dhulandi, is celebrated.

This year, the festival falls on March 9 in Kathmandu Valley and March 10 in Plain. Holi, which is an official holiday for school as well as office-goers, gives people a day to catch up with their near and dear ones and enjoy a gala time with them. However, this year, amid the ongoing coronavirus outbreak in the country and the world, many have restricted themselves from travelling to another city to meet up with their loved ones. So, if one cannot get to meet their clan, the best they can do is wish them a happy Holi with heartwarming and meaningful messages.

Holika Dahan Celebrated by on March 9 in Kathmandu burning a bamboo erected in Bashantapur, Bhaktapur and Patan Durbar squre, Holi lasts on night of March 9 in Kathmndu Valley. However, it is celebrated southern parts of Nepal on 10 March, starting on the evening of the Purnima (Full Moon day). The first evening is known as Holika Dahan (burning of demon holika) or Chhoti Holi and the following day as Holi.

According to legend, Prahlada, remained devoted to Vishnu and this infuriated Hiranyakashipu. Holika, Prahlada's evil aunt, tricked him into sitting on a pyre with her and as the fire roared, the cloak that Holika was wearing flew and encased Prahlada, who survived while Holika burned. Lord Vishnu, took the form of Narasimha, and then eviscerated and killed the king with his lion claws (which were neither a hand-held weapon nor a launched weapon). The Holika bonfire and Holi signifies the celebration of the symbolic victory of good over evil, of Prahlada over Hiranyakashipu, and of the fire that burned Holika. It is also a festival to forgive, and repair broken relationships.It is also celebrated as a festival of love and is called Rangapanchami in commemoration of the divine love of Radha for Krishna.