A major gas leak at LG Polymer chemical plant in Visakhapatnam has left hundreds sick and at least many dead. Follow live updates from Vizag. 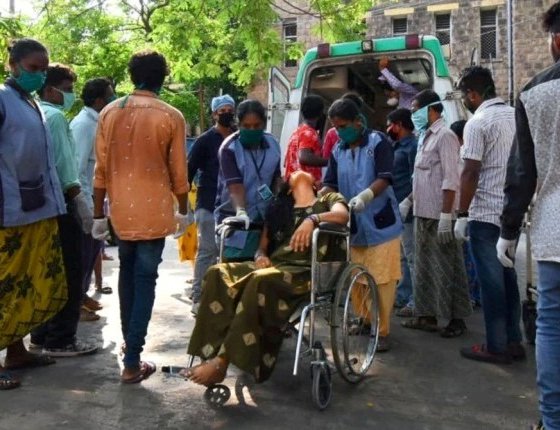 A major gas leak at the LG Polymers chemical plant in Visakhapatnam has left 10 people dead, including a child. Hundreds of villagers were rushed to nearby hospitals in Visakhapatnam with complaints of headache, vomiting and breathing problems reports India Today.

The Visakhapatnam gas leak took place at LG Polymers chemical plant around 2.30 am on Thursday. The death toll has now gone up to seven and the evacuation process is still on in the nearby areas.

Horrific videos and photos surfacing from the nearby villages show scores of people lying unconscious on the roads. Many were seen trying to reach ambulances with unconscious children in their arms.

Chief Minister YS Jaganmohan Reddy has reached Vizag. A total of 193 people, including 44 children, have been admitted to the King George's Hospital. One of the victimS of gas leak includes a medical student of Andhra Medical College University. Two children, including a 6-year-old and a 9-year-old are among the dead. A 73-year-old also sucumbed to injuries after falling down reports India Today.

Initial investigation reveals a gas valve malfunction led to the valve bursting and causing the massive gas leak that has left at least 10 dead. Death toll in the Vizag gas leak incident has gone up to 10.

The spread of styrene monomer vapours in the air depends on the wind speed and currently personnel are working to neutralise the air with chemicals such as 4-tert-Butylcatechol (TBC), a senior official of the Department of Factories said.

LG Chem, based in South Korea, that manages the LG Polymers plant in Visakhapatnam, has said, "The gas leak situation is now under control and we are exploring all ways to provide speedy treatment for those who suffer from inhaling the leaked gas. We are investigating the extent of damage and exact cause of the leak and deaths."

Former Andhra CM Chandrababu Naidu writers to Centre, seeks immediately closing down of the LG Polymers unit. Naidu has also sought a thorough enquiry into the gas leakage. He has said, "Post enquiry, shift the entire unit to Special Economic Zone (SEZ) that has no population in the vicinity."

Andhra Pradesh Industries Minister MG Reddy says, “The company managing the LG Polymers plant has to be responsible for the gas leak. They will have to come and explain exactly what all protocols were followed, and what all were not followed. Accordingly, criminal action will be taken against them.”

Right now gas has been neutralised. One of the antidote is drinking a lot of water. Around 800 were shifted to hospital, many have been discharged. Investigation will be carried out to see how this happened: Andhra Pradesh DGP Damodar Goutam Sawang.

Over 800 people have been hospitalised. The gas has been neutralised now," says Andhra DGP Damodar Goutam Sawang.

Kanwar Groups Call Off Yatra After UP Government’s Appeal By Agencies 2 weeks, 4 days ago