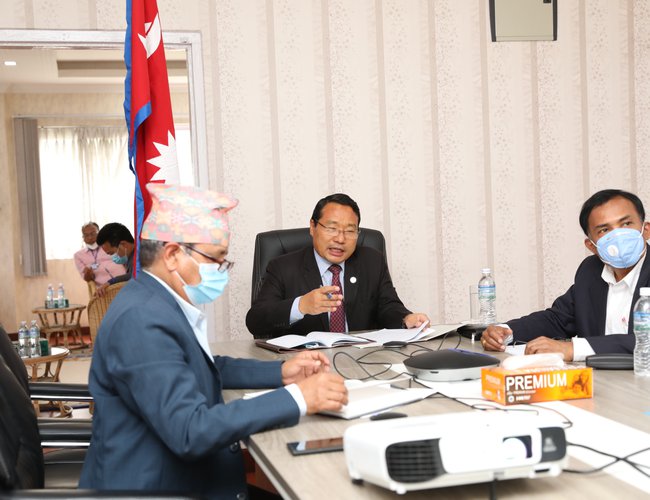 In a virtual meeting today with Faris H. Hadad-Zervos - World Bank Group Country Manager, Minister Pun said that this is one of the attractive projects in Nepal.

He also informed that the project is given high priority in the recently passed annual program and policies of the government. Minister Pun urged The World Bank to take the lead in financial management. He said that the Detailed Project Design (DPR) conducted though The World Bank's assistance is currently at the final stage.

He expressed the hope that the World Bank will take lead in the project. Replying to minister Pun, country manager Faris H. Hadad-Zervos informed that he will convey Nepal’s request to higher officials in the bank.

The government has already approved the proposal in the principal to start the project under a company model through a subsidiary company of Nepal Electricity Authority. Arun Hydroelectric Company has already given responsibility for the construction of the project.

The estimated cost of the project will be around Rs.100 billion. Earlier the Bank has already expressed its commitment to provide over Rs.14 billion concessional loans to Nepal.

According to a press release issued by the Ministry, Minister Pun also requested the World Bank’s country manager to look on any financial arrangement to Nepal Electricity Authority which is facing severe financial crunch due to failure to generate revenue caused by COVID-19.

ADB PROJECTION: Nepal To Grow By 3.1% By A Correspondent 6 hours, 25 minutes ago

Dordikhola To Generate 27 MW Electricity From Mid-July By Agencies 6 days, 16 hours ago