As if a global pandemic was not enough, Nepalis have to now worry about being led towards an uncertain future by a brand-new political system, still not fully on its feet but already teetering towards fratricidal warfare reminiscent of the 1990s. Covid-19 was visited upon an unsuspecting world, a daibi prakop, a mysterious divine retribution against mankind's rapacious economic invasion of nature. But the political instability is the making of our own inept political leaders, which will guarantee that the impending economic downturn will be so much more difficult to face. Where lie the pitfalls, and where should one start looking for a possible opening in the dark tunnel? A good place to start is a re-examination of the assumptions, narratives and supposed facts that we have grown up to accept unquestioningly: it is ultimately such unquestioned "truths" we held to be self-obvious – whether it is regarding the Rana rule, the Panchayat or the party dispensation that replaced it – that got us into this mess, and unless we correct them, won't get us out.

Let us start with the Covid-19 lockdown itself. A frightened populace has self-quarantined itself for two months, more out of a sense of self-preservation than out of deference to government directives. But lockdown is not even a temporary solution: rather it is but a buying of breathing space to prepare the public health system, to strengthen tracing, isolate hotspots and assure adequacy of supplies and equipment in hospitals and health posts. Unfortunately, the political leadership has acted as if this is the only solution: distrust between its ministers meant it could not even purchase needed medical supplies and had to get the army to do it; even though it claims to be a party for workers, it failed its poorest labourers who walked many days to get home from Kathmandu and Indian cities but are stuck either at the border or ill-equipped concentration camps called quarantines; it failed the peasants who are seeing their vegetables rot in the fields even as middlemen importers are able to bring in trucks from India; it has failed students who lose half a year of study, especially those in poorer government schools and colleges not having access to the internet; and most importantly it seems to have lost the trust of its neighbours and governments of countries where thousands of Nepali labourers are stuck in limbo.

In the previous disaster, the 2015 earthquake and the blockade imposed by India, what helped Nepal survive was the fact that we are a country with chronically weak governments but a very strong society that gears up community volunteerism support at the drop of a hat. In this pandemic, with a government mired in multiple corruption and malfeasance scandals, that basic "Nepalipan" seems to have taken a body blow. "Social distancing" (instead of physical distancing), the narrative that it is your neighbours and outsiders that will infect you and whom you should avoid, has destroyed all sense of community self-help, so much so that the people even avoid helping families who have suffered the death of near ones. This goes so much against "Nepalipan" – where the tradition is to even stop ploughing your field and unbridle the oxen to help a neighbour whose family has suffered death – that future development activities might lose a fundamental element of social capital.

To return to the political system that seems unable to live up to the current and future challenges, an important stock-taking has to be of the very nature of our governance. The federal aspect of our system has completely failed to meet the crisis, especially the provinces which are seen as parasitic, good-for-nothing bodies merely sucking up resources and pampering the egos of political cadres. What still functions are the District CDO offices set up during the Panchayat but technically not supposed to exist now since the Provinces should have supplanted them under the new dispensation. Despite the hifalutin assertion of the 2015 constitution that deems Nepal a socialist-oriented country, the actual policies pursued by the ministries of agriculture, the industry as well as labour are exactly the opposite: de-industrialization, discouraging boosting local food production but encouraging its import, and pushing citizens away from local livelihoods towards foreign, sometimes near slave labour, employments.

The failure on the security and diplomatic front is even more glaring. Over the last thirty years, party feudocrats have debased the foreign policy apparatus as they replaced professional diplomacy with ill-informed personal contacts and foreign junkets, and sullied ambassadorial and other appointments to foreign missions as tourism rewards for relatives and party loyalists. The current Limpiyadhura debate on the origins of the Mahakali river (which has formed the western boundary of Nepal since the Sugauli Treaty with British India with current Mughlan-Bharat being merely its successor state) highlights that lacunae. On this front, Nepal as a smaller state has always been reactive: whether it was Mahendra who could not expel Indian intruders (who were supporting a "regime change"Kangressi insurgency from their soil) without risking a major military confrontation (although he did manage to remove seventeen other Indian check posts) or the current leaders who ignored twelve years of Indian road-building on Nepali territory and only woke up at its inauguration.

The failure of the current crop of politicians – including current prime minister KP Oli and former party general-secretary Madhav Nepal – goes back to the problems with the moribund Mahakali Treaty of 1996. It was an UML committee under Oli that argued that the Treaty could only be ratified after thirteen points were settled, the first four of which included Limpiyadhura being the origin of Mahakali as well as the removal of the Indian military presence from that encroached area. These points were passed by the 28th meeting of UML Central Committee on September 4-9, 1996 to iron out differences between their Bolshevik and MaLe Menshevik factions. Unfortunately, the Bolsheviks ignored their own CC injunctions in passing the treaty, which led to the split of their party and which Oli has now been forced to correct a quarter of a century later. 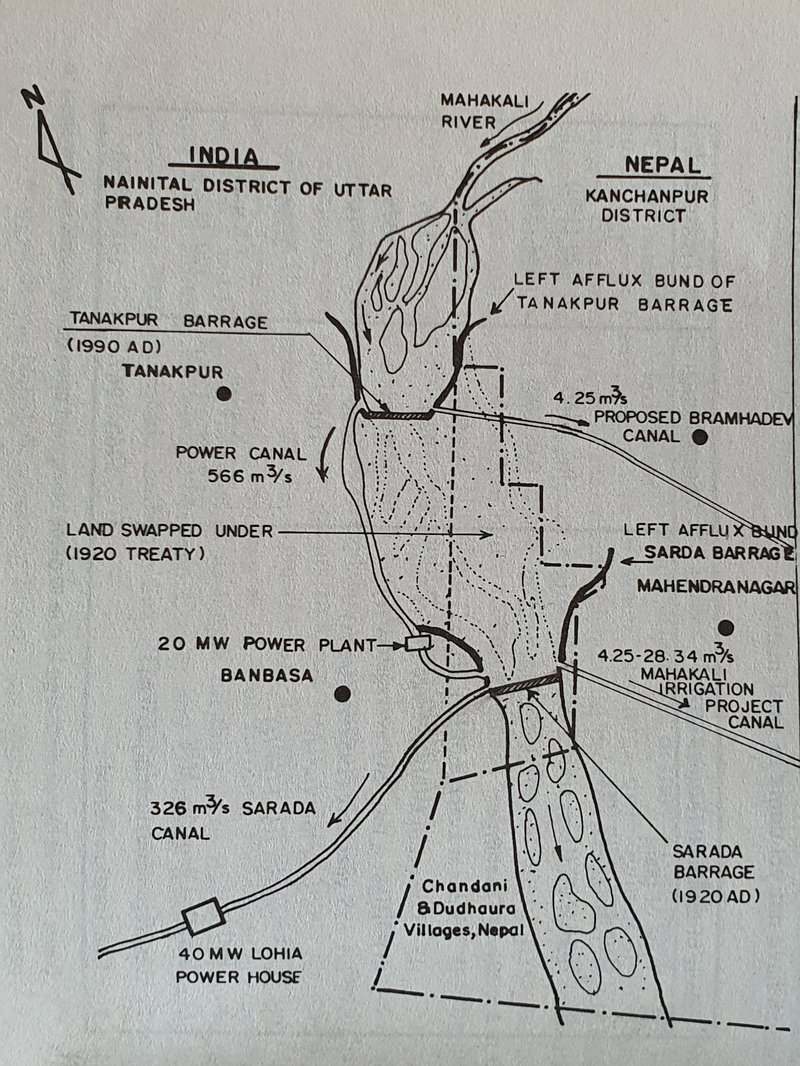 (From Gyawali and Schwank, Swiss-Nepal comparison, Water Nepal vol 4 no 1, 1994)

If anything, this saga highlights how, compared to the Panchayat, the Kangress-Communist combo have debased Nepali diplomacy for personally negotiated benefits (aka12-point Delhi Deal of 2005), but which has now come to haunt them. It is one thing to draw a map showing Limpiyadhura as Nepali territory and quite another thing to actually establish sovereignty over it. It has been compared to the illegal usurpation of land by Maoists during the insurgency: the land title deeds (lalpurja) is held by the landowner but the land and its produce are used by the illegal occupant! And, as with Limpiyadhura, there is no sign of any Truth and Reconciliation diplomacy functioning anytime soon.

Indian, particularly Modi's "muscular diplomacy" has not come out shining either: in moves reminiscent of unilateral Kashmir declaration – which remains under total military lockdown till today with civil liberties suspended – India chose to insult Nepal first by cartographic aggression quickly followed by the inauguration of illegal road construction on Nepali territory. It was Tanakpur afflux bund fiasco of 1985-1991 all over again, only worse because then the Mughlanis asked for permission to actually build the 500 odd meters of the left bund on Nepali territory.

What next? Obviously national unity is the only answer; but Nepal's polity since the overthrow of the Ranas been highly fractured with little attempt to win over the other side. Rather, a winner-take-all system has encouraged the marginalized to try and find solutions from outside the system, whether it was the traditionalists under Mahendra in 1960, the Maoists in 1996 or the Madhesh parties, traditionalists as well as disgruntled Maoist Biplavites, frustrated non-Oli UML or non-Deuba Kangressis under this Loktantrick dispensation. Given that a Westminster parliamentary model – without its concomitant history of unwritten traditions of behaviour and lacking a referee above partisan politics such as a constitutional monarchy – is of no help, there seems to be no option but to create a Big Tent for all forces and see what new governance framework can be arrived at, hopefully peacefully. The problem is that no statesmanship with such vision is visible among the firmament of established political leaders who are suffering a crisis of credibility with too many skeletons in their thirty-year-old closets. Nepalis can only hope some new leadership emerges from among the younger generation, much as Madan Bhandari did in 1990.