Indian Military Has Been Shoring Up Its Strength In Border Areas

Indian Military Has Been Shoring Up Its Strength In Border Areas 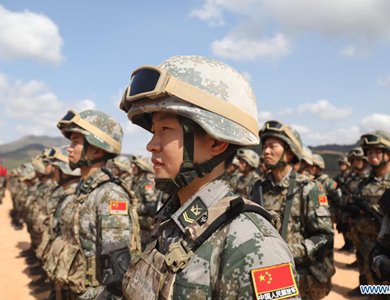 With COVID-19 still spreading around the world, certain groups of people in India, including its military, have seen a rising speculative attitude regarding conflict between China and the US, with a view to possible benefits from the situation. If this attitude extends to India's foreign policy, it will only damage the country's relations with China and hinder its focus on pandemic prevention, as well as the long-term economic recovery.

Many bilateral communications, including top-level meetings, have been postponed due to the pandemic, bringing instabilities to the benign development of the bilateral relationship, even though China and India have seen improved mutual trust during recent years.

China-US relations are worsening amid the pandemic, while India and the US have seen tighter relations. This has pushed a growing speculative attitude among Indian politicians, the country's media and even the military, seeing it is an opportunity for India to seize benefits, such as luring foreign investment to relocate from China, seeking strong bonds with the US and gathering more bargaining chips in foreign relations with China.

The Indian military has also been shoring up its strength in border areas, and since its normal military patrols, troop rotation and deployment might have been affected by the epidemic, it tends to take a tougher and even irrational attitude toward border relations.

China is dedicated to resolving border issues through talks and hopes for implementation of a management and control mechanism agreed by both sides, so as to cool down tensions and uphold a benign direction of bilateral relations. However, if India chooses to irrationally heat up an unfriendly scenario, it will see bad results not only in its pandemic prevention work, but also in terms of economic recovery.

As for the speculative attitude about taking over certain aspects of the industrial chain from China, it is a nearly impossible mission for India in the short term, even though the conflict between China and the US is escalating.

Despite years of promotion of a "made-in-India" campaign and efforts to draw foreign investment in recent years, India still cannot take over China's position in global industrial chains.

Besides the competition with Vietnam and other East Asian countries, India itself still needs massive reform and upgrading, which will be tough for it to fulfill in the short term. It is also a complicated issue to split up production and supply chains. From skilled human resources to sufficient infrastructure, and from labor systems to land systems, these issues cannot be resolved easily. By contrast, China possesses sound infrastructure including ports, road networks, skilled workers and advanced logistics, which are all critical factors for multinationals' strict delivery requirements.

In the meantime, India has not adequately integrated with major international supply chains as it chose to drop out of promoting the Regional Comprehensive Economic Partnership (RCEP) in 2019 after seven years of negotiation. The step put pressure on its exporters who could then not sell overseas with zero tariffs and lost the chance to enjoy reciprocal treatment with trading partners.

The world is now facing mounting pressure due to COVID-19. What India should do is to seek a cooperative relationship with neighboring countries, rather than stirring up a tense atmosphere. As neighbors and two major economies in Asia, it is particularly important for China and India to join hands in various areas including vaccine development, medical material supply and economic resumption, in order to benefit residents in the two countries and also the whole world.

The author is director of the research department at the National Strategy Institute at Tsinghua University in Beijing.

At Least 20 Demonstrators Killed In Myanmar By Agencies 6 months, 1 week ago

Japan To Tighten Restrictions On Arrival By Agencies 8 months, 4 weeks ago

Japan Grapples With Record-level Increase In COVID-19 Cases By Agencies 9 months, 2 weeks ago

Prince Akishino Proclaimed First In Line To Throne By Agencies 10 months, 2 weeks ago