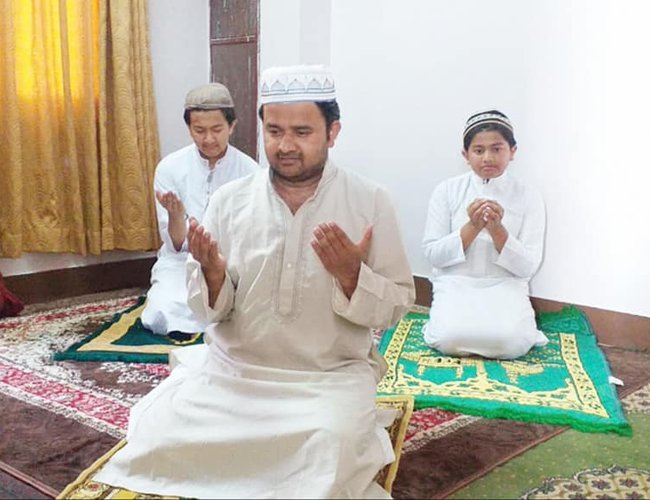 Nepalese Muslim communities are celebrating Eid-ul-Fitr today. Government of Nepal marks the end of the holy month of Ramadan, especially the month-long fasting from sunrise to sunset.

Government of Nepal announces holiday today. He further appealed to people to take precautions and maintain social distancing. “We should stay away from shaking hands and hugging. We should follow government’s guidelines,” said chairman of Nepal Jame Masjid Abdul Mohamad Samim.

One of the most significant festivals that are celebrated by the Muslim community around the world, Eid-ul-Fitr marks the end of the holy month of Ramadan, especially the month-long fasting from sunrise to sunset. Muslims around the world celebrate Eid and wish each other a very happy Eid Mubarak. Eid falls on the first day of the month of ‘Shawwal’. On that day Muslims do not need to fast.

It should be noted that Islamic holidays follow the lunar calendar and not the Gregorian calendar. For a whole month, Muslims around the world fast, which is called roza, and offer prayers while practicing self-discipline. They do charitable acts like feeding the poor and giving them alms. Normally, Eid is a joyous occasion wherein families and friends get together to celebrate the day. Upon the sighting of moon, they wish each other ‘Eid Mubarak’ and exchange hugs and gifts. People wear new clothes and step out. This year, however, because of the pandemic, certain restrictions are in place and Eid will naturally be different.

Muslims around the world on Sunday began celebrating Eid al-Fitr, a normally festive holiday marking the end of the fasting month of Ramadan, with millions under strict stay-at-home orders and many fearing renewed coronavirus outbreaks. This year, many of the world's 1.8 billion Muslims will have to pray at home and make due with video calls.

Some countries, including Turkey, Iraq and Jordan, have imposed round-the-clock holiday curfews. But even where many restrictions have been lifted, celebrations will be subdued because of fears of the pandemic and its economic fallout.

Saudi Arabia, home to the holy cities of Mecca and Medina, is under a complete lockdown, with residents only permitted to leave their homes to purchase food and medicine.

In Jerusalem, Israeli police said they broke up an illegal demonstration and arrested two people outside the Al-Aqsa mosque, which Muslim authorities have closed for prayers since mid-March and will not reopen until after the holiday. Worshippers who tried to enter the compound scuffled with the police. Al-Aqsa is the third holiest site in Islam and would ordinarily welcome tens of thousands of worshippers during the Eid. The hilltop compound is also the holiest site for Jews, who know it as the Temple Mount. The site has long been a flashpoint in the Israeli-Palestinian conflict.

Iran, which is battling the deadliest outbreak in the Middle East, allowed communal prayers at some mosques but cancelled the annual mass Eid prayers in Tehran led by Supreme Leader Ayatollah Ali Khamenei. Iran has reported over 130,000 cases and more than 7,000 deaths.

Indonesia, the world's largest Muslim-majority nation, has reported nearly 22,000 infections and 1,350 fatalities, the most in Southeast Asia. Lockdown orders intended to contain the pandemic mean there will be no congregational prayers at mosques or even open fields, no family reunions, no relatives bearing gifts for children.

In neighboring Muslim-majority Malaysia, businesses have mostly reopened after weeks of lockdown. But mass gatherings are still banned and people are not allowed to travel back to their hometowns for the holiday. Police have turned away more than 5,000 cars and have warned of strict penalties for those who try to sneak home

Swasthanibrathakatha To Conclude Today By Agencies 7 hours, 12 minutes ago