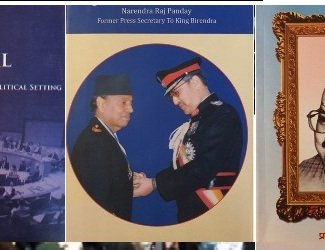 It has been two decades, but 1st June has been seared into the collective painful memory of all Nepalis. The unimaginably gruesome massacre of the royal family that fateful Friday evening is seen as the beginning of a downward spiral of bad days for Nepal that does not seem to end. The national psyche is still very disturbed, and a sense of trust – alarmingly eroded by the malfeasance of political parties in these subsequent two decades – is practically absent in the country. All evidence, even that provided by the formal enquiry commission headed by the chief justice and speaker of parliament, is ignored in favour of outlandish conspiracy theories with any variety of villains one may chose.

Not helping in the healing have been irresponsible leaders of political parties, the Left far worse than others, although Girija Koirala also shares the blame for dropping snide and baseless insinuations when it suited his petty purposes. The most egregious of them all has been ex-Maoist and current communalist Baburam Bhattarai: writing in Kantipur on 6 June 2001 from his Mughlani intelligence-provided safe haven in Delhi, he blamed Girija Koirala, CIA and RAW for the royal massacre. Ten years later, as prime minister he still stood by his outlandish claims,bald-facedly asking for a new enquiry instead of actually having one conducted!

This kind of brazen lying is a hallmark of Nepal's Left. It is also worth remembering current prime minister KP Oli for his heading the UML enquiry into its general secretary Madan Bhandari's death in 1993. Oli not only declared the Dasdhunga car accident a political murder but also claimed he knew who the murderer was. Subsequently, he became home minister, then prime minister but has till date not disclosed what he claimed to know then with such absolute certainty!

Another worthy, then UML general secretary and leader of the opposition Madhav Kumar Nepal fares just as badly, although not for peddling conspiracies but for exhibiting a fatal flaw in character unbefitting of leadership mettle. It was on his advice that King Gyanendra constituted the royal massacre enquiry commission that included MK Nepal as the leader of the opposition. In fact, royal palace insiders mention that, after so advising the king, MK walked out of the king's office but immediately returned back to emphasize with a folded 'Namaste' that he as opposition leader should not be excluded from the commission. The king did so, but MK, rather than fulfilling a national duty, chose to chicken out and resigned from the commission even before the inquiry had formally started. When asked of UML leaders why their leader displayed such a brazen act of pusillanimous irresponsibility, they said, "Oh! Our general secretary is a simple man and we feared the palace might bamboozle him, so we pressured him to resign!"

Despite the abject failure of New Nepal's new political class to display leadership and bring a healing touch to the country, a different set of Nepalis (civil servants, generals, professionals, journalists etc.) are putting pen to paper and bringing out reminiscences of their experiences during King Birendra's reign. They help in damping down the damage done by outlandish, self-serving political narratives of the party-political class that has already ruled Nepal longer than the Panchayat did. While it will require many more accounts to emerge to set historical facts fully straight, three recent books describe King Birendra, the man and his reign in a manner that is a far better tribute to his memory.

Architect Bharat Sharma has written in Nepali his encounter with the king who asked him to help with the landscaping of Nagarjung summer residence as well as with Narayanhiti palace, Pashupati temple and several other projects. A very personal account, it nevertheless brings out King Birendra as an essentially democratic and soft-hearted person quite willing to listen to views contrary to his own. A picture also emerges of the "palace culture" of the Praetorian guards, their obsequiousness, back-biting and petty scheming bureaucratic conspiracies. Not specifically, but the book gives indications of Queen Aishwarya's growing influence in state affairs, something King Mahendra never allowed Queen Ratna or his brothers to even come near.

Founding editor of The Rising Nepal and Nepal's Deputy Permanent Representative to the United Nations Mana Ranjan Josse gives his readers a 567-page hefty tome describing Nepal's diplomatic balancing act. Its three parts cover a broad overview of key national security issues including Nepal's Zone of Peace proposal and her diplomatic skills in acquiring non-permanent membership of the UN Security Council; second, external and domestic challenges to the Nepali state, primarily with the Maoist insurgency; and the third part is a collection of Nepal's geopolitical encounters with US, China, Bangladesh and Pakistan. While covering a wide swathe of events and players, what emerges about King Birendra's three-decade rule are his seminal contributions to keeping afloat Nepal's strategic independence despite blatant external political interference and proxy wars he faced.

King Birendra's major diplomatic success was his Nepal as a Zone of Peace proposal formally announced on 25th February 1975 at the concluding farewell reception of his coronation even though he had indicated its outline in July 1973 while addressing Nepal Council of World Affairs. It was not envisaged as a Swiss-type neutrality but as a more active non-alignment to institutionalize peace; and by 1990 it had received the support of 116 UN member states. India was the only major country not to support it; and, after the overthrow of the Panchayat system in 1990 and the restoration of the 1957 multi-party Westminster model of Indian-type democracy, Nepali Kangress and the UML jettisoned the ZoPpropsal unceremoniously and undiplomatically.

Today, these parties have to answer before history two difficult questions. Had they not dumped the ZoP proposal, would it not have been much more difficult for the Mughlanis to attempt regime change in Nepal using the Maoists during King Birendra's constitutional monarchy rule and subsequently during King Gyanendra's rule via the 12-point Delhi Deal? With the Kalapani-Lipulekh map war going on, there is talk of finding a diplomatic solution. Question: with this lot having squandered Nepal's diplomatic gains that garnered the support of 116 countries and having sidelined the institution of monarchy whose achievement it was, how are they going to convince those countries to support Nepal?

Narendra Raj Pandey was King Birendra's press secretary who had taken permission from the king to bring out a book of his recollections upon retirement. Unfortunately, the palace massacre took place a year later and Pandey himself succumbed to cancer a dozen years after. It is his unfinished manuscripts which have been collected and published by his children residing in the US with all the editorial shortcomings such efforts entail. Besides interesting historical and personal glimpses, the most valuable part is a 34-page section titled "Birendra's Off the Cuff Observations". I would have called it, taking after Prithvi Narayan Shah's DibyaUpadesh, "King Birendra's Divine Counsel for His Nepali Successors in the 21stCentrury". There are thirty topics – ranging from monarchy and Maoists to judiciary, constitution, political parties, relations with India, China, Japan etc., water resources, NGOs, Hinduism, proselytization and others – on which the king has expressed his deep insights and views that every Nepali should reflect on. They were as true under his three-decade rule as they are today and will remain so tomorrow as long as Nepal remains.

A post-Corona world will present Nepal with new geopolitical challenges and a revisiting of the country's strategy for survival will demand of a new generation of political leaders capable of revisiting its history of successes and failures to draw an appropriate plan for the emerging new world order. The Panchayat was not one monolith event but clearly had three distinct phases: the first decade of Mahendra's foundation laying, the second decade which saw Birendra's active rule culminating in contradictions that the national referendum was unable to resolve, and the final third decade when needed political reforms stalled and Panchayat lost its elan vital.

The multi-party, Westminster model of political governance has lasted slightly longer than the Panchayat, and it shows five distinct phases: first, revitalization till the mid-1990s; second, relapse into old problems of fratricidal in- and intra-party battles including the challenges posed by the rise of the Maoist insurgency till the royal massacre; the third, constitutional crisis of house dissolution and Mughlani regime change of 2006; fourth, a prolonged 10-year interregnum till the 2015 earthquake; and finally the fifth till date, with a hastily passed constitution that represents the third attempt to implement an unsuitable Westminster model. Its contradictions and mal-governance, with the additional burden of federalism and the bypassing of the country's traditional governance ethos, have become so glaring that there is open talk of political collapse.

This juncture is precisely where a serious re-thinking of what the country's indigenous governance framework should look like has become a pressing need.