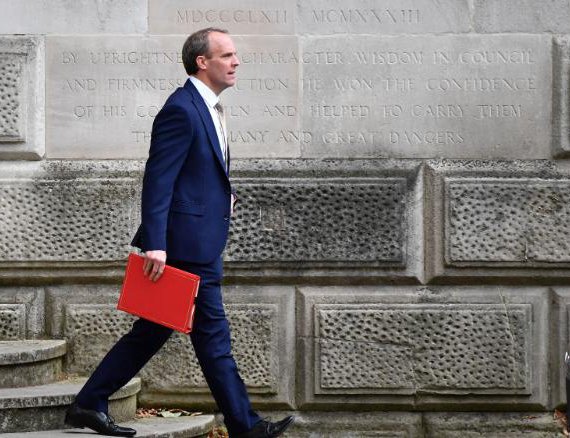 British Foreign Secretary Dominic Raab has questioned whether China can be trusted to live up to international obligations after its move to introduce a new security law for Hong Kong, which London says contravenes the historical agreement handing over the territory to Beijing.

"China freely assumed international obligations to the United Kingdom ... in relation to the way that it would treat Hong Kong and in particular, would respect the autonomy and freedoms," Raab said. "It's a matter of trust, and lots of countries around the world are asking this question -- does China live up to its international obligations? Because if they can't be trusted to keep their word on Hong Kong, why would they be trusted to live up to their wider international responsibilities."

London has said it will provide a path to citizenship for hundreds of thousands -- potentially millions -- of Hong Kongers, as a result of the security law.

That law gained new teeth Monday, as Hong Kong's government unveiled new "implementation rules" under the legislation, drastically expanding police powers to search and order potentially-illegal material online to be deleted for the purposes of "preventing, suppressing and imposing punishment for any acts and activities endangering national security."

Under the new laws -- which were passed without consulting the city's parliament -- police can search properties without a warrant in special circumstances, can freeze assets, intercept communications and require internet service providers to remove information.

The US has moved to sanction Chinese and Hong Kong officials responsible for the law and undermining freedoms in the city, something Raab said that UK has not ruled out.

Speaking in the House of Commons after the passage of Magnitsky-style sanctions targeting overseas officials accused of human rights abuses and involvement crime, Raab was asked about targeting China under the new law.

"I am not going to pre-empt or pre-judge further designations now," he said. "But we're already working on what the next wave might be".

Raab announced the new rules in the House of Commons on Monday, along with the details of the first wave of sanctions which includes 25 Russian nationals "involved in the mistreatment and death of auditor Sergei Magnitsky" and 20 Saudi nationals involved in the murder of journalist Jamal Khashoggi.

Raab said it's the first time there has been a "UK-only regime," adding it gives the country "the power to impose sanctions on those involved in the very worst human rights abuses right around the world".

"This extends beyond state officials to non-state actors as well. So if you're a kleptocrat or an organized criminal, you will not be able to launder your blood money in this country."

Also included in the first wave of sanctions are two "high-ranking Myanmar military generals involved in the systematic and brutal violence against the Rohingya people and other ethnic minorities" and "two organizations involved in the forced labor, torture and murder that takes place in North Korea's gulags," a written statement from the Foreign Office said.

Raab said the new legislation would send a clear message that "the thugs of despots" and "the henchmen of dictators" would no longer be welcome in the UK. "(They) will not be free to waltz into this country and buy up property on the Kings Road, to do their Christmas shopping in Knightsbridge, or frankly to siphon dirty money through British banks or other financial institutions," added Raab.

Over 10 Reportedly Killed In Myanmar Protests By NEW SPOTLIGHT ONLINE 2 days, 4 hours ago

Elections Is Just A Month Away: Alliance Is Making Is Making By Agencies 5 days, 3 hours ago

US Carries out Airstrikes In Syria By Agencies 5 days, 3 hours ago