India and Nepal must return to the core strength of their unique social, cultural, strategic, political, and economic ties 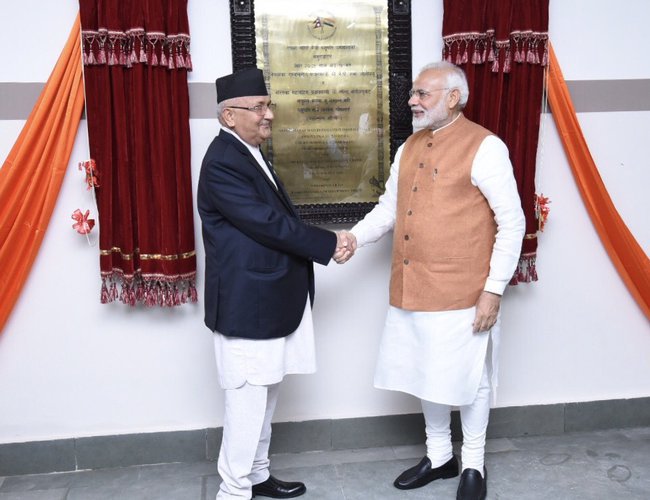 India and Nepal share deep social, cultural, strategic, political, and economic ties that have been forged over many centuries. Unfortunately, ties wither if exposed to the changing fundamentals of time. India-Nepal ties have frayed slowly as the economic bonds between the two countries have failed to keep pace with India’s modernization and growth. The opportunities offered by India’s prospering economy have become increasingly inaccessible, and thereby irrelevant to ordinary Nepalis.

The persistent border dispute between the two countries is an opportunity for them to modernize old ties towards a shared vision of prosperity. India and Nepal must do more than merely resolve boundary issues. They must return to the core strengths of their unique social, cultural, strategic, political, and economic bonds and modernize ties to directly connect its people, markets, finance, and technology.Link

Old ties have fallen into state of disrepair

Thousands of people in India and Nepal cross the open border every day to work, buy, sell, and transact businesses. India remains Nepal’s dominant trade partner, steadily accounting for approximately 60-65% of all trade with Nepal even as other countries, such as China have made significant inroads in the last few years. But behind the numbers on India-Nepal trade is a complex network of informal arrangements across borders that has made it possible. Cousins deal with one another across the borders; business associates with sons and daughters married into each other families. Lenders and suppliers that offered credit based on family references. Cash that moved easily across the border.

Such informal ties and the simplicity of those traditional businesses are now under stress. The Indian economy is modernizing, transitioning from the informal into the formal economy. Contracts are being required. Complex documentation is needed to move products across borders. Stronger controls are making it difficult to move cash and make payments. The India-Nepal border that had once never prevented cousins, brothers, sisters, friends and associates from doing business with one other has now become a boundary that separates.

For many small and medium Nepali businesses, it is now easier to trade with China. This isn’t because China has rendered India uncompetitive. Rather, the rules have made it harder to do business with India.

SMEs are being left behind

India-Nepal trading agreements still carry vestiges of old rules. For example, Nepali traders cannot import products from India that are not manufactured in India. Today’s global scenario has changed: multi-national companies have set up in India and generally assign the responsibility of the whole South Asian region to their India office. Large businesses work around these by routing trading agreements through the third country, but small businesses are unable to do that. Instead, doing the equivalent business in China is much easier.

Despite open borders, complex regulatory requirements have complicated import-export between the two countries. This is disproportionately felt on small businesses. From import-export codes to harmonized product codes and invoice sanctity, the practical complexity of trade often leaves it open to a high level of the discretionary authority of local customs officials – a sure way to frustrate those seeking to do business. A large business that consistently do business find ways to get around this but opportunistic (or spontaneous) trade, which are often small in volume, are significantly hurt by these rules. The end result: opportunistic trade opportunities that are often the basis and spark for longer-term investments are simply put off because the transactions take too much time.

The historic complex informal economic network that is the bedrock of India-Nepal trade will not modernize on its own. But these are the ties that will bind – they cannot be left to wither. Decision-makers must recast these ties: modernize and make it relevant again to the people that share in its benefits. With China now a factor directly or indirectly influencing India-Nepal relations, decision-makers must act swiftly to remove anomalies blocking economic engagements. They must allow people across the borders to share in each other’s growth just as they did before.

Government to government means nothing

Once the single largest source for Foreign Direct Investments (FDIs) in Nepal, India has seen its position erode with growing Chinese investments. In 2019, for instance, China accounted for approximately 40% of new FDIs against India’s 30%. The relative decline in Indian investments in Nepal reflects two underlying factors.

First, the socio-economic ties between India and Nepal have failed to adapt rapidly enough. That network was the main driver of investments in the past: it identified opportunities, secured investments, and facilitated its flow. As these socio-economic networks have lagged, particularly by failing to modernize from the informal to the formal, Indian investments have declined. Second, the Indian government stepped in to lead India’s investment foray into Nepal. The story about growing Chinese investments in Nepal was cast in geo-political terms as the dwindling of Indian influence. India responded by committing investments backed up by its government.

This strategy has undermined India’s efforts in Nepal, further eroding the historic economic ties between people of the two countries. Government of India’s involvement, or at least its announced intention of directly leading investments in Nepal, crowded out the formal and informal networks that had fuelled Indian investments in Nepal in the past.

It also changed the complexion and narrative of India-Nepal relations. Instead of it being about the old relationships between people and cultures, India-Nepal economic ties became about governments with all sorts of geo-political nuances.

While India’s government focused on engaging Nepal’s government through bilateral and government-to-government investments, China, on the other hand, enabled its firms to connect directly with the people of Nepal. Many small Chinese firms arrived in Nepal. They found local partners and invested in wide range of enterprises across sectors.

In 2019, for example, approximately 1,500 Chinese firms had received approvals for FDIs in Nepal. This was twice the number of Indian firms that had been approved for foreign investment. But on average, Chinese firms were investing much smaller amounts per project than Indian firms. The investments by Chinese firms in Nepal were far more granular and much closer to the businesses and lives of ordinary Nepalis.

While the government of India and Nepal focused on doing business between themselves, underneath where it really matters, a new economic network between the people of China and Nepal has taken shape.

The political class is not permeable

For Nepal, this is an era of exciting change. New awakenings and aspirations have taken roots. Like other governments, India has also rushed to engage with Nepal’s new government. But India’s relationships with Nepal is broader than engagements with governments alone. It works, for instance, directly with many young people and communities across Nepal.

Sadly, these Indian development initiatives that seek to connect directly with Nepalis have been sabotaged. Consider the example of scholarships that India provides to Nepali students for higher education in Indian institutions. While technically based on merit, many of the scholarships are awarded on the recommendations of Nepal’s political class. The awards fuel a network of patronage and but fails to make India’s growth accessible to Nepalis in need.

India also works directly with communities and local organizations supporting a wide range of development projects (e.g., building the school, health centers, energy projects, providing ambulances). Most of projects, however, go to places where there is a clear political connection. While such projects provide development benefits to people in the area, the local politician harvests a much richer dividend. India’s approach of connecting with the people of Nepal is being undermined by local intermediaries. The political class in Nepal, even under the new dispensation, thus far, haven’t proven to be been any more permeable than the ones before. Development dividends don’t flow through so easily.

Nepali aspirations have been unshackled. India must recognize this. As an immediate priority, it must realign its geo-political and economic outlook on Nepal to craft a new approach that allows ordinary Nepalis to access the opportunities India’s economic growth offers. There are many things that India and Nepal could do to modernize ties. They could create modern business hubs that enable young tech-savvy Nepali entrepreneurs to connect with India’s innovations. It could offer credit lines that small and medium enterprises could directly access for cross border trade and investments. It could harmonize and ease cross border trading rules. Most importantly, it must encourage Indian and Nepali businesses to speak with each other and provide them the confidence that their governments want them to succeed.

Centuries of social, cultural, political, strategic, and economic ties can only remain strong if they can remain relevant to changing times. The governments of India and Nepal must reset the narrative, modernize their policies, and get out of the way so that the ties between people thrive again.

The views expressed above belong to the author(s). New Spotlight reproduced the article originally appeared in ORF research and analyses.