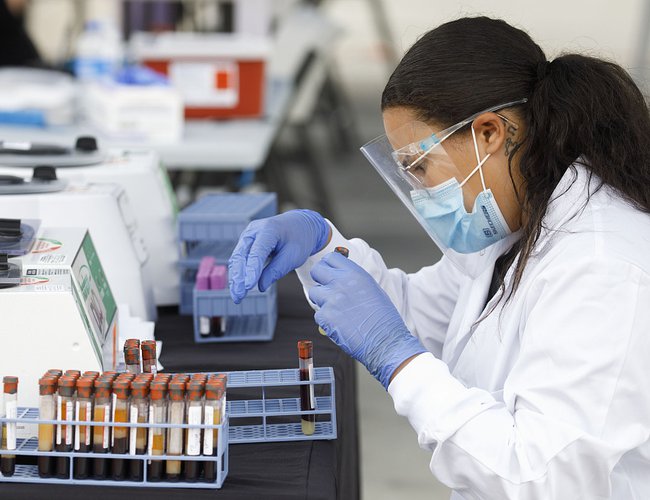 Globally, more than 19.6 million COVID-19 cases have been confirmed, with some 727,000 related deaths. Behind the US, Brazil has reported more than three million confirmed infections and some 100,000 fatalities.

India has the world's third-highest confirmed caseload, at more than 2.15 million, followed by Russia and South Africa, at some 885,000 and 553,000 infections respectively.

There are now over 19.7 million confirmed COVID-19 cases globally, with over 728,000 fatalities and more than 12 million recoveries, according to the latest tally from Johns Hopkins University.

As of Saturday, the Chinese mainland has recorded 84,668 cases with 283 asymptomatic patients under medical observation. The death toll stands at 4,693, including 52 fatalities from the Hong Kong Special Administrative Region (HKSAR) and seven from the Taiwan region.

The U.S. has exceeded 5 million infections and recorded over 165,000 deaths – both totals are by far the highest of any country in the world. President Donald Trump on Saturday signed a series of executive orders to extend certain COVID-19 economic relief policies. One of the four orders will extend extra unemployment benefits through the end of the year, but at a reduced level of 400 U.S. dollars per week.

Brazil on Saturday surpassed the grim milestone of 100,000 coronavirus deaths and 3 million cases of infection.

New Zealand marked 100 days without a domestic transmission of the coronavirus on Sunday.

Several countries, including the Philippines, Australia, the UK, and some other European countries are tightening coronavirus prevention measures, such as stricter mask-wearing rules and reimposed lockdowns in the face of a virus resurgence.

With an average of over 1,000 deaths per day since the end of May and ​nearly 3 million officially reported cases, the country is the hardest hit in the world after the United States.

Turkey's President Recep Tayyip Erdogan said on Sunday that two COVID-19 vaccine candidates have successfully completed the animal tests, and one of them has received ethical approval to move on to clinical trial on humans.

The U.S. has recorded 5.04 million cases of COVID-19 as of Sunday evening. Microsoft co-founder Bill Gates said on Sunday that U.S. coronavirus testing has "mind-blowing" problems and described the current procedures as slow and lacking fair access.

The number of COVID-19 infections in the United States surpassed 5 million on Sunday, according to data released by Johns Hopkins University, with over 162,000 deaths reported.

The grim milestone was reached on Sunday, according to a tally compiled by Johns Hopkins University, with new infections running at about 54,000 a day.

While that figure is lower from a peak of more than 70,000 in the second half of July, cases are rising in nearly 20 states and related deaths are climbing in most.

Russia on Sunday reported 5,189 new coronavirus infections in the past 24 hours, bringing its national tally to 887,536.