Fall Armyworm (Spodoptera frugiperda) is now also damaging maize crops in the mid-hills of Nepal. Recently, the country recorded invasion of the desert locust (Schistocerca gregaria) damaging crops in over 1,000 hectares of cropland.

There are many remarkable incidences of biological invasions on all continents around the world that affect human health, food production, ecology, and economies. Nepal is not an exception. In the last few decades, Nepal has recorded invasions of serious pests and human pathogens, as well as invasive plants and animal species disturbing natural ecosystems. Incursions of Tuta absoluta in 2016 and Fall Armyworm (Fauji Kira) in 2019 have been particularly detrimental to tomato and maize crops, respectively. Fall Armyworm (Spodoptera frugiperda) is now also damaging maize crops in the mid-hills of Nepal. Recently, the country recorded invasion of the desert locust (Schistocerca gregaria) damaging crops in over 1,000 hectares of cropland.

Historically, incursions of the desert locust throughout Asia have been frequent. In India, the desert locust invaded several times in the nineteenth century, with the country experiencing serious locust outbreaks in 1812, 1821, 1843-44, 1863, 1869, 1878, 1889-92, and 1896-97,and several times in the twentieth century. Nepal, perhaps for the first time, had a notable desert locust invasion in 1962, and thereafter in 1996 and 2020. In 1962, the Kathmandu Valley experienced large swarms of desert locust causing major damage to crops, while in 1996, locust swarms caused crop losses in Bara, Mahottari, Chitwan, and Makwanpur districts (outlookindia.com; Mandal, 2020). After 24 years, the desert locust entered Nepal in June 2020, with potential risk to the country’s agricultural sector.

On June 27, the first locust swarm entered Nepal from India at three locations in the central parts of the country – Rupandehi, Bara, and Sarlahi districts – between 7-9 AM, and flew northwards up to the river valley towards Palpa, Dhading, and Sindhuli. The swarm contained about 1 million locusts. Subsequently, on June 28 and June 29, 2020, two swarms again entered Nepal and the size of the swarms amounted to 2.5 million locusts. Few were seen in the Kathmandu Valley on June 29,2020. The second batch of locusts entered Nepal on July 12, 2020, with three locust swarms entering the country between July 12 and July 15. A group of locusts entered Nepal via Dang and another two groups via Mahendranagar and Nepalgunj. The group of locust swarms traveled to Pyuthan from Dang and damaged maize crops in different areas including Swargadwari Municipality and Pyuthan Municipality of Pyuthan district. On July 16, a smaller swarm of locusts again entered through Nepalgunj.

Fortunately, Nepal is not on the locust’s regular route. According to FAO, some groups of desert locust may drift to Nepal from the swarms that reach India. These are locusts that voraciously feed on vegetation, but have not yet been reported laying eggs anywhere in Nepal. This is likely because desert locusts require desert-like sandy soil as their breeding grounds, which is not prominent in Nepal.

According to the Locust Information Center in Nepal, the locusts damaged maize grown in nearly 1,100 hectares of land of the two districts Surkhet and Pyuthan (National Plant Protection Office/Plant Quarantine and Pesticide Management Center-PQPMC, 2020). The loss caused by the second batch of locusts is comparatively higher than the first batch of insects.

The desert locust is termed “Salaha” in Nepali. It is native to Africa, preferring a semi-arid, desert environment for breeding, hence referred to as desert locust. In 2019, it moved east in swarms of millions of individuals through Arabia, then moved from West Asia to South Asia in search of food. It entered South Asia through Pakistan, then from India to Nepal in 2020. The desert locust can fly very fast, sometimes 500 km in a day along the direction of the wind. The locust swarms contain more than 150 million insects, forming a cloud-like shape in the sky. These swarms can destroy vegetation in their path and eat the food of 25,000 people in a day, and after destroying the vegetation, move further in search of food. Green vegetation is preferred by the desert locust, and swarms can convert a green area into a leafless area in a short time. Locusts do not attack animals or people, nor do they carry any diseases. 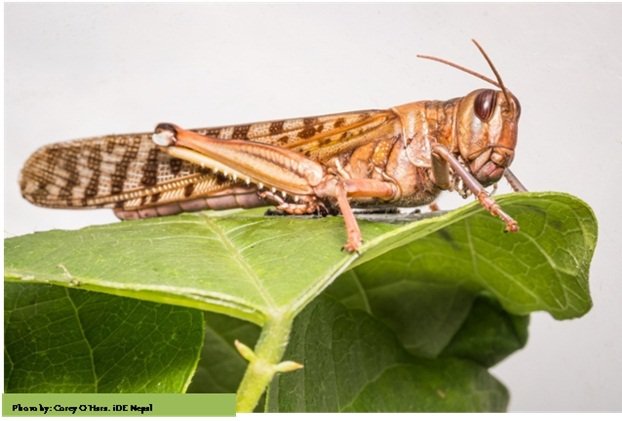 Nevertheless, Nepal is still not necessarily a suitable breeding ground for locusts. These large swarms are regularly breaking off and forming smaller groups, flying haphazardly in the sky and moving throughout the Terai and mid-hills of Nepal, especially the mid-hills. However, the locusts that reached Pyuthan from Dang moved into Nepal’s mountainous area, so there was little concern about further damage to crops (NPPO/PQPMC, 2020). Out of the country’s 77 districts, 55 have observed the presence of locusts. As per the Plant Quarantine and Pesticide Management Center’s (PQPMC) initial estimate, around 7-8 million locusts have entered Nepal, and over 3 million were assumed to be actively flying around the Nepal sky in groups that can potentially damage crops. The remaining locusts have either died off or gotten separated from their large swarms.

These locusts have mainly caused low to moderate damage to maize crops in the mid-hill districts. Apart from maize crops, there have been reports of minor damage to soybean, and some vegetable and fruit crops in Nepal. The locusts damaged crops in Surkhet and Pyuthan especially, as the two districts had not received rainfall, and this pest thrives in drier conditions.

Climate change and its impact on monsoons is perhaps one of the causes of locusts’ range expansion. Soumya Sarkar (June 2, 2020, Mangabay) states that the warming of the Indian Ocean due to climate change is the main reason for the proliferation of locusts, and such swarming is more likely in the future. Increasing dryness in the atmosphere is also assumed to attract locust swarms.

Nepal’s Ministry of Agriculture and Livestock Development (MoALD) realized the threat of the locust in time and formed a task force on May 26, 2020, one month ahead of its incursion in Nepal, to prepare for the possibility of desert locust invasion, especially since the pest had caused so much damage in neighboring India. The taskforce’s technical committee has been educating civilians, farmers, and provincial level technical staff on management of the locust and has produced various educational and communications materials on locust identification and management. The Locust Information Center has been established by PQPMC/MOALD to provide current information on the locust invasion and damage in Nepal to stakeholders.

While it appears that the current locust damage in Nepal is not too severe, local people, predominantly farmers have attempted to disturb and divert locusts with loud noises and smoke in the fields to protect their crops.Management measures, including chemical control, have been recommended by the Desert Locust Taskforce of the Ministry of Agriculture and Livestock Development-Government of Nepal .The ultimate goal in locust control is the use of preventive and proactive methods that disrupt the environment to the least possible extent. Upon receiving the message of locust swarm invasion, farmers may also take the following .traditional and non-chemical desert locust control measures : (i) Smoking or making loud music,heavy noise, (ii) Beating or trampling on the hoppers, (iii) Trapping of the desert locust, and (iv) Shaking the crops.

- If a hopper band is formed and observed marching, ignite dry grass or any trash in front of the marching hopper band to kill the nymphs or dig a trench 2 feet long and 2 feet wide in front of marching hopper band and then apply Quinalphos 1.5 % SP OR chlorpyriphos1.5 % DP or Methyl Parathion 2% DP dust in the trench. Or, if the water is available, pour water in the trench by mixing it with Nimbecidine EC @ 20 to 40 ml/liter & Bio-Magic 1.15 % WP formulation @ 20 to 40 gm/liters of water.

Key recommendations are focused on the need to coordinate and control operations throughout the country in order to avert significant impacts on food security and people’s livelihoods in the provinces and to establish a sustainable mechanism to manage future locust invasions and outbreaks which are expected to become more frequent due to climate change. As the locust incursion is not confined to any particular country in South Asia, strong collaboration among countries in the region can contribute immensely to the management of this pest.