COVID -19 And The Rule Of Law In Nepal

Navigating the uncertain crisis and leading a stable recovery will hinge upon Nepal’s ability to strike a balance between protection against the virus and protection of the rule of law.

Eight months after the first case of COVID-19 was detected in Nepal, the pandemic rages on with little respite for the state or its citizens. With infection rates and death toll on the rise, Nepal’s struggle to flatten the curve is not only frustrating – resorting to repeated lockdown with no discernible effect – but also a serious public health concern. Beneath the lackluster performance in managing the public health crisis, particularly disconcerting is the government’s apathy towards the rule of law. Empirical evidence suggests a causal correlation between the rule of law and public health meaning lack of progress in the rule of law will create structural barriers to an already stretched public health response. During these testing times, navigating the uncertain crisis and leading a stable recovery will hinge upon Nepal’s ability to strike a balance between protection against the virus and protection of the rule of law. 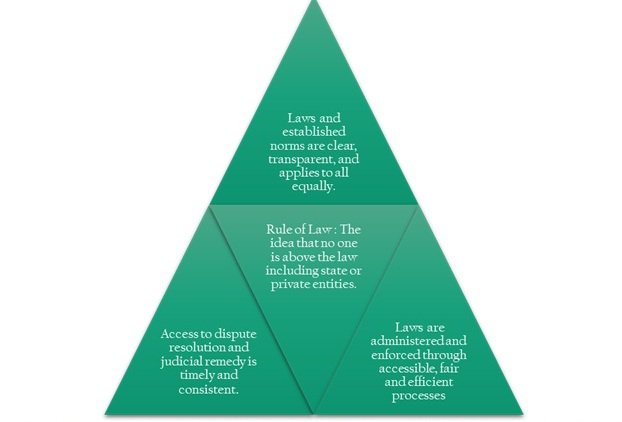 What is the rule of law?

The pandemic has struck Nepal in the midst of a governance transition of historic proportions. Emerging out of the devastating earthquake in 2015, the country had been on a slow but steady march transitioning into an uncharted federal structure. With successful federal, provincial and local elections in 2017, the country and its newly elected representatives were poised to cement the building blocks for more responsive and effective governance as well as more inclusive economic development.

However, progress on these fronts had fallen short of the expectations of many. Alarmingly, in the years leading up to the pandemic, evidence continued to mount signaling a gradual erosion of adherence to global principles of good governance, human rights and rule of law. The pandemic has certainly accelerated the backsliding in Nepal at a time when the country stands at a crossroads.

As the country grappled with the harsh reality of dealing with yet another crisis, all the ingredients that undermine the rule of law became evident. Like many countries around the globe, in March 2020, the Nepal government responded with a countrywide lockdown and a forceful presence of security actors. The distribution of emergency aid, medical supplies, and relief packages provided ample opportunity for corruption and fraud. Infringements to individual rights guaranteed by the Constitution became second nature. Often these infringements went beyond what was necessary, adequate or proportional to the situation. Prison overcrowding, unmanaged quarantines, case backlog in the justice system, unequal access to health care and social services exasperated systemic challenges already faced by vulnerable groups. Restrictions on movement stranded thousands of migrant and daily wage workers longing to return home. Reports of increased domestic violence, communal unrest and gender-based violence surged. Closed courthouses delayed and canceled proceedings, postponed trials and judicial scrutiny risked further erosion of constraints on government powers.

Fast-forward five months, the government would have emerged unscathed from scrutiny had it managed to keep the crisis under control. Concerns of shrinking civic space, rule of law erosion and corruption would’ve been swept under the rug with narratives of success stories and effective leadership stealing the limelight. Unfortunately, Nepal has neither been able to contain the pandemic nor has it been able to halt the rule of law erosion. In fact, the sustained effect of the pandemic and lethargy in response threatens irreversible damage not only to the physical integrity and life of people but Nepal’s quest for democratic stability and economic prosperity.

Despite the gloomy state of affairs, there are three beacons of hope: One, demonstrated by many countries around the globe, the pandemic provides an opportunity to formulate rapid and radical policy changes. Fortunately, this aligns with Nepal’s current priority and pressing need to draft (and amend) dozens of policies – such as emergency powers, police/security sector reform and combatting gender-based violence - to implement the new Constitution. The foundation has been laid by a progressive Constitution that safeguards democratic values, human rights and rule of law. However, as key actors maneuver and reposition their interests and power in the evolving landscape, Nepal will need to garner sufficient political will and ensure policy reform is informed by evidence and information providing a clear understanding of the complex changes and ground realities. Meaningful participation of citizens, civil society, and the private sector in policy-making will be equally important to avoid decisions made in haste and/or purely based on individual or institutional incentives and power. Ultimately, rule of law requires willing citizens and criminological research suggests that people will only be willing if they feel that the law is fair, applies to all equally as well as transparently and proportionate to the circumstances.

Second, just as the need to address justice concerns rose, justice providers around the world have had to either limit or close operations. The impact of this has been particularly devastating to vulnerable populations. As countries struggle to respond to increasing access to justice concerns, positive examples such as - shift to digital technology, adoption of community/alternative dispute resolution mechanisms and expansion of legal aid support have demonstrated the efficacy of broadening conventional justice pathways for citizens. Nepal is fortunate to have a relatively strong alternative dispute resolution, traditional or community-based justice system that can help reduce the burden on formal judicial mechanisms. During the pandemic, these community-based networks played an important role in coordinating containment strategies, sharing health information and distributing relief to communities. While tailored digital technology remains a distant dream, for now, more robust investment in community-led mechanisms and institutional will is required to make access to judicial remedies more responsive to the needs of citizens in terms of time, cost, and efficiency. The benefits will be particularly significant for the poor, women, and vulnerable groups.

Third,it is no secret that parliaments and executive bodies look to expand their powers during times of emergency. Some countries allow this exception, albeit with a sunset provision, to enable governments to adopt extraordinary measures to combat a crisis. However, more often than not, this exception leads to the outcry of misuse of authority and impunity for powerholders. In times of crisis, the legitimacy of key institutions of restraint – mainly media and judicial bodies –becomes even more crucial in balancing the rule of law equation with key institutions of representation – legislative and executive bodies. Like many other developing nations, Nepal is not immune to attempts of curtailing press freedom and judicial independency by the legislative and executive. Fake news and excessive judicial overreach have become the mantra for government and ruling political class obsessed with shoring-up their political agendas, stifling opposition and silencing critical overview. Granted, the media and judicial bodies in Nepal are not devoid of controversies, politicization, or mismanagement. In contrast, somewhat ironically, they garner much larger public trust than institutions that directly represent the people – i.e. legislative and executive bodies. During the pandemic, as bastions of the public will, media and judiciary have often been at loggerheads with parliamentary and government-enforced initiatives. Dozens of Supreme Court orders, media coverage of excessive force by police and corruption have compelled the government to change tack. Despite this, timely implementation remains a challenge. Therefore, maintaining public trust and integrity of these institutions of restraint is indispensable for Nepal’s maturing democratic process and rule of law. Simultaneously, strengthening strategic alliances between the media and judiciary may seem counterintuitive but has the potential to exert more pressure on institutions of representation to curb their expansionist approach and hold them accountable to the public.

In 2016, President Obama stressed that“one of the challenges of a democratic government is making sure that even in the midst of emergencies and passions, we make sure that rule of law and the basic precepts of justice and liberty prevail.” (2)These words ring true more now than ever. If history has taught us anything, for better or for worse, the world will not be the same after the pandemic. Consequently, Nepal will not be the same either. History has also shown that countries with a strong rule of law foundations tend to recover faster following a crisis. If Nepal wants to be on the right side of history, it needs to strike the right balance between protection against the virus and protection of the rule of law. The question is whether we can learn our lessons and do what needs to be done. Otherwise, further erosion will certainly spell trouble and risk Nepal drifting back into political instability just as it is trying to emerge out of it.

Game On For TMC In Bengal By Sambridh Ghimire 1 day, 20 hours ago

I Can’t Breathe. We Heard Those Words In America And Our World Was Shaken. By Scott DeLisi 5 days, 6 hours ago

Labor Day 2021 For Safety And Health: By Shanker Man Singh 1 week ago

BRI And Nepal By Prakash A.Raj 2 weeks ago