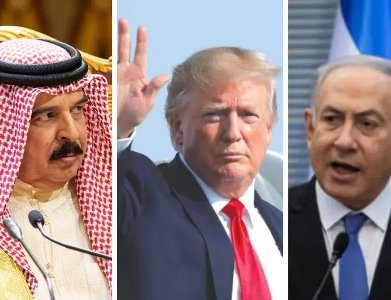 Bahrain has joined the United Arab Emirates in striking an agreement to normalize relations with Israel, President Donald Trump said on Friday, a dramatic move aimed at easing tensions in the Middle East.

Trump tweeted out the news after he spoke by phone to both Bahrain’s King Hamad bin Isa Al Khalifa and Israeli Prime Minister Benjamin Netanyahu, the White House said.

Trump also tweeted: "Another HISTORIC breakthrough today! Our two GREAT friends Israel and the Kingdom of Bahrain agree to a Peace Deal – the second Arab country to make peace with Israel in 30 days!"

"This is a historic breakthrough to further peace in the Middle East," the United States, Bahrain and Israel said in a joint statement.

"Opening direct dialog and ties between these two dynamic societies and advanced economies will continue the positive transformation of the Middle East and increase stability, security, and prosperity in the region," it said. Netanyahu said the agreement marks a "new era of peace."

"For many long years, we invested in peace, and now peace will invest in us, will bring about truly major investments in Israel's economy - and that is very important," Netanyahu said in a video statement.

The king of Bahrain reiterated the necessity of reaching a fair and lasting peace between the Israelis and Palestinians, based on the two state solution, in a call with Netanyahu and Trump, Bahrain's state news agency BNA said on Friday.

"The declaration of the establishment of relations between #Bahrain & #Israel is in the interest of the region's #security, stability and prosperity," Bahraini Ambassador to the United States Abdulla R. Al-Khalifa tweeted. " It sends a positive and encouraging message to the people of #Israel, that a just and comprehensive peace with the #Palestinian people is the best path and the true interest for their future and the future of the peoples of the region."

Jared Kushner, Senior Advisor to the president called the agreeement "a historic breakthrough for the president and also for the world and for those two countries. On the anniversary of 9/11. That is the best thing that we can do to prevent another 9/11 from ever happening is to create peace and to aggressively counter extremism and terrorism. And President Trump is spared no effort in doing that."

In a briefing to the press following Trump's announcement on the White House-brokered deal, Kushner also addressed questions about the possibility of additional agreement with other countries in the Middle East, such as Saudi Arabia.

“There's a new momentum and new hopefulness in the Middle East,” said the senior advisor. “The agreement that we made with the United Arab Emirates and Israel was even more popular than we expected, which is why this next agreement came so quickly. We were not sure what the reaction would be, but it's been overwhelmingly positive. And more and more countries are rushing to try to figure out how they can do good things for their citizens and create a paradigm for a much more peaceful and prosperous future.”

“The leaders in the region recognize that the approach that's been taken in the past hasn't worked and they realize that there are people want to see a more vibrant and exciting future,” Kushner continued. “I do believe that it's an inevitability that all countries in the Middle East will normalize relations with Israel. It's a very hard thing. I don't know the timing on it, but I think people want to see the Middle East move forward. They want to seize opportunity.”

“I think that this will help reduce tension in the Muslim world and allow people to separate the Palestinian issue from their own national interests, from their foreign policy, which should be focused on their domestic priorities. And so I think you're going to continue to see momentum,” he noted.

Erdan later had a conversation with Bahrain's ambassador to the UN, Jamal Fares Alrowaiei. According to Israel's Mission to the UN called the conversation "warm" and said that the two congratulated each other. The two also reportedly "also agreed to meet to discuss cooperation in the UN on issues of innovation and economic development for the benefit of the two countries."

"Expanding the circle of peace in the Middle East can lead to a change at the UN as well," Erdan said. "We are entering a new era in which we can publicly work together on security issues and the economic prosperity of Israel and the Arab countries. Together, we will face the challenges that threaten stability in the Middle East."

Ivanka Trump, the president's daughter and advisor also tweeted about the historic event.

Increasing Calls For The Government Of PM Narendra Modi To Lock Down
May 10, 2021
China's Sinopharm Offers 'Substantial Support' For COVAX: WHO
May 08, 2021
Nepal Appeals For COVID-19 Vaccines As Cases Rise
May 04, 2021
Situation In India 'Beyond Heartbreaking': WHO Chief
Apr 27, 2021
AstraZeneca Vaccine Doses In U.S. Should Go To Hard-hit Countries: Business Group
Apr 24, 2021

Rockets Rain On Tel Aviv As Violence Expands By Agencies 6 hours, 19 minutes ago

Concerns Rise Over Tensions In Jerusalem By Agencies 1 day, 6 hours ago