Demise Of Chief Justice And First Nepalese Ambassador To Egypt 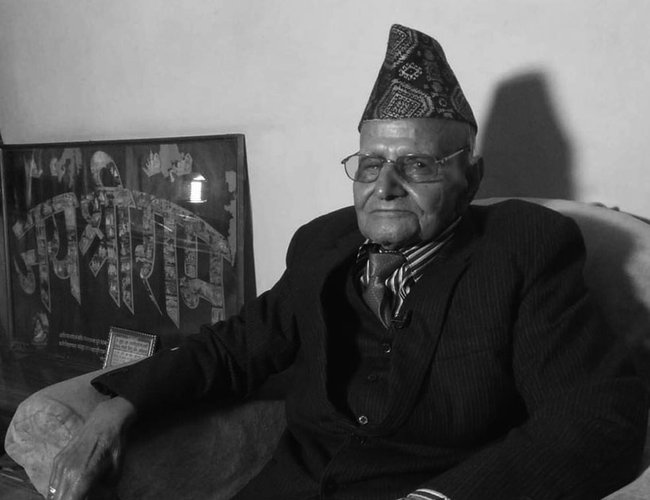 We are sad that Anirudha Prasad Singh is no more. We express our profound condolences on the sad demise. We pray for peace for the departed soul. The news was first broken by a senior diplomat who told us rather in friendly satire that we may note this matter too as a point of record given what he preferred to say our penchant to record things.

It is a matter of coincidence that we were interacting with a senior Foreign Secretary only yesterday to talk about him. So was the case when Bijaya Kumar Mishra, an academic brain in the legal fraternity, was in contact with us only the other day when we talked about him and our interest in interviewing him for the last one year as we had met him more than a decade earlier.

After all, we could not succeed and as advised by Prof and Advocate Mishra, we shall consult his detailed interview in Kanun magazine to supplement to what he had told us earlier. We have no hesitation to admit that with limited brain and limited exposure in comparison to other foreign services or foreign secretaries, we always try to somehow compensate these shortcomings through interactions and guidance from seniors.

After going through the news, we are again convinced of the fact that our diplomacy and Ministry of Foreign Affairs (MOFA) are badly overwhelmed and even encroached by other agencies and actors of the government and outside if not totally marginalized or sidelined. One reputed former Foreign Secretary told us once that MOFA is only in focus during the rat race (another prominent diplomat wished to term this as penguin procession) for seeking ambassadorship irrespective of background, merit or exposure.

Singh held a number of high profile portfolios during his long innings of a century. He was Badahakim, Minister, Chief Justice, Chairman, Public Service Commission (PSC), Chief Commissioner of anti-corruption agency, etc. We are told that after 1951, he was perhaps the only Chief Justice not to hold any law degree.

We are a bit surprised that nobody talks about his days as the first Ambassador of Nepal to Egypt after we decided to have the first diplomatic mission in Africa during the tenure of Jharendra Narayan Singha as Foreign Secretary. It is a matter of irony that Singha might have never realized that given his already high profile role as Ambassador to Moscow and New Delhi besides Foreign Secretary and two earlier stints in New Delhi and London, he would one day be sent to this station to represent the country in succession to Singh.

Anirudha Prasad Singh thus becomes the first centenarian Ambassador of Nepal as we have some nonagenarians like Prof Sardar Yadunath Khanal, Jharendra Narayan Singha, Nayan Bahadur Khatri and Vedananda Jha who are sadly no more, at least two others who are with us, Yog Prasad Uapdhyay and Khadga Jit Baral.

To go once again to late Singh as regards MOFA, let us refer to his role in ensuring that no arbitrary action is taken in terms of admission of civil servants without passing through the set provisions and guidelines of the PSC. It brought him into conflict with not only the first elected government of Nepal but also another high-profile bureaucrat, Narapratap Shumshere Thapa. He stood like a rock as he told us once and this story has been told in detail by at least three stalwarts of foreign service, Udhav Deo Bhatt, Kedar Prasad Koirala and Bishweshwar Prasad Rimal who are no more and four more like Bindeshwari Shah, Yadab Kanta Silwal, Bishwa Pradhan and Bhanu Prasad Thapalia who are with us to share their rich experiences.

Another bureaucrat who may be called the best pillar of the PSC including his pioneering role in strengthening the constitutional agency, for his sterling contributions, Bhuwan Man Singh Pradhan was all-praise for Singh for his strong stand and his inimitable style of decision-making. Prof. Surendra Bahadur Shrestha who also served in various capacities including Ambassador, recently related his first-hand experience with Singh during the oath-taking ceremony of the first elected government.

Once again, our heartfelt condolences on the sad demise of the stalwart who served the country in various capacities.

Nepal's Over Dependency And Sluggish Development By Hari Prasad Shrestha 8 hours, 9 minutes ago

Nepal Is Bearing The Disproportionate Burden Of Climate Change By BHARAT RAJ PAUDYAL 3 days, 12 hours ago