In a nutshell, the book tends to focus on Nepal's perpetual state of instability basically in the post-1950 political firmament with increased pressure on aspects of stability in the post-1996 period. It pinpoints major blame on perceived weakness of domestic elements including political leadership of all hues to correctly identify, project and protect the country's national interest.

Maj Gen Purna Bahadur Silwal (retd.) has attempted a wonderful endeavour in studying Nepal's rather endemic instability with its underpinnings on political, military, economic and diplomatic fronts from a new perspective. The book with a tell-tale title, NEPAL'S INSTABILITY CONUNDRUM: Navigating Political, Military, Economic & Diplomatic Landscape, promises to analyse Nepal's situation especially prevailing in the post-1950 era. The book with an attractive cover showing a precarious state of instability that the country has been forced to undergo is divided into seven compact chapters including concluding observations, apart from seven annexures and comprehensive bibliography, tables and figures. 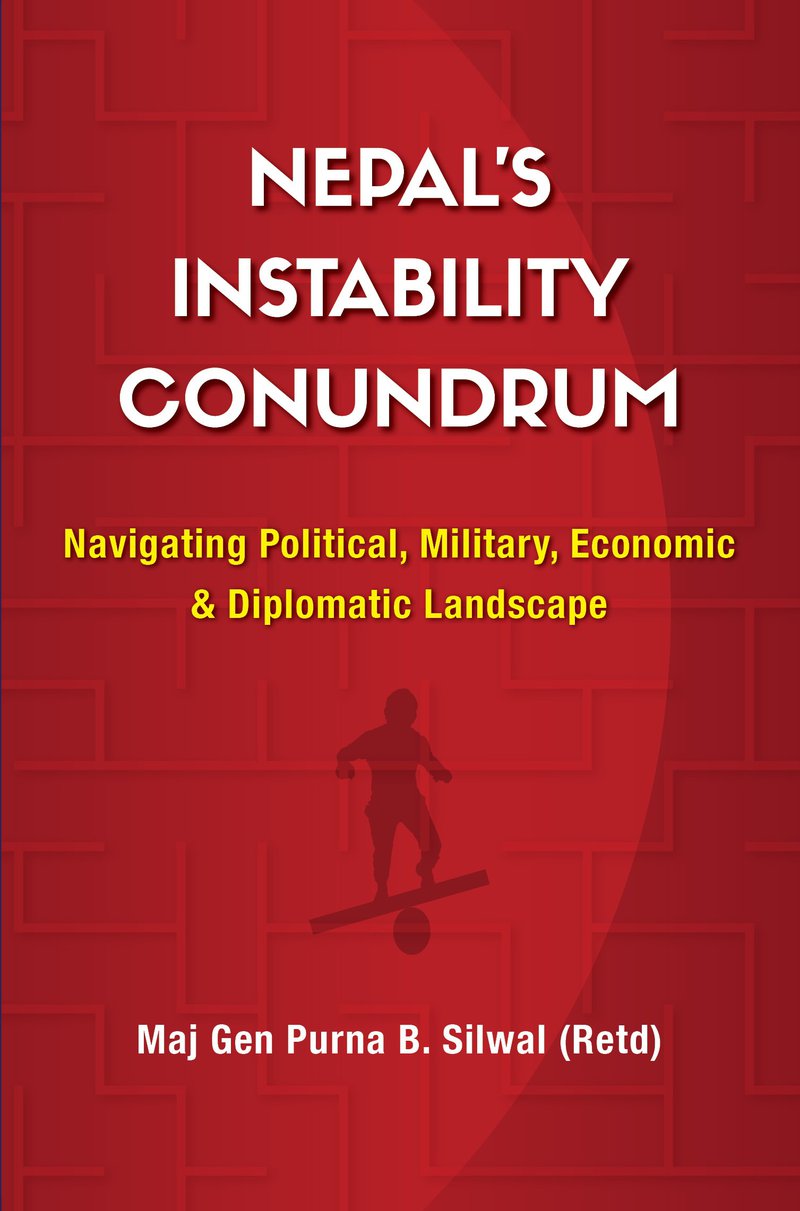 With a Ph.D. and intellectual bent of mind, Silwal is a serious and low=profile officer and has enviable academic and training credentials with wide exposures to both foreign academic and defence institutions, and the United Nations with rare services of both a practicing diplomat and a peacekeeper. Besides, he has handled core assignments in the Nepal Army in various capacities.

The first chapter of the quite readable book is brief but prognostic in the sense that it gives a short background of Gorkha that had about 12,000 households with no visible resources to reckon with but emerged and metamorphosed into a viable state of Nepal thanks to the astute leadership provided by the architect of modern Nepal, King Prithvi Narayan Shah the Great. The author has coined an interesting terminology, Prithivian Trinity, denoting success to marshal and mobilize Leadership, Peasants and the Military in unison and coherence under his dynamic leadership.

In a rather very short account, he has attempted to study a wider canvas involving a survey of three ideologies that came into being after 1950, monarchy, democracy and communism. The chapter also depicts Maoist armed insurgency, comparatively swifter transition with both chaotic and peaceful forms, from constitutional monarchy to a republican order, perceived status of Nepal-India special relationship, and external influence on the domestic polity.

The second chapter deals with more technical aspects of national security and its concept and strategy. With a brief historical perspective, the author tends to focus on Nepal's national interest, culture and core values and various other elements impinging on national security threat. Chapter three dwells at length Nepal's domestic political culture and rather perpetual state of instability with emphasis among others, on sheer politicization of security agencies and counter-insurgency campaign with symptoms of incompetence in change-management, negative influences of royal massacres and royal takeover, India's excessive interference, amd personal and political chemistry of Nepali leadership.

The third chapter of the book relates to Domestic Political Culture and Instability. Though primarily concentrated on the perpetual state of instability, the politicization of institutions including security apparatus and frequent changes of governments in the country, the writer lists the tenures of as many as fifteen governments during the period of almost the same period (sixteen years) from April 1990 to April 2006 during what is called Twin Pillar System involving constitutional monarchy and parliamentary system.

He has also given a list of eleven spells of short-term governments during what the author prefers to call transition era involving a period from April 2006 to February 2018 when K.P. Sharma Oli took over as Prime Minister for the second time, this time with almost two-thirds majority promising political stability, socio-economic progress and full-term government. In line with the prognosis of the writer but well after the publication of the book, even this government was forced to relinquish office primarily because of divisions in the party and loss of majority leading to the assumption of the office of Prime Minister by Sher Bahadur Deuba for the fifth time.

The Fourth Chapter deals with Civil-Military Relations, Stability and Security. The chapter traces the historical origin of civil-military ties dating back to the unification days of King Prithvi Narayan Shah the Great to recent days both during the Twin Pillar System and political transition with the declaration of the country as a federal democratic republic. It also talks about the role of the palace in the pre-republican era and the context and aftermath of what is called the Katawal Episode when the first Maoist government headed by Prime Minister Pushpa Kamal Dahal Prachanda took a decision to summarily dismiss the Chief of the Staff of the Nepal Army that sent a shock wave leading to the fall of the government.

Chapter Five devotes to State Response to Maoist Insurgency and its various dimensions. It is now almost an open book how Maoists mobilized their strength, its external dimension and their modus operandi. It is entirely a different matter altogether that three Maoist governments had short-lived existence and the Maoist party itself underwent splits with its internal fissures coming to the ground, not to speak of the denudation of its supposed support base.

The longest and most interesting part of the monumental book both from the viewpoint of foreign relations but also from the strategic perspective is in Chapter Six. The chapter entitled External Influence: Interest and Strategy of India, China, US, UK and Nepal is 102 pages long giving comprehensive treatment of convergence and divergence of security and foreign policy interests of major powers that have a role to play in our context both from the historical considerations and recent status. It is quite understandable that on a comparative standpoint, the treatment given to India's foreign policy and security objectives overshadows such depictions of other countries.

The author concludes his observations with a rather pessimistic approach on various aspects including state of political leadership wedded to narrow parochial, partisan and even personal interests rather than broad national interest. He also poses questions if the republican order is strengthened or the special relationship with India is a matter of past.

In a nutshell, the book tends to focus on Nepal's perpetual state of instability basically in the post-1950 political firmament with increased pressure on aspects of stability in the post-1996 period. It pinpoints major blame on the perceived weakness of domestic elements including political leadership of all hues to correctly identify, project and protect the country's national interest. It particularly laments the abysmal failure of political leadership to rise above and beyond partisan and short-term interests, not to speak of their chances of becoming mere pawns in the hands of external forces leading to increased foreign interference. The author has also depicted the appalling state of politicization of Nepal's state institutions.

As a long-time friend who was in Bangladesh for a staff course when I was posted in Dhaka as Deputy Chief of Mission, I congratulate Gen Silwal on the publication of such a wonderfully comprehensive treatise that is a welcome addition to the fields of literature on political, military, security, economic and diplomatic aspects of Nepal that seem to have undergone more dissensions and hemorrhages than cohesion and consolidation that should have been the norm.

A former Foreign Secretary, Ambassador and Foreign Policy Adviser, Bhattarai is an author involved in the study of Nepal’s foreign relations from a historical perspective. He is available at kutniti@gmail.com. 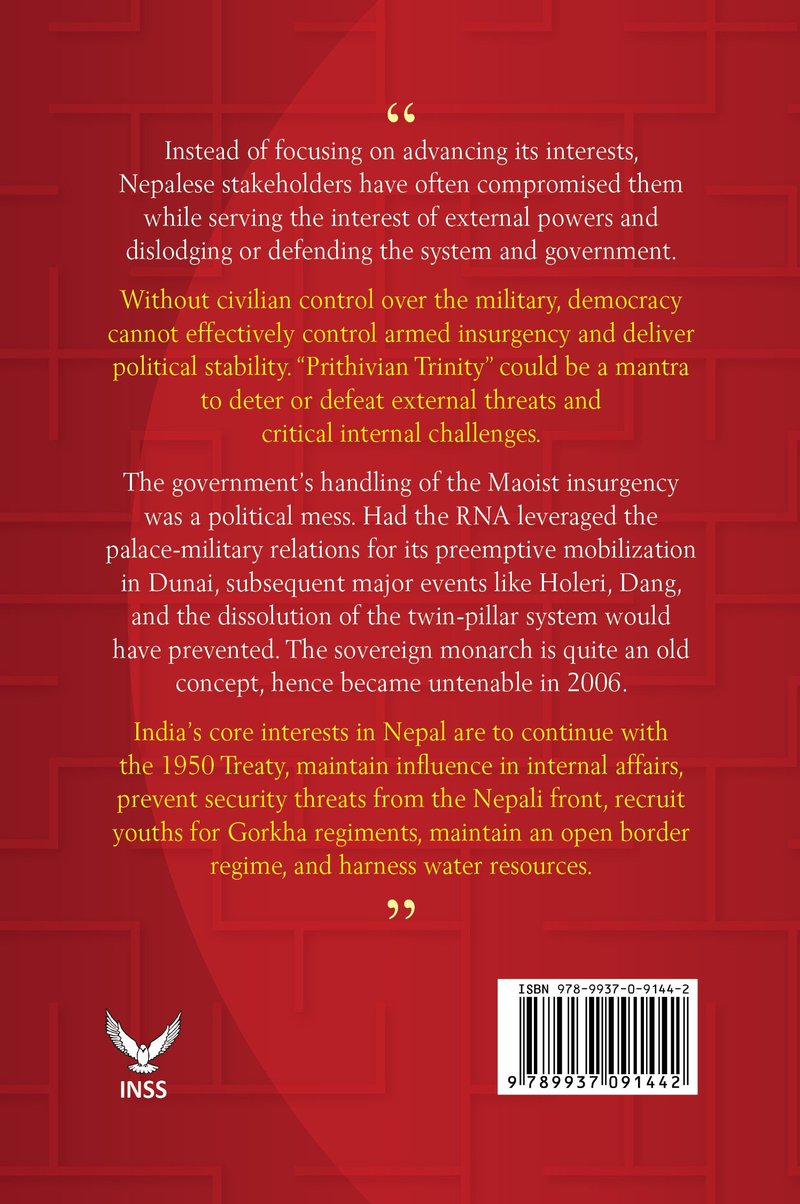 Youths In Nepal Elections: From Social Media To National Platform By Sangya Dhakal 23 hours, 35 minutes ago

An Overture Filled with Confusion By Dr. K. Uprety 3 days, 4 hours ago