Dev Shumsher followed Bir as PM for a brief period of 114 days. A notable action was the relocating the Thapathali Durbar School to the present site on the western side of the Ranipokhari but now allowing also the sons of commoners to be educated there. 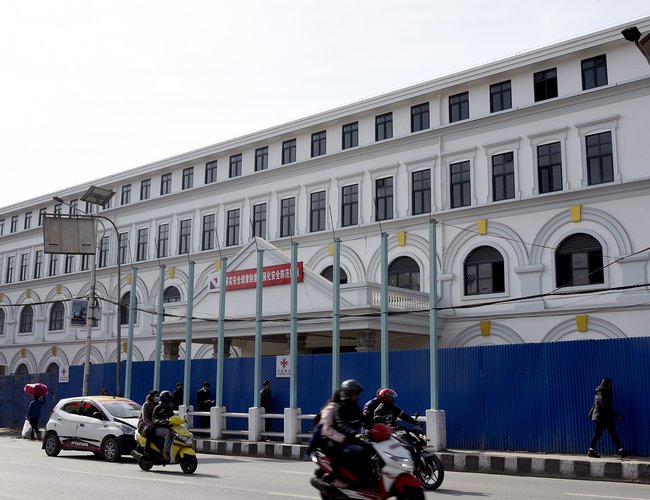 Education to a limited section of society was something that prevailed in the past. As far as modern education is concerned, Jung Bahadur in 1850 following his visit to England and France, decided to introduce the educational system of the Angrezes’ to the sons of elite Nepalis by establishing a school with an Englishman as head at Thapathali Durbar. Subsequently a brother of his, Dhir Shumsher constructed the Teen Dhara Pathshala and a Pakshala - school and hostel for Sanskrit students, plus a lodge for travellers. Bir Shumsher too consolidated this community deed started by his father.

Dev Shumsher followed Bir as PM for a brief period of 114 days. A notable action was the relocating the Thapathali Durbar School to the present site on the western side of the Ranipokhari but now allowing also the sons of commoners to be educated there. Dev Shumsher also started a number of Pathshalas in various sections of the town and in other parts of the country but these gradually closed down because of lack of support.

On becoming PM, Chandra Shumsher felt it as an obligation to start the Tri-Chandra College at the Eastern side of the Ranipokhari. He is said to have remarked at the inauguration of the same that by doing so he was literally axing his own legs with a bancharo! Chandra words were prophetic for it was the furtherance of knowledge that led to political consciousness of the people. Perhaps it was because of this impending spread of knowledge that PM Bhim Shumsher; Chandra successor did not allow the collection of Rs. 100/- from individuals for starting a library. This action came to be known as the ‘Library Parba’.

Time moved on. Initially Nepali students went to Varanasi, Mahotari, Patna and Calcutta for studying and as a result became enlightened. Tri-Chandra College expanded, Sciences Section was started and the Saraswati Sadan was built across the road. The Pathshala was adjoining it. In later years various other schools e.g. Juddhodaya, Padmodaya were started in the capital.

To put it bluntly, a hub for education had been established in the heart of Kathmandu. As many of the teachers were from India some houses were constructed for them at Jamal and also at adjoining Bagh Bazaar. This education hub in the centre of the city also became a site of political consciousness because of its central location. A variety of thoughts flourished and this hub became the starting point of many political activities viz. Chhatish Saal, Chhayalish Saal and at times of Andolan I & II.

To recap, it is true that after 1950 number of educational institutions have been established by leaps and bounds in Nepal. A number of universities have been set up and some are in the pipeline to. Of course the Covid-19 has had a drastic effect on the education of children – both minors and teenagers. New techniques such as online teaching / education is the trend

However the fact is that the learning by books – the written or the printed word is still a major source of knowledge. Young persons are becoming familiar with modern trends such as tablets and androids at the finger tips. This may be so in the capital but is scarce in a developing country such as ours and a handicap. Regular source of electric power, connectivity and universal internet facility all over the country is currently a dream in Nepal. What is required in this modern 21st Century is to start educational hubs in each of the seven pradeshes of Nepal.

About thirty years ago the Health Learning Material Project at the Institute of Medicine published a Nepali translation of the world renowned book ‘Where there is no Doctor’ and which became a bestseller. With a tongue in my cheek I have to confess that we also translated and printed some 5,000 copies of Hesperian Foundation’s, ‘Helping Disabled Children’ as the objective of the Panchayat Days was to have a library in each of the over 4,000 Wodas / wards scattered in the land. In reality this claim was not strictly true.

Besides libraries associated with universities and teaching institution, there are the Kaiser and Dilli Raman Kalyani Memorial Library in Kathmandu. Such generous endowments are however relatively small. There was at one time an ongoing attempt to collect donations of books for setting up libraries located in the Ramilo Mela compound at Kathmandu. Some Nepalis have also donated and started small libraries in their communities but these are relatively limited.

A library has a special place in learning. The history in Nepal as per a recent article by Bhola Kumar Shrestha in a Nepali daily recently is very interesting. PM Tanka Prasad in 2013 BS had started a National Library at Singha Durbar. Four years later after the introduction of Panchayat System the library was shifted to some rooms at Harihar Bhavan in Lalitpur. Following Andolan I in 1990/91 when Yog Prasad was Education Minister, the Jamal land, where the expatriate Indian teachers were formerly lodged, was promised for setting up of the library. This was and is an ideal central location for setting up a Central Library at Kathmandu. However, for some unknown reason, one day before the start of the work for the construction of the library project, the ‘Go ahead’ order was stalled. It seems that there are other contenders for this ideally situated central site. What was an ideal project for the development of knowledge of the Nepali populace has been abruptly stopped. To put it bluntly, ‘Someone has put a spanner in the works!’ Is this an intentional move to axe and reduce the numbers of Nepalis seeking knowledge?

What has depressed me as I go around this educational hub of Kathmandu along the Ranipokhari is the deplorable state of the façade of the main and other buildings of Tri-Chandra College. One even hears that the famous Saraswati Sadan, a relatively recent building is slated for demolition. Whose interest is this in? Many of TCC alumni are certainly in the corridors of power and must do something as sections of the educational hub are gradually done away with. Does not our country have enough funds to do this? Do we have to wait for another generous benefactor to rebuild TCC and the projected National Library in record time, as was done for the Durbar High School?

Conferment Of The Order of Japan’ Decoration As Very Special To Me By Himalaya Shumsher Rana 2 days, 6 hours ago

Long History Of People-To-People Exchange Between Japan And Nepal. By Yutaka Kikuta 2 days, 9 hours ago