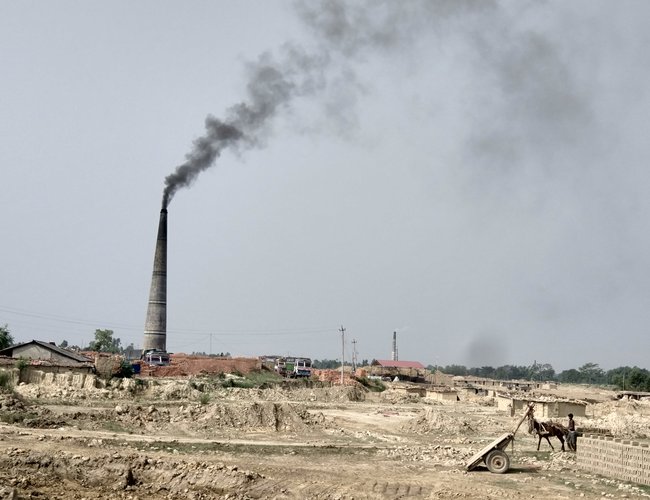 Ramesh Pandit, 52, of Changu Narayan Municipality-9 in Bhaktapur lives some 500 meters away from Swet Bhairav Brick Industry. The pollution caused by the brick kiln about a decade ago is still fresh in his memory. The smoke emitted by the brick kiln polluted the entire environment in the village, causing toxic air and black shoots on the leaves of green plants. It was difficult for children and elderly persons to breathe due to suffocation. He joined his neighbors in protest to shut down the brick kiln.

Although their repeated protests to shut down the brick kiln failed, Pandit no longer has any complaint against it. With the owner of the brick kiln introducing zig-zag technology, the environmental problems that Pandit and his fellow villagers were forced to undergo are now the things of the past. This new technology introduced in the aftermath of the mega-earthquake that hit Nepal in April 2015 emits little smoke in the atmosphere as bricks are arranged in such a way that hot air is allowed to travel in a zigzag path making the entire operation more efficient and environment-friendly.

The problem of air pollution and its associated health risk Pandit and his fellow villagers faced is not a typical problem of Bhaktapur alone. This has become a key problem in both developed and developing countries that have adversely affected human health and polluted the environment. And Nepal is no exception to this. Nepal's capital city, Kathmandu is ranked as one of the most polluted cities in Asia.

The latest report of the World Health Organization (WHO) stated the annual average air pollution concentration in Nepal is five times above the WHO air quality standards. Such a high concentration of pollutants poses a serious health risk for hundreds of thousands of Nepalese. In addition to the brick kilns, vehicle emissions, waste burning, dust and dirt from industries are considered major contributors to air pollution.

Although the air quality recorded in pollution meters has witnessed a significant improvement in recent months due to the lockdown measures enforced by the government to contain further spread of COVID-19, this is still not as good as the standards recommended by the WHO.

Prior to the lockdown enforced by the government, the amount of particulate matter (PM) 2.5 in the air of Kathmandu Valley was found to be 49 micrograms per cubic meter which should be 10 micrograms per cubic meter conferring to the set indicators. The PM 2.5 can easily reach the lungs through our trachea and exaggerate the various health problems.

A research on the impacts of brick kilns on the environment conducted a few years ago found that the emission from brick kilns in Nepal is one of the major contributors of air pollution that comprises of fine dust particles like hydrocarbons, sulfur dioxide (Sox), nitrogen oxide (Nox), fluoride compounds, carbon monoxide (CO) and a small number of carcinogenic dioxins. The report on the overview of brick kilns in South Asia also stated that one of the main emitters of PM 2.5 in Kathmandu Valley is the Brick kilns, which alone are responsible for around 91% of total Particulate Matter (PM) emissions in some South Asian countries.

As compared to the ZigZag technology, the traditional Bull Trench models of brick kilns are inefficient, consume more energy and produce more pollutants. Owners of some brick kilns say the zig-zag technology is suitable for the entrepreneurs of Nepal as the use of this technology in the brick production helps to reduce a considerable amount of air pollutants from brick kilns. A number of studies have proved that converting kilns from straight-line to zigzag design play a significant role in reducing emissions and will endorse cleaner and more efficient brick-making technology.

However, some off kilns, due to limited knowledge and consideration of the environmental aspects also create environmental problems that must be addressed on time.
The Department of Environment (DoE) in coordination with the local government has jurisdiction to monitor and take necessary action on pollution all over Nepal. If there is any complaint of pollution due to brick kilns, the DoE immediately monitors, rectifies and recommends for necessary action," stated Shankar Poudel, spokesperson of DoE. “Entrepreneurs are urged to move for best technology aiming to minimize pollution. The zigzag draught technology and other appropriate technology is gradually expanding from the global arena to Nepal,” he added.

As mentioned in the journal article “Straight-Line and Zigzag Brick Kilns in Nepal”, approximately 1.2% of global anthropogenic carbon dioxide (CO2) emissions are contributed to by burning coal to fire the bricks. The emissions from the brick kilns are directly proportionate with technology and fuel.

The kilns improve activities carried out with the financial support of GIZ and the technical assistance of ICIMOD in Nepal. As before, black smoke does not come out from the chimney as entrepreneurs follow the chimney’s standard set by the government.

FNBI General Secretary ShyamMaharjan said that about 3 billion bricks are produced annually which is in increasing ratio after the devastating earthquake. Additional investment for newer technology is the recent challenge as a technology that demands millions of rupees are not easy for every entrepreneur at this hour of crisis.

“Although many people have said that air is polluted by brick kilns but the reality is false. It would be unfair to evaluate all kilns in such a way. The government needs to pay attention not only to emphasize the use of modern technology but also to think of the market and other policy issues, loan management and more. These local governments are closing the brick industry at the whim of someone,” he said.

BidyaPradhan, Regional Program Manager-Atmosphere at ICIMOD said remarkable progress has been made to make the environment-friendly brick kilns by developing user-friendly technology. She said that all the entrepreneurs have been requested to connect new ZigZag technology with technical assistance from ICIMOD and other development agencies. 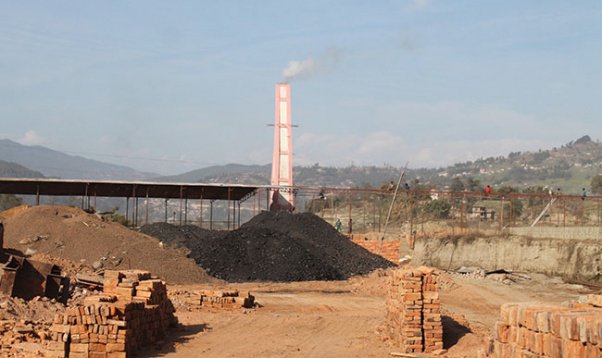 Entrepreneurs are excited to introduce the new technology which reduces the consumption of coal by about 20 to 30 percent, produces high-quality bricks and is cost-effective as compared to the traditional chimneys. Even gas firing replaced the burning of tons of wood, helping to save trees and control carbon dioxide gas emissions.

While stating that the ratio of pollutants in the smoke coming out of the brick kiln has seen a steady decrease in the past five years, Pradhan said the ICIMOD has contributed in developing training manuals, organize exposure visits to entrepreneurs and government officials, share technical knowledge carry out research on technological innovation to contribute in the brick industries. ICIMOD initiated a collaboration with the Council for Technical Education and Vocational Training (CTEVT) for developing vocational education to ensure the availability of skilled human resources in this sector.

Suyesh Prajapati, program director MinErgy Nepal, believes that the demand for ZigZag technology has increased in recent years. Although the standard guidelines for brick kiln operations issued by the government in 2018 are effective as compared to other South Asian countries their implementation has not been as expected. "The government should pay special attention to conduct monitoring to ensure its effective implementation," he said.

It is equally necessary to analyze the social and environmental prospects too. Prajapati said the indicators and figures of the criteria implemented by the government should be different according to the geography, region and population density. "Special provisions must be implemented in Kathmandu, Lumbini, Chitwan and other cities with high population density and high environmental risk," he further said.

Vijaya Singh, Assistant Resident Representative of UNDP Nepal highlighted that though improvements in brick kiln technology are important to reduce air pollution in Kathmandu Valley but is not sufficient as many other factors like vehicular emission, open waste burning and unplanned construction contribute to it. It requires promoting clean transport and green infrastructure such that every citizen invariably enjoys a clean and healthy environment, to which policy, finance, technology and governance should support equally.

SanotAdhikari, the environmental activist stated that the government and stakeholders should think of moving into environmentally friendly, compact stabilized earth bricks to ensure air quality. Unfortunately, neither government nor citizens are serious in the matter of air pollution. Entrepreneurs have to think critically while investing in technology and committed to quality air resulting clean environment.

In addition to this the report published in 2019, of the National Human Rights Commission has expressed concern about air pollution aggravated by brick factories operating inside the Kathmandu valley. Around 110 brick kilns of Kathmandu valley significantly contribute to emissions of harmful gases causing serious impacts on the environment and human health. The government needs to ensure that brick kiln adopts the latest technologies aiming to control and prevent the emission of carbon dioxide and black carbon, besides carrying on the periodic monitoring as a complaint filed.

Since the amount of pollution cannot be measured by the color of the smoke coming rather examining through scientific indicators. The sound coordination of the three-tier government, entrepreneurs and government officials is the most for uplifting the existing scenario. A new business venture on access to the loan has been initiated by ICIMOD which develops the business plan and sets the foundation with one of the commercial banks of Nepal.

Experts believe that the government bodies concerned should periodically revise the standard operating procedure to control the fugitive emissions and carry out monitoring of brick kilns on a regular basis. The federation and its member entrepreneurs must perform the self-regulation to minimize pollutants coming from the brick kilns.

Experts also argue that the regular inspection activities shouldn’t be biased by any phenomenon or visible/ invisible power but by the thinking for a better living environment to mankind. Both the governments and private sectors are equally responsible to reduce pollution, improve the quality of air, ensure efficient production and clean energy development as per the commitment made for the same.

Suman Giri, who worked in television and online media for almost eleven years. Is now working as a media consultant (development communication practitioner) in international organizations.

Nepal Was And Will Always Be A Country That We Will Be Proud To Continue Our Cooperation By Hanan Goder-Goldberg 1 day, 17 hours ago

The Opening Of The Airport Is A Milestone In Nepal’s Aviation And Tourism Sectors By Arnaud Cauchois 5 days, 2 hours ago

The Individual Versus Societal By Prof. Dr. Akal Bahadur Singh 1 week, 6 days ago