Looking at the prevailing situation, there should be no hesitation in admitting that Nepal is not at all stable economically, too and people are desperately wanting stability on both fronts (political and economic), which can be ensured by a result-producing good, honest and clean government like the one once led by Lee in Singapore, which is voted back to power endlessly. 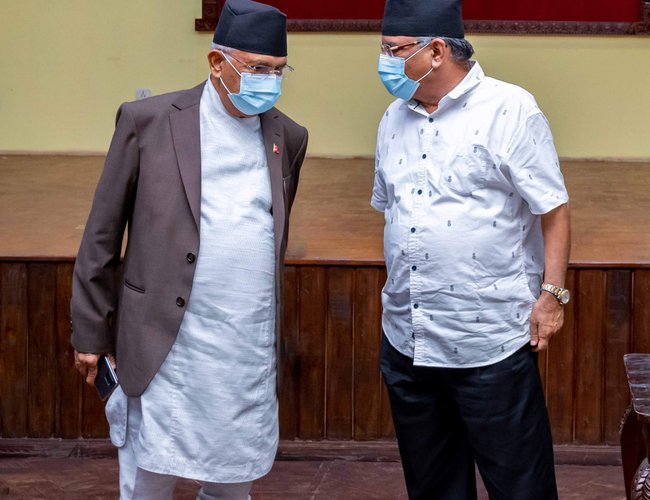 People in Nepal were sick and tired of too frequent change of governments in the past, which they thought was the root cause of the lackluster performance of our economy. They were desperately wanting a stable government at the center to work in the best interest of Nepal and its people. The decision of the two major left parties (UML and Maoist) just before the last general election to fight as one party, with a common manifesto and election symboland merge into one party, was very positively taken by the stability-seeking voters who gave the party a strong majority in the Parliament. The major political party (NC) was relegated to a very weak position, in terms of its strength in the House, and equally weak was the position of other parties. Many prominent leaders of NC suffered electoral debacle at the hands of candidates of the two united left parties. Consequently, therefore, they succeeded in forming a federal government in Kathmandu and provincial governments in six out of seven provinces of Nepal, with the sole exception of Province- 2 where the Madhes- based parties, mainly two, joined hands to form a government. Undoubtedly, people were happy, thinking that a stable government in Kathmandu and in seven provinces of Nepal would allow those at the helm of affairs to concentrate on resolving the major problems faced by the country and its people. Looking at the developments within the new left party, however, people have numerous reasons to be unhappy and feel that lots of cold water have been thrown on the hopes they had pinned on these leaders.

The ruling Nepal Communist Party (NCP) has been experiencing serious intra-party wrangling ever since its formation in May 2018. The party is seemingly divided into two factions led by Prime Minister Oli and the other led by Prachanda (one of the two chairmen of CPN) who is also supported in his never-ending confrontations with Oli by senior leaders Madhav Nepal and Jhal Nath Khanal. It seems that PM Oli is using most of his time managing feud within the party. Decisions made by relevant bodies of the party such as the Standing Committee and commitment of the leaders to abide by them throw some ray of hope,which, however, does not last long because news of noncompliance and reemergence of complications in the party spreads only days after the decisions are made public. There were times when top leaders of the party went to the extent of demanding Oli’s resignation who, however, is tenaciously sticking to his claim\argument that he has to remain number one in both the party and the government because this can only save the nation from getting into serious problems. His occasional decisions\agreement that Prachanda should be the executive chairperson of the party have also remained unimplemented due basically to the continuing rift between them. It is said that the two factions are doing their best to muster support in their respective favour in different bodies of the party such as the standing committee, parliamentary party and the central committee. In addition to these party-related confusions, something or the other, no matter how insignificant, is happening to abundantly confuse the people in the current politically fluid situation. Worth mentioning in this context is the recent visit to Nepal by Mr. Goel, chief of Research and Analysis Wing(RAW), an intelligence wing of the Government of India, which has remained very active in Nepal, dealing with politicians, for long. Mr. Goel’s late-night one- on- one lengthy meeting with PM Oli invited lots of criticism from different quarters. More than the opposition NC leaders, leaders belonging to NCP were more vocal in attacking this act of Oli. Equally controversial, many thought, would be the visit here of General Naravane, Chief of Indian Army, who was conferred the honorary title of Chief General of Nepali Army by President Bhandari on November 5, in keeping with the decades-old tradition of honoring the Chief of Staff of the Army of one country by the army of another country. It may be noted that the Indian General had issued controversial statements related to disputed land area in far west Nepal(Kala Pani, Lipulek and Limpiyadhura), over the ownership of which the two countries are in dispute. Some noise was heard about the visit but did not attract the serious attention of observers unlike what had happened during Goel’s visit. General Naravane did well by correcting his statement before coming here and Nepal Government also did well by not trying to unnecessarily veil his visit, which kept the trip more or less controversy-free. In the context of changing regional and global developments of strategic importance, he may have tactfully taken up other issues with the concerned authorities here but both sides acted tactfully to make the visit relatively less noisy. A point to be noted is that despite Goel’s visit here as a special envoy of Indian Prime Minister, PMOlli’s effort to keep the visit a secret created lots of controversies, sending his party into turmoil. Unfortunately, therefore, even a strong government, in terms of parliamentary strength, is often seen ineffective due to never-ending problems in the party, which has led many to believe that the country is still politically unstable and the root cause of which is the CPN. Indeed, the major opposition party NC cannot be blamed for the current situation because it has many internal issues of its own to resolve prior to its forthcoming general convention and appears in no position to pose a threat to the government. People, therefore, believe that a strong faction within NCP is acting as the opposition party, bringing controversial acts and decisions of the government to the fore. This act is not disliked by people at a time when opposition parties have not been effective in the discharge of their responsibilities and the government has failed to effectively tackle serious problems such as the Corona pandemic. People’s only fear is that the continuing serious dispute within the party may push the nation into a chaotic situation reemergence from which could be very difficult and costly. In fact, people do not care much about who rules the country as long as those at the helm of affairs are meaningfully engaged to ensure the stability and prosperity of the nation. It’s time that we gave a thought to the good works of others done elsewhere.

While talking about the contribution of leaders in pushing their nations towards prosperity, one is often tempted to cite the role that late Lee Kuan Yew played in ensuring over time a very high level of living for the multilingual, multiracial population of Singapore, which in the long past was a small fishing village of less than 200 fishermen. It may also be mentioned that the per capita GDP of Singapore was US$ 400 in 1958 when Lee took office as prime minister, which climbed to more than US$ 12,200 in 1990 when he stepped down as head of the government but continued to backstop the dispensation. Let us not forget that Lee also had to confront serious problems of varying nature right from the beginning, the biggest headache being the economy at a time when unemployment was alarming at 14 percent and the country had ceased to remain the center of the wider area that the British once governed as one unit. Indonesia was confronting Singapore and Malaysia was hell bent on rendering obsolete the tiny state’s role as the entrepot and middleman for the trade of the region. Between 1959 and 1965, Lee’s government had fearful clashes with the communists and then the Malay communalists. With Indonesia confronting Singapore and Malaysia determined to bypass it, Lee even though it would be difficult for his country to survive economically and had thus not ruled out the possibility of remerging with Malaysia. However, from a period of despair that was rampant in the 1960s, the country was taken ahead into an era of unprecedented growth and development, confronting problems that surfaced intermittently. Looks like the economic prosperity achieved there has paved the way for his party to rule Singapore forever. Singapore today looks unshakably stable on both fronts- economic and political. Let us now delve a bit into our case.

Despite the near two-thirds majority enjoyed by the current dispensation, people don’t feel that the nation is politically stable, which could shake the country vehemently. Side by side with the disappointing situation on the political front, the lackluster performance of the economy has also made people very unhappy. As per data made available by Nepal Rastra Bank for the first two months of the current fiscal year (FY), a decline of 22.1 percent in merchandise imports compared to the corresponding period of the last FY, and some improvement in exports have led to an improvement in export\import ratio (from 8.1 to 11.4), the balance of payment (from a surplus of Rs.8.83 billion to RS.67.63 billion) and current account position has also remained relatively better. Some other areas to derive solace from would be a comfortable foreign exchange reserve position (adequate to cover merchandise import of 16.5 months) and a moderate level (4.52 percent) of inflation. Further, remittances have not taken a nosedive, despite what was apprehended in the wake of Corona. These positive signs currently observed should, however, not be misconstrued to paint a rosy picture of the economy at a time when the capital expenditure of the government has remained frustratingly low at Rs.29.60 billion, which is just 8.4 percent of the allotted Rs.352 billion under this head and sluggish growth. It would be unwise, however, not to give the benefit of the doubt to Mr. Poudel, just a few weeks into his job as finance minister, who seems to be worried about these problems and resolves to frame a strategy to fight Corona. He may note that concerned agencies and knowledgeable people all over the world have suggested governments to increase their spending to create employment opportunities and enable people to demand goods and services with income from their newly-created jobs. It may be reiterated that some of the positive signs seen in some areas (foreign exchange reserve, BOP and current account) are basically on account of low internal demand and the economy is almost certain to face stronger headwinds in times to come, if we don’t genuinely try to correct the problems and simply try to veil the reality resorting to hard-to-believe words. It may also be noted that the International Monetary Fund has very recently revealed that the global economy has begun to recover from the depths of the Corona, which could be uneven in nature because the momentum could be a slow one in countries that have failed to fight the virus effectively and some having already seen its resurgence. Looking at the prevailing situation, there should be no hesitation in admitting that Nepal is not at all stable economically, too and people are desperately wanting stability on both fronts (political and economic), which can be ensured by a result-producing good, honest and clean government like the one once led by Lee in Singapore, which is voted back to power endlessly.