China Has Successfully Put Another Probe On The Moon. 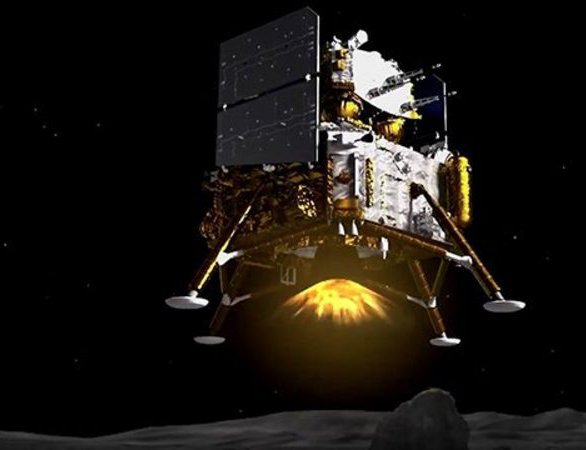 Its robotic Chang'e-5 mission touched down a short while ago with the aim of collecting samples of rock and dust to bring back to Earth.

The venture has targeted Mons Rümker, a high volcanic complex in a nearside region known as Oceanus Procellarum.

The lander is expected to spend the next couple of days examining its surroundings and gathering up surface materials.

It has a number of instruments to facilitate this, including a camera, spectrometer, radar, a scoop and a drill.

The intention is to package about 2kg of "soil", or regolith, to send up to an orbiting vehicle that can then transport the samples to Earth.

It's 44 years since this was last achieved. That was the Soviet Luna 24 mission, which picked up just under 200g.

Unlike the launch of the mission a week ago, the landing was not covered live by Chinese TV channels.

Only after the touchdown was confirmed did they break into their programming to relay the news.

Images taken on the descent were quickly released with the final frame showing one of the probe's legs casting a shadow on to the dusty lunar surface.

"When the samples collected on the Moon are returned to Earth, we hope everyone will benefit from being able to study this precious cargo that could advance the international science community," he tweeted.

The 8.2-tonne Chang'e-5 spacecraft "stack" was launched from the Wenchang spaceport in southern China on 24 November (local time). It arrived above the Moon at the weekend and then set about circularising its orbit before splitting in two.

One half - a service vehicle and return module - stayed in orbit, while a lander-ascender segment was prepared for a touchdown attempt.

Chang'e-5's success follows China's two previous Moon landings - those of Chang'e-3 in 2013 and Chang'e-4 last year. Both of these earlier missions incorporated a static lander and small rover.

A total of just under 400kg of rock and soil were retrieved by American Apollo astronauts and the Soviets' robotic Luna programme - the vast majority of these materials coming back with the crewed missions.

But all these samples were very old - more than three billion years in age. The Mons Rümker materials, on the other hand, promise to be no more than 1.2 or 1.3 billion years old. And this should provide additional insights on the geological history of the Moon.

The samples will also allow scientists to more precisely calibrate the "chronometer" they use to age surfaces on the inner Solar System planets.

This is done by counting craters (the more craters, the older the surface), but it depends on having some definitive dating at a number of locations, and the Apollo and Soviet samples were key to this. Chang'e-5 would offer a further data point.

Reports from China suggest the effort to retrieve surface samples may last no longer than a couple of days. Any retrieved materials will be blasted back into orbit on the ascent portion of the landing mechanism, and then transferred across to the service vehicle and placed in the return module.

The orbiter will shepherd the return module to the Earth's vicinity, jettisoning it to make an atmospheric entry and landing in the Siziwang Banner grasslands of the autonomous region of Inner Mongolia. This is where China's astronauts also return to Earth.

"I think it's extremely impressive what they're trying to do. And what I think is fascinating is you see this very systematic, step by step approach to increasing their exploration capabilities - from the early Chang'e missions to this latest one."

Xi May Be Elevated To 'Helmsman,' Title Used By Mao
May 26, 2022
Rabindra Mishra Resigns From Chairperson Of Bibeksheel Sajha Party
May 25, 2022
Induction Stoves Will Be Encouraged To Replace Cooking Gas: President Bhandari
May 25, 2022
NEA And GGGI Korea Signs Agreement For Green Hydrogen
May 25, 2022
21 People Died In Texas School Shooting
May 25, 2022

Russian Forces Claims Mariupol Steel Plant is Under Their Control By Agencies 5 days, 2 hours ago

Foreign Secretary Paudyal Thanked China For The Preparation Of The Return Of Nepali Students To China By NEW SPOTLIGHT ONLINE May 26, 2022

Weather Forecast: Light To Moderate Rain In Bagmati By NEW SPOTLIGHT ONLINE May 26, 2022

Replacing The LPG By Electricity Is The Priority Of The Government: Minister Karki By NEW SPOTLIGHT ONLINE May 25, 2022

Four Nepali Peacekeeper To Be Honored Posthumously At United Nations Ceremony By NEW SPOTLIGHT ONLINE May 25, 2022