Nepal, as a member of the most disaster-prone South Asian region where over 700 major natural disaster incidences have taken place in the last thirty years, needs to pay more attention to climate change. 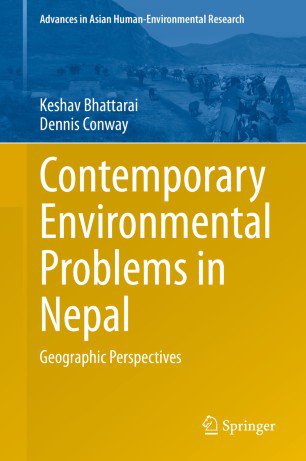 This is a remarkable book about environmental issues and problems of Nepal. Climate change is a matter of great concern to many, andthis book is the first of its kind to bring environmental and climate change issues that cut across geopolitical, technical, legal, demographic, and economic spheres in a holistic way. Even though the primary audience for this book is geographers, its scope is so vast that anyone interested in any important aspect of contemporary Nepal will find the book immensely insightful and useful.And one of the very important attributes of the book is its data-rich content and use of data visualization.

The book is a magnum opus. It has nine chapters. Each chapter is recast in a wider regional and global environmental context with detailed and richly documented information. A very brief summary of each of the chapters of the book is in order.

The first chapter introduces environmental problems faced by Nepal in specific reference to ecopolitical and sociodemographic conditions with focus on water resources, physiography, human adaptation, and broader border and regional context. This chapter thus establishes the foundation for deeper analyses of myriads of other environmental issues and problems in subsequent chapters. The second chapter examines influences on deteriorating environment coming from demographic considerations such as population structure, mortality and fertility rates, caste and ethnicity, religion and language, migration and brain drain. It argues that environmental degradation could dramatically change the existing fabric of the Nepalese society currently characterized by harmonious co-existence of multiethnic, multireligious and multilingual groups into a society rife with conflicts over matters related to resource sharing and ecosystem services. Chapter three addresses issues pertaining to environmental sustainability and human well-being.The authors take on environmental degradation problems due to glacier lake outburst floods, earthquakes, landslides, and deforestation, among others, as major threats for sustainability. They warn of possibility of recurring disasters if proper actions for environmental protection are not taken immediately. Another major factor accounting for many of the environmental problems in Nepal is urbanization. Chapter four delineates facets of rapid urbanization taking place in Nepal.The authors demonstrate that a lack of professional approach to urban planning has produced many negative effects on environment and argue that it is important to bring both science and conscience to create environment friendly urban growth.One of the major problems facing the agricultural sector in Nepal is out-migration of farmers leaving the land barren in many instances. In addition, global climate change has severely affected agricultural practices. These developments have adversely influenced poverty alleviation policies and practices. These are the subject matters discussed in Chapter five. The theme of chapter six is the energy sector. While Nepal is one of the richest countries in the world in terms of hydropower potential, sadly only three percent of this potential has been utilized so far. The authors convincingly arguethat Nepal should focus on developing and deploying hydropower for prosperity.Since hydropower is clean energy, its development and deployment can bring many benefits to the country and the people. Issues and problems related to developmental infrastructures such as roads, communication network, population distribution, capacity building, incomes distribution, and quality of life are examined in chapter seven. The authors show a nexus between income inequality and disparity and environmental sustainability and argue that incomes equality is one of the solutions to environmental problems.They call for immediate attention of the Government of Nepal towards achieving this goal. Chapter eight examines the effect of deforestation on environmental degradation, and on greenhouse gas emission, and offers an empirical assessment of geospatial aspects of human-environment interaction and resulting consequences for the habitat at a macro level. Chapter nine is an elaborate summary of the preceding chapters together with overall conclusion.Policy implications of the analysis presented in the book are further discussed in this chapter.

Nepal, as a member of the most disaster-prone South Asian region where over 700 major natural disaster incidences have taken place in the last thirty years, needs to pay more attention to climate change. Failure to take actions on climate change issues might result in major disasters for the country. For example, the retreat of the Himalayan glaciers has already begun to negatively affect rainfall patterns, groundwater recharge system, and water supplies, among others. These changes have huge implications for the livelihood of subsistence farmers and many other low- income groups in the country.The authors have convincingly argued that even the Millennium Development Goals (MDGs) of the United Nations such as eradicating poverty and combating communicable diseases are unattainable without embracing environmental agenda.However, it is not to say that the government of Nepal has done nothing to ameliorate atmospheric carbon emissions. As the authors have documented, there are over 2,300 community groups involved in managing 2.25 hectares of community forests. In addition, the government has instituted a National Adaptation Plan of Action and a Local Adaptation Program of Action. These corrective measures taken by the government are commendable. But they are not sufficient to address the huge climate change problems that we are facing now and that we may face in future. Hence the policy prescription that more proactive climate action plans are urgently needed is a sound one.

Since climate change is interregional and global, neighboring country policies will have repercussions for domestic policies. In view of this transregional nature of the phenomenon, how to align domestically designed climate policies of each individual countries at a regional level is an important issue. The authors could have shed more light on this aspect of the transborder climate problem. Nonetheless, the goal of bringing in all major environment related matters into one analytical platform has been achieved. And the amount of thinking, research, and reflection appliedby the authors to bring this goal into fruition appears to be a considerable feat. In my view, this book will prove to be the foundational work in the field of environmental studies in Nepal.

Overall, Contemporary Environmental Problems in Nepal: Geographic Perspective is a very engaging and informative book. It is packed with information and insights. It includes sources from plurality of disciplines and fields. The main objective of the book as set out in the introductory chapter was to render it as “a reference for bio-economic modeling to assess the land productivity through the analysis of location-specific issues’ (p. 31). The authors have becomesuccessful in achieving this objective. The book thus offers a solid foundation for understanding and explaining why environmental problems are so important in Nepal. In doing so, it provides motivation and inspiration to scholars for doing further research. The book should belong to the personal library of everyone interested in environmental problems in general and development issues in the context of climate change in Nepal in particular.

Nepal Is Bearing The Disproportionate Burden Of Climate Change By BHARAT RAJ PAUDYAL 4 days, 4 hours ago

Refugees In Nepal: Recognition And Inclusion By Deepesh Das Shrestha 6 days, 23 hours ago