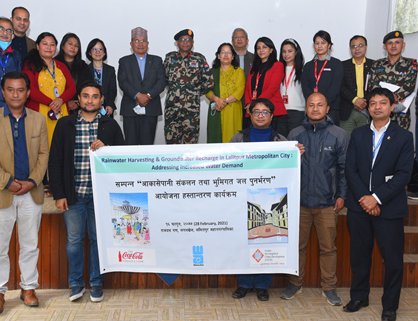 With the support from WaterAid Nepal and The Coca Cola Foundation the Centre for Integrated Urban Development has handed over Rainwater Harvesting and Groundwater Recharge project to Rajdal Army Barrack, Lagankhel.

The collaborative project which completed in two months is handed over to the Rajdal Army in presence of Mayor of Lalitpur Metropoitan City Chiribabu Maharjan.

The project has been executed with an objective of recharging groundwater in Lagankhel and its peripheral areas and to demonstrate this technology among wider communities, said the partners in a statement on Tuesday.

About 51 recharge wells along with 51 filter chambers were constructed inside the premises of the barrack. The expected volume of potential water recharge, through these wells is 51 million liters a year.

Additionally, to remove silt and sand from the surface runoffs, three desilting basins were also constructed in the area where runoff water is likely to carry dirt.

One rain garden has also been constructed to demonstrate the efficacy of such initiatives towards groundwater recharge.

Alongside, motivational and awareness programs on groundwater recharge were conducted in the wider communities involving local authorities, civil society organizations and academic institutes, read the statement.

The groundwater table can be maintained by artificial recharge process through construction of recharge wells which are simple and low-cost structures that can be promoted at strategic locations by concerned institutes or individual households.