As a result of a flawed economic model, every year millions of our youths are going to Gulf countries and Malaysia in search of jobs 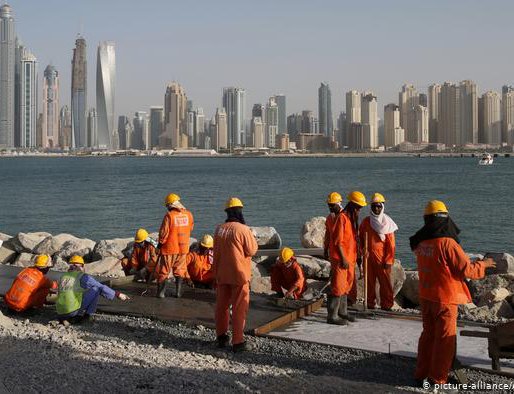 Nepal’s economic development and growth sectors have not been well prioritized and seem to be confusing, and in practice rather than in principle, it defines the construction of infrastructures, i.e., construction of roads, bridges, and buildings by awarding contracts to private contractors as a major facet of development. And there are negligible space and the least priority for the development of real sectors of the economy - agriculture, manufacturing, and service sectors, which are the engine of mass employment and economic growth.

By the way, both government and the private sectors including our two giant neighbors, India and China also have priorities to invest in certain selected sectors of constructions and service sector in our country, however, their investment in real sectors of the economy especially in manufacturing seems to be in low priority.

As a result of the flawed economic model, every year millions of our youths are going to Gulf countries and Malaysia in search of jobs. We are completely dependent on the import of almost all goods including foodstuffs as we are in a stage of lowest production and poverty and unemployment have been major challenges to the economy and the country remained at the bottom-most of the world economy.

Nepal’s inability to produce the mass level of goods for import substitution and export promotion has been one of the causes of our backwardness. Our import-export ratio 90:10 represents unhealthy sign in economy, for every export value of Rs 10, we import equivalent Rs. 90 from outside. As result of constant decline in manufacturing sector - from previous highest 12% to currently 6% to GDP, trade balances have always been extreme negative.

Only changes in political system could not bring stability in our entire systems and its reflections are visible in system of governance. The government and bureaucratic systems are less investment friendly, which are real hindrances for inflow of investments in productive sectors.

Our import, remittances and primary production-based economy cannot sustain for longer period and it is impossible to get expected result to compete with regional economy.

How manufacturing sector transforms a country and its economy, our neighbor China is an excellent example. In1978,it had a GDP of only $200 billion, about 4% of worlds GDP but by the end of 2020 that has risen to US$ 14.6 trillion and accounts for 17.5% of all economic activities in the world. China's rapid rise, from backward agrarian society to industrial powerhouse in just four decades became possible as result of steep growth in manufacturing sector.

Moreover, in South Asia region, Bangladesh is in track to be new Asian Tiger by exporting garments as major commodity both in volume and in competitive prices. Its economy has been one of the top performers in Asia over the past decade. It transmuted from garment exports accounts for more than 80% of its exports. These two countries are only instances, however there are also other numerous countries, who exceptionally transformed their economy in short span of time.

During eighties, Nepal and Bangladesh were in equal economic parameters, however Nepal is still in the bottom of world economy and struggling for its economic stability.

The reason behind success of these countries is a lot to like about the market's fundamentals- political and economic stability, focus on the grassroots, bottom-up reforms; promote rural industries despite their primitive technologies; provide enormous government support for infrastructure buildup; follow a dual-track system of government/private ownership instead of wholesale privatization; and move up the industrial ladder, from light to heavy industries, from labor- to capital-intensive production, from manufacturing to financial capitalism, and from a high-saving state to a consumeristic welfare state.

Nepal has two major options for transformations of its economy, either through exporting electricity to India or through export of manufacturing items worldwide.

For the first option, India, the only potential buyer of Nepal’s surplus electricity, has very instable policy towards buying electricity from its neighbors.It has high demand for electricity, however when and how it would take U-turn in policy seem to be risky for investors to export electricity there. As Nepal has very bitter experiences, India imposed quantitative restriction in numerous Nepali manufacturing products against trade treaty between two countries.

The next option, development of manufacturing industries and its export seems to be comparatively more advantageous and potential sector. Nepal can export its manufacturing items not only to its neighbors but also to many other countries. The only thing Nepal must do is that this sector needs to be recognized number one economic agenda by the government through national laws, recognizing private sector and the external investors as key players of the economy.

Previously, the country had made good progress in trading of exportable items. During eighties, Nepal experienced some optimistic moments in manufacturing sector; Nepalese woolen carpet shops across the streets of Frankfurt and other European cities were subject of major attraction. Nepalese garment export to USA was contending with other major garment exporters of the world. And export of Nepalese products to India including edible oil (Vanaspati ghee), acrylic yarn, copper products, zinc oxide etc. had also given good impetus by that time. As per media reports, Queen Elizabeth also used to wear Nepalese Pashmina shawl by that time.

During 2000, share of manufacturing sector to GDP was around 12% and industries were supporting satisfactorily to export promotion and import substitutions.

Nepalese export trade experienced external shocks after United States scrapped Multi Fabric Agreement in 2003 which squeezed to almost zero to Nepal export there and in 2009 India imposed quota restrictions on major Nepalese exportable products. These were key elements for the crumble of Nepalese manufacturing. Moreover, the internal shocks responsible for deterioration of industries were Maoist insurgency, political instability, power crisis and labor problems.

Currently, the manufacturing sector is in its lowest level of performances.

Bureaucratic and policy hurdles and hindrances are blocking the investments in this sector. The investors do not feel comfortable to invest as result of numerous barriers and hurdles.

The barriers, such as laws limiting the operation of foreign banks, limitations on the repatriation of profits, limited currency exchange facilities, and the government’s monopoly over certain sectors of the economy, such as electricity transmission and petroleum distribution, undermine foreign investment in Nepal. Foreign investors also are not allowed to invest in the Nepal Stock Exchange.

In the words of some foreign officials, corruption in Nepal is “endemic, institutionalized, and driven from the top.”

There are widespread concerns that government incentives, bureaucratic procedures, and infrastructure are in very basic stage to support export industries in Nepal.

The other factors affecting negatively to Nepalese manufacturing sector are - Indian market for Nepali product is highly fluctuated; it changes its policy course violating trade transit treaty with Nepal and imposition of different tariff and non-tariff barriers, quota restrictions if Nepalese export started to expand in Indian market.

During nineties, privatization of state-owned industries was not correct move to strengthen the manufacturing sector. Public sector industries, especially Chinese build industries were sold without proper evaluation only to acquire valuable lands and properties of the industries by the individuals and failed to run these industries even in the earlier conditions. This happened even though Nepali industries cannot compete with the goods produced in India and China, both of which have economies of large scale.

Due to open border and easy accessibility of Indian currency, almost everything from India enters Nepal through illegal channel without paying import duty except heavy and bulk items like cement, iron, and raw materials. Nepal is self-sufficient in only such bulk commodities, which cannot be smuggled in through open Indian borders.

There have been some efforts by the government to uplift economy by supporting manufacturing sector, however they are time consuming, not properly implemented and still long way to go. Governments in Nepal, seem to be interested to laid foundation stones of industrial areas and Special Economic Zones whether the private sectors are interested to establish or not interested to establish industries there. Recently the prime minister and the ministers laid foundation stones of many industrial areas and economic zones as continuation of this process.

And, since a long time, Nepal is developing the country’s first two, export-oriented large Special Economic Zones (SEZ) in Simara for garment and in Bhairahwa for manufacturing items, However, only a limited numbers of private industrialist are interested to establish industries there and the majority are reluctant to invest citing differences with government policies.

Nepal certainly lacks resources, but in which way it is being publicized, are not completely correct. For example, its bank deposits have surpassed GDP and external investors are also interested to investment here.

The government has not very clear policy in leasing public lands of remote areas for private sector industries; however, it easily leases land to private sector in urban areas to build buildings and malls.

Due to lack of manufacturing industries and unreliability in the internal market, people in Nepal seem to be more interested to investment in real estates, gold, and deposit money in bank instead of investment in productive sectors.

To bring rapid and meaningful transformation of the economy, the government should completely change its outlook and strategies to support manufacturing sector as main priority.

The government is in process fast track to update industrial and labor laws, foreign currency regulations and other related laws to support industrial development

For export trade, we must also revitalize our dead garment, and carpet manufacturing sectors, by inviting domestic and international partners to investment in medium and large industries for export. Moreover, in similar way, investments are also needed in processing of primary products, handicrafts, gold and diamond ornaments industries through organized companies and export processing zones of Nepal, which could value add tremendously to these commodities and increase both quality and volume of exportable products.

United States of America is the biggest ready-made garment importer of the world and Nepal must revolutionize its garment manufacturing bases to fully utilize the duty-free facilities provided by the USA to Nepal till December 2025.

After getting duty free access and preferential treatments in trade to export, we must develop its competitive capacity to export goods without these facilities, too.

Currently manufacturing sector is small and is not dynamic, cannot be expected to play a strong role in mitigate economy-wise imbalances. And without fast development in this sector, rapid transformation in the economy is almost impossible.

The author is former Under-Secretary at Ministry of Finance and was associated with United Nations Development Program, Africa.