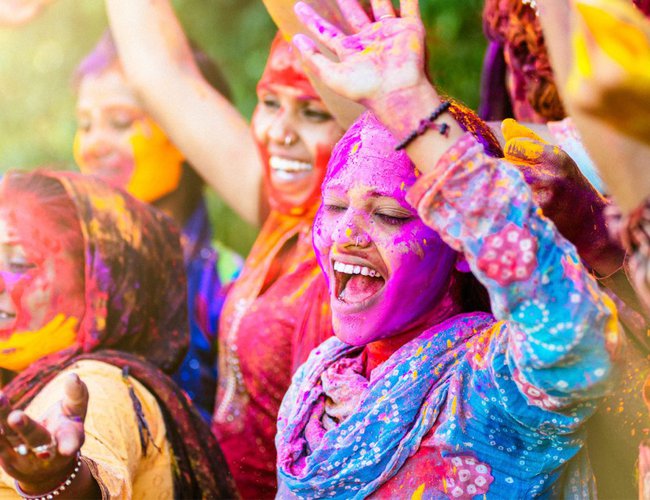 Holi or Fagu Purnima, the festival of colours, is being celebrated on Sunday and Monday with fervor across the country. Much of the hilly region of the country including Kathmandu Valley celebrate the Holi today and people in Terai celebrate on Monday by smearing colours to each other and exchanging best wishes.

Nepalis and Indian around the world would vouch for the fact that while there are many festivals that they celebrate with fervour, it is the festival of colours or Holi that they most look forward to every year, for it is a celebration like no other, and one that brings people of different communities together to eat, dance, throw colours and make merry.

This year, Holi will begin on March 28, which is a Sunday, and end on Monday, March 29.

Besides the riot of colours, the day also celebrates the season of spring and the feeling of love. It is a day when people forgive mistakes of the past and start anew. On the pious occasion, it is said that love blossoms when people smear colours on each other and mend broken relationships.

It begins on the night of Holika Dahan — a day prior to Holi — wherein the evil king Hiranyakashipu’s sister Holika was charred to death when she had sat with the young Prahlad on a pyre. The latter, devoted to Lord Vishnu, was saved from the fire by His mercy, but Holika had been engulfed. Later, the reign of Hiranyakashipu, too, was brought to an end, when he was killed at the claws of Lord Narasimha, an avatar of Lord Vishnu.

As such, Holi — just like many other Hindu festivals — celebrates the victory of good over evil.

Another legend associated with the festival is that of Lord Krishna — another avatar of Lord Vishnu — and his consort Radha. In the Braj region of India — where Krishna is believed to have grown up — the festival is celebrated until Rang Panchmi, in commemoration of the divine love between Radha and Krishna. While Krishna, a dark-skinned lad once playfully complained to his mother about his complexion, she told him that Radha would like him as he is, and that he can even ask her to paint his face and hers in any colour of her choice. While Radha agreed to this, the colour that was on her face, reflected on his and vice-versa. Thus, this was the occasion wherein RadhaKrishna became one, and came to be understood as a part of one another.

Amid the pandemic, you need to exercise caution while celebrating. Also, make sure you only smear colours and water on people who consent to their participation. The day is about happiness, make sure everyone gets to enjoy it.

The festival, whose celebration begins with a Holika Dahan, or the death of demon Holika on its eve, marks victory of justice over injustice. People enjoy smearing red vermilion powder to one another on the occasion.

The festival, celebrated until the full moon day, started on Sunday after erecting a pole at Basantapur.