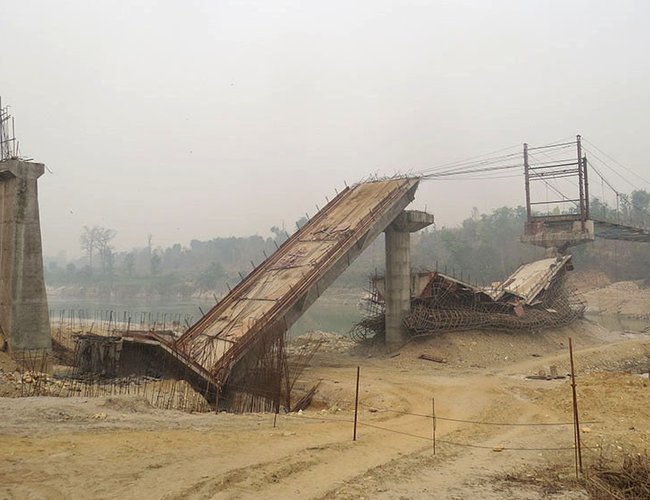 The lexicology of development hides more than it reveals. In England during the Industrial Revolution, as rural economy underwent wrenching upheavals and pauperization of the population, the process was justified as 'improvement' that one could really not be against per se, followed by 'progress' before we came to today's 'development'. The same is true of 'infrastructure': the term was unknown just some fifty years ago when such development activities used to be called 'public works'. In an insightful article, Alex Marshall describes how it was the French military planners who used this word in the late 1800s. It moved into the English language when it was picked up by NATO in the 1960s; and foreign aid agencies subsequently transported that to the rest of the "under-developed" world thereafter.

In Nepal, a word had to be quickly found to explain donor requirements through infrastructure development, and lo! it was bikas ko purbadhar or "pre-existing foundation for development".Just as the current word for development, i.e., 'bikas' did not exist a century ago, the word then being 'unnati' which Oli-speak is replacing by 'sambriddhi' (or 'prosperity'), purbadhar is a recent creation. The military ethos behind the word 'infrastructure' resonates in current debates in Nepal. Should the Nepal Army be building roads or state-fed to idleness waiting for an improbable war? Should Nepal accept the strategic baggage of the US'sMCC with its Indo-Pacific Strategy? What about the Chinese BRI and the fear of a debt trap?

Given that these are the only two major global (foreign) infrastructure initiatives around, what underlies their push? US's IPS is a continuation of the market hegemony of maritime powers whereas the BRI is an alternative Eurasian landmass development initiative. How should land-locked Nepal approach these public works ventures? These and many such concerns welled up my mind at a recent two-day residential workshop organized at Gokarna by Policy Entrepreneurs Inc with The Asia Foundation.

Great rulers have always invested significant effort and resources in developing public works that have survived till today: the Romans did it with their roads and aqueducts and our own Lichhavis and Mallas did it too with pokharis and dhungey dharos. It was with the rise of capitalism and its expansion into what subsequently became colonized lands that public works such as railways, ports and even educational establishments were executed in the Global South to facilitate market penetration and resource exploitation by the colonial powers. It was justified as 'modernization', and post-World War-II with the Bretton Woods arrangements and foreign aid as a driving industry, as development.

Nepal's encounter with infrastructure began with modernization mimesis under Chandra Sumshere: the Sundarijal hydroelectric plant in 1911 and, using its electricity, the Swayambhunath Ropeway from Halchowk to Lainchaur to ferry construction material in 1924. It was followed in 1927 by a 22 km Tri Chandra Nepal Tara Ropeway from Dhorsing near Bhimphedi to Matatirtha in Kathmandu. Around this time, a narrow-gauge railway line was extended from Raxaul to Kathmandu. These promising technologies that today we consider mountain- and climate-friendly were soon overshadowed by fossil-fuel burning trucks plying on rapidly expanding road network starting with the Tribhuban and Hetauda-Bharatpur highways in the late 1950s. This equating of infrastructure development with roads, to the exclusion of better alternative technologies, continues unabated today: indeed, the UML's 2017 local election manifestos promised rural voters "roads within three minutes walking distance from every home!"

Post-World War-II and post-Rana rule, Nepal's infrastructure development was determined by foreign aid which saw three phases. Till the 1970s and the major Oil Crisis, it was dominated by the search for goodwill among donors, also with an element of country competition, from which, however, the Soviets and the Chinese eventually withdrew leaving the field to Western-led agencies and India. Even among the latter, Western bilateral agencies moved away from hard infrastructure to soft development issues, funneling their share of the hard stuff to the World Bank and Asian Development Bank.

By the mid-1980s, a second phase set in with an underlying sense of "donor fatigue" best expressed through the Structural Adjustment Program. It has rightly been called "fatalism in development", meant to protect the lender's loans and to marginalize the receiving state's involvement in favour of market players. By the time the Berlin Wall came down and the Soviet Union collapsed, the dominant Western players saw even less reason to pamper countries of the Global South: their Washington Consensus decreed that henceforth the End of History was nigh and neo-liberal markets were to be the vehicles of salvation.

The third phase is on-going: it has become obvious that markets failed to deliver, indeed markets (as the 2008 financial crisis showed) were themselves part of the problem; and foreign aid as an institution is on the decline and maybe even on the road to irrelevance. Moreover, infrastructure is not so much a private good amenable to market methods: it is mostly a public good requiring larger state intervention in its management. Given that good infrastructure lasts generations, it also requires society'sdeepermoral values promoting behavioural changes. That entails its citizens to treat infrastructure as a "common-pool good", not something they own but one which they are custodians of for future generations. What new institutions and players will emerge with what new driving ideologies and mechanisms is currently all up in the air.

Nepal's experience with foreign-aided infrastructure development has been mixed. When the Nepali state was in the driver's seat, as during much of the early Panchayat, the dominance of the public goods aspect of its infrastructure initiatives enjoyed widespread consensus. This was as true in hydropower developments such as Trisuli, Sunkosi and Panauti as in highways such as Tribhuban, Arniko, and Prithvi as well as airports big and small, or institutions such as the Rashtra Bank.

When by the 1970s foreign aid, and today foreign investors, started calling the shots, when international and national merchants of development began to corner a larger share of the aid money by means fair and not so fair, that national consensus (purba sahamati) has broken down when it comes to infrastructure (purbadhar) projects in Nepal. One would have thought a democratically elected parliament would be that forum where a consensus would be forged; but given its dysfunctional character, primarily because Nepal's Loktantrick politics is oiled by corruption money, the parliament has failed to play that role. It was true of Mahakali Treaty in the mid-1990s and it is turning out to be even more true for MCC as well a quarter of a century later.

Kickback commission deals that began with Kulekhani-1 have become the norm in all infrastructure development projects from hydropower to roads and railways and even airports, and not just by Nepalis but international donors as well (see a previous writeup on larceny in infrastructure). Many senior politicians and their political parties thrive on it, indeed it being the main reason they raise money for expensive electioneering and personal pelf. There is increasing frustration among the citizens at the inordinately high cost of infrastructure development which ends up at the tax-paying citizens' wallet and makes Nepal's economy uncompetitive. Why should Nepal's hydropower projects cost, on an average, some $2500 and more per kW (Arun-3 was planned at $5400!) when Ethiopia has been able to build the 6000 MW Grand Renaissance Dam at $800/kW? Why is the proposed 400 kV transmission line to be built under MCC three to four times more costly per km than what the NEA (no paragon of virtue) has been able to build? The same holds true for roads, airports, hospitals and everything else.

It can safely be concluded that the trend we are seeing of declining foreign aid, its being tied with the security and foreign policy requirements of donor countries in a more blatant manner, is only going to accelerate in a post-Covid world. Nepal's public finances are wholly dependent on remittances and the indirect taxes they allow as people buy better nutrition, healthcare and education for their children. In comparison, foreign aid is losing relevance and foreign direct investment remains negligible for understandable reasons: when Nepalis are reluctant to invest in long-term industries (for fear their investments will be lost to thieving political parties and rent-seeking bureaucracy), why would foreigners be interested in investing here?

Getting out of this economic quagmire will require an ethical Green Democratic Socialist politics, which sadly is nowhere on the horizon!