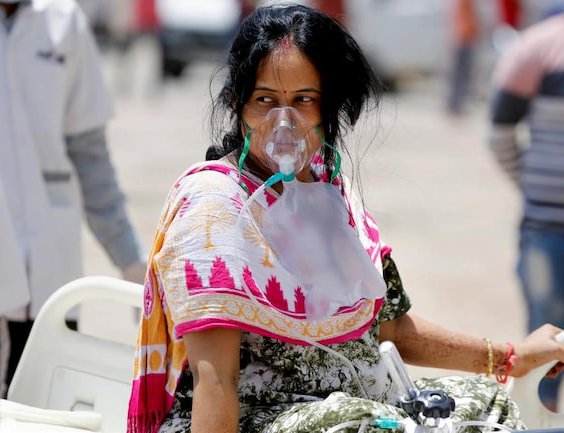 India recorded over 3 lakh cases for the second straight day on Friday, clocking 3,32,730 cases in the last 24 hours, the Union Health Ministry informed. With this, India’s trend of registering the world’s highest daily tally continues, pushing the country’s total infection count to 16,263,695 cases. As many as 2,263 people also died of Covid-19 in the last 24 hours, mounting the coronavirus death toll to 186,920.

Chairing a meeting with chief ministers of different states, Prime Minister Narendra Modi Friday said the railway and Air Force have been deployed to reduce the travel and turnaround time for oxygen tankers so that states facing a shortage of medical oxygen could get it in time. The PM also said that every state should ensure that no oxygen tanker, meant for any state, is stopped or gets stranded.

Delhi on Friday reported a staggering 348 deaths due to Covid-19 as hospitals in the national capital continued to grapple with a severe shortage of medical oxygen. As many as 24,331 fresh cases were reported in the last 24 hours. A total of 23,572 people have recovered from the infection while 75,037 people were tested during the day. The positivity rate was recorded at 32.43 per cent. Earlier in the day, Chief Minister Arvind Kejriwal, during his meeting with PM Modi, had highlighted the crippling oxygen crisis in hospitals in the capital.

Meanwhile, Prime Minister Modi Friday held a meeting with leading oxygen manufacturers across the country, asking them to utilise the industry’s full potential to meet medical oxygen demand in the coming days. The PM said there was a need to increase the availability of oxygen cylinders as well as to upgrade logistical facilities for its transportation, PTI reported.

Drugs Controller General of India (DCGI) approves emergency use for Zydus Cadila’s Pegylated Interferon alpha-2b, ‘Virafin’ for the treatment of moderate Covid-19 infection in adults. A single dose of Virafin shows significant improvement as 91.15% of patients were tested RT PCR negative by day 7. It also reduces hours of supplemental oxygen in the patients.

The crisis of hospital beds — especially ICU ventilator beds in Bengaluru — is reflected in the spiralling Covid-19 deaths in the city, recording 124 deaths on Friday — the first time the 100-mark was breached.

The record number of deaths has resulted in the seven Covid-19 crematoriums in the city working overtime to cremate the average 20-25 dead bodies arriving each day — compared to four or five in normal times.

The sharp spike in Covid-19 cases and deaths has resulted in Karnataka Chief Minister B S Yediyurappa remarking that the situation has gone “out of control”. At a meeting with health officials on Friday, Yediyurappa ordered a 10-fold increase in ICU ventilator beds in Bengaluru.