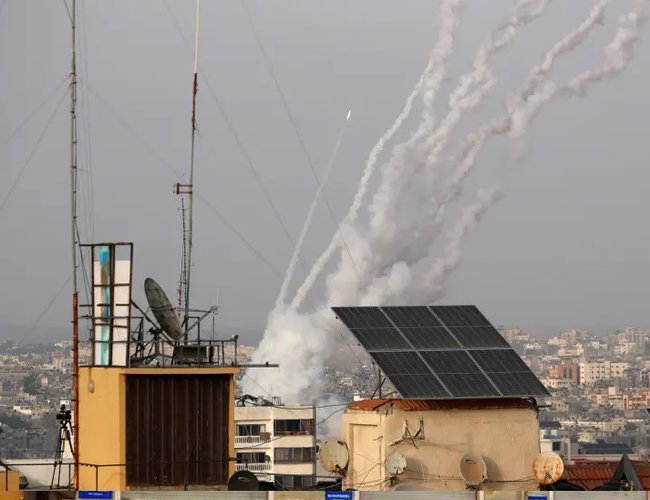 The five-year-old boy succumbed to his wounds several hours after a direct hit to his Sderot home. Several hours earlier an IDF soldier was killed in Hamas anti-tank missile attack.

After several hours of quiet, rocket fire resumed early Thursday, and sirens were heard in Ashkelon and the surrounding regions. They also sounded across the center and south of the country, as well as northern Israel, as far as the Galilee region. One rocket is reported to have directly hit Rishon Lezion, and another in Petah Tikva.

Five people are being treated for minor injuries in Petah Tikva, several of them caused by anxiety and smoke inhalation.

Israel's security cabinet on Wednesday night approved the recommendation of IDF Chief of Staff Lt.-Gen. Aviv Kohavi to escalate retaliatory airstrikes into the Gaza Strip. Defense Minister Benny Gantz is briefing members of the Knesset as Prime Minister Benjamin Netanyahu declared that Israel will not accept a ceasefire with Hamas and Palestinian Islamic Jihad.

An IDF soldier was killed by an anti-tank missile early Wednesday morning and a five-year-old boy was killed later in the day when a rocket scored a direct hit on his family's apartment building in Sderot. More than 1,200 rockets have been fired into Israel since the fighting began on Monday.

A rocket barrage was launched toward central Israel on Wednesday evening and sirens sounded in Tel Aviv and throughout the South as Hamas launched the rockets to avenge the deaths of its top commanders by Israel earlier in the day.

Two people were reportedly injured in a terrorist attack in the West Bank (Samaria) late Wednesday night, and the terrorist was neutralized on the spot, according to the IDF. The incident is under review.

The rockets either fell in open areas or were intercepted by the Iron Dome missile defense system. In Ashkelon though, one of the rockets scored a direct hit on a home, causing extensive damage to one of the bedrooms. A child had been sleeping there moments earlier and was whisked to safety when the sirens sounded.

Earlier in the day, IDF St.-Sgt. Omer Tabib was killed and three other soldiers were injured after a Hamas-fired Kornet anti-tank guided missile (ATGM) hit his jeep near the Gaza border. The attack came after a night of intense rocket barrages toward the center of the country.

The jeep, belonging to the 931st Nahal battalion, was inside the Kibbutz of Netiv Ha'asara but was at a spot where it was exposed to the ATGM when it was struck.

Netanyahu said on Wednesday afternoon, "On behalf of all Israeli citizens, I express my deepest condolences and send my condolences to the family and friends of the IDF soldier, the late Staff Sergeant Omer Tabib, a fighter in the Nahal Brigade who fell this morning from anti-tank fire during an operation to protect the Gaza Strip.

"I send my best wishes for a speedy and complete recovery to another fighter and another officer who were injured in the attack."

Shortly before the attack, the IDF warned residents of communities near Gaza to remain at home out of concern that Hamas might fire short-range mortars, ATGM’s or sniper attacks against civilians in the area.

Updated Home Front Command directives have been put in place from Wednesday at 6:00 p.m. until Friday at 2 p.m. In the Gaza border communities, the Western Negev, the Shfela region, Sharon and Yarkon, up to ten people will be allowed in open areas and 100 inside. It is permitted to work in places where there is an accessible rocket shelter. Educational institutions will be closed.

He thanked the doctors for saving the life of a three-year-old girl named Orin, pointing out that next to her was a child from Gaza, who was also being treated at that hospital, saying that "it shows you all the difference between the people of culture and the people of darkness."

Netanyahu commented on the recent string of assassinations in the Hamas General Staff, adding that "This is just the beginning. We will strikes them with blows they haven't dreamed of."

Hamas launched a barrage of rockets at Ashdod and Ashkelon on Wednesday afternoon following the strike against the top Hamas command, in which some six senior terrorists were killed. The incident came as the Israeli military continued to carry out waves of airstrikes targeting Hamas terrorists, including senior commanders.

Over 850 rockets crossed into Israeli territory after being launched from Gaza, and another 200 fell inside the Hamas-run coastal enclave. Several rockets have made direct hits on buildings and cars in Israel, killing six Israelis.

Two of those killed were identified as Khalil Awad, 52, and his daughter Nadin, 16, Arab-Israeli residents of a town near Lod, who were killed after a rocket scored a direct hit on a car in Lod early Wednesday morning.

The rocket struck Lod as the mixed Jewish-Arab city was shaken by violent riots throughout the night and brought the death toll in Israel up to five since the fighting began on Monday. Two women were killed in Ashkelon on Tuesday afternoon; in the evening, another woman was killed by a rocket that struck in Rishon Lezion.

Gantz stressed that the IDF will continue striking Gaza until it can bring a "complete and long-term peace," during a visit to Ashkelon on Wednesday.

"In the last few hours, the IDF has carried out a series of significant attacks. We have attacked squads of commanders and significant Hamas infrastructure and we will continue to protect all residents of Israel," said Gantz. "We have attacked many hundreds of targets, towers are falling, factories are collapsing, tunnels are being destroyed and commanders are assassinated. All the means and all the options are on the table and there is a lot more activity in the bank."

"The IDF will continue to attack and bring a complete and long-term peace," added Gantz. "Only when we achieve this goal can we talk about calm. There is currently no end date. We will not accept moral sermons from any organization or institution about our right and duty to protect Israeli citizens."

Gantz decided on Wednesday afternoon to extend the special situation in the home front for an additional two weeks in light of the ongoing rocket attacks against Israel and plans to expand IDF strikes against the Gaza Strip.

More rockets pounded Israel throughout Tuesday night into Wednesday morning with sirens sounding throughout the center of the country including Tel Aviv and particularly in the South, including Beersheba.

A meeting of the security cabinet planned for Wednesday night at 9 p.m. was moved up to 5:30 pm.

"Tonight the cabinet will meet," said Prime Minister Benjamin Netanyahu during a visit to Acre earlier in the day. "There have been difficult developments, including the firing of anti-tank missiles. There have been a series of incidents that have knocked into each other. We are using all our strength to defend the country from enemies outside and rioters within."