Over 750 Hamas targets have been hit since the beginning of Operation Guardians of the Walls. 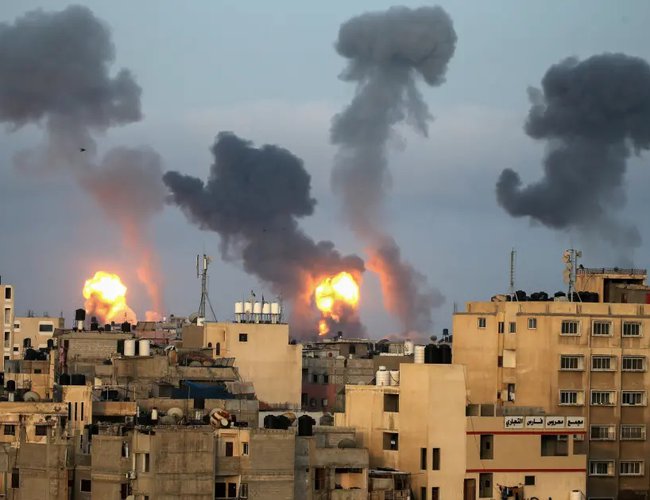 IDF air and ground troops attacked in the Gaza Strip Thursday night, the IDF Spokesperson's Unit reported. The Israeli military has struck over 700 Hamas targets since Operation Guardians of the Walls began on Monday, including senior commanders and attack drones launched by the terror group.

In the four days since Operation Guardians of the Walls began, an operation which is 95% airstrikes, over 700 Hamas targets have been hit by the Israeli Air Force and 60 operatives including senior commanders, have been killed.

The opening strikes by the IAF included key Hamas infrastructure which according to the military will affect the terror group for years to come.

Some 60 Hamas operatives have also been killed including 10 senior commanders since the operation began on Monday. According to Gaza's Health Ministry, 103 Gazans were killed on Thursday, and 580 were injured.

On Thursday morning the IDF bombed government targets, Hamas’s central bank, a force that the Israeli military said belonged to the terror group’s navy unit as well the home of Iyad Tayeb, a top Hamas commander who oversaw a number of battalions. The IDF said that the home was being used for terrorist purposes.

“Tonight we started destroying government targets in the Gaza Strip, such as central banks and internal security buildings. Hamas is beginning to discover cracks and there is pressure in the organization, even among the Gaza public who is losing its patience and sees these ruins on the eve of the [Eid al-Fitr] holiday,” he said.

Among targets belonging to Hamas that have been struck since the beginning of Operation Guardian of the Walls, include facilities belonging to their police, Interior Security Ministry and banks as well as homes of commanders including that of the battalion commander of Khan Yunis and the office of Hamas' head of public security in Rafiah, as well as a naval commando unit and defensive tunnel inside a school.

Four high-rise buildings were also destroyed by Israel Air Force airstrikes as well as the “operational apartment” of the head of Hamas’s drone unit Samer Abu Daka. The IDF said that the apartment was used for military purposes and had been targeted during Operation Protective Edge in 2014.

Another four “operational apartments” used to direct recent rocket attacks towards Israeli cities and belonging to senior Hamas commanders in Gaza were also hit. The apartments belonged to the deputy commander of Hamas’s Jabalya regiment in the northern Strip, as well as three company commanders in northern and central Gaza.

A Hamas intelligence facility that served as the main command center for the group’s surveillance network with dozens of operatives inside was also hit by an IAF airstrike on Thursday afternoon.

Some seven anti-tank guided missile cells were taken out by the IDF on Thursday alone.

Since the fighting began, the Israeli Air Force has also destroyed several Hamas drones, some laden with explosives, that crossed into Israel.

The drones were downed by the IAF using F-16 fighter jets, Python-5 missile and Iron Dome missile batteries before crossing into Israel while others exploded in the air.

Several drones have been launched by Hamas since the fighting began and in one video released by the military on Thursday, an F-16 fighter jet can be seen downing a suicide drone which carried about 5 kg. of explosive payload.

The military believes that though the drones are assembled in Gaza, many of the components are smuggled into the blockaded coastal enclave.

The IDF sees the operation continuing in order to strike additional targets that are key to Hamas’s military strength.

Over 1,500 Die In Devastating Earthquake In Turkey By Agencies 2 days, 7 hours ago