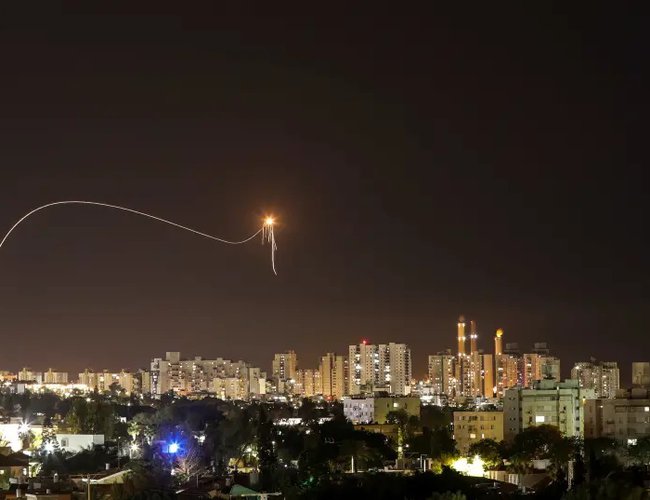 Rocket sirens continued to blare throughout the night in Ashkelon and Beersheba, with two separate barrages being aimed at each city, as Gaza terror groups continue their assault on Israel late into the night.

No one was injured but rockets slammed into buildings in Ashkelon and Ashdod. In Ashkelon, a rocket scored a direct hit on a synagogue, causing extensive damage.

Magen David Adom treated 66 people injured by rocket fire while seeking shelter and in Jewish-Arab riots between Saturday and on early Sunday morning and 282 people since Monday.

A few minutes later, a massive barrage was launched towards the Israeli south, with one rocket landing directly on a synagogue in Ashkelon. Video footage from the scene showed Israelis praising God for the "miracle" that the rocket missed the Torah scrolls by centimeters.

Two more rockets which hit Ashkelon destroyed five cars and a house. Another rocket reportedly hit a house which was under construction in Ashdod. No injuries were reported in either strike.

Another rocket reportedly landed near a supermarket in Beersheba during the Sunday afternoon barrage. No injuries were reported in that incident as well.

Hamas said it launched the barrage towards Tel Aviv in response to "the massacre of women and children at the Shati refugee camp."

The airstrike on the Shati refugee camp killed ten people including eight children. The IDF said that the strike was against an apartment that “serves as terror infrastructure” for Hamas. “The IDF takes precautions to minimize possible harm to civilians during its military activities,” the statement added.

Other rockets fell in the Arab-Israeli town of Taibe and others near the West Bank cities of Ramallah and Tulkarem.

Shrapnel also fell near the Safari in Ramat Gan.

The Saturday barrage came after Air Defense Artillery soldiers downed a drone armed with explosive devices that crossed into Israel from Gaza, according to the IDF Spokesperson's Unit.

On Saturday, a man was killed in the central city of Ramat Gan after Hamas fired a volley of close to 30 rockets at central Israel in a large afternoon barrage on the sixth day of fighting between the Israeli military and Hamas.

Buildings and cars in Israel sustained direct hits from rockets launched from the Gaza Strip during salvos overnight Friday and Saturday morning in the sixth day of fighting between the Israeli military and Hamas.

Close to 300 rockets were launched from the Gaza Strip between 7AM on Saturday until 9 p.m. with about 40 of them falling short into the Gaza Strip. Dozens of other rockets were intercepted by the Iron Dome missile defense system.

Over 2,000 rockets have been launched from the Hamas-run enclave since the start of the fighting on Monday.