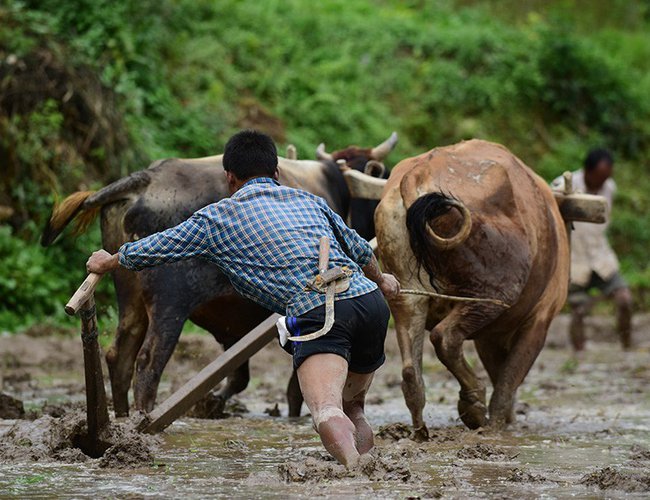 Rice is one of the best, most nutritious, and most widely used crops in the world. In the case of Nepal, rice is undoubtedly the most important grain. According to our cultural beliefs, 15 Ashadh is considered an auspicious day for planting paddy for the year. The annual festival of Nepal, National Paddy Day (Nepali National Paddy Planting Day) begins with the making of a terrace in the village before entering the rice field.It seems that an essay writing competition is also being organized with the theme "Increase paddy production for self-reliance"

In the competition, participants are allowed to share their knowledge, ideas, and thoughts on any topic related to rice such as paddy, rice cultivation, seedbed preparation, harvesting process, production, history of rice, variety, etc.

The contribution of agriculture (agriculture, forestry, and fisheries) to the GDP in the Fiscal Year 2068/69 was 32.7 percent. The price per quintal of thick and fine has been fixed at Rs. 2,735 and Rs. 2,885 respectively.

The paddy planting season has started again, and it is the most important season of the year for everyone. Paddy is planted on 1.6 million hectares of land, resulting in a harvest of 5 million tons of paddy, and a per capita consumption of about 120 kg of milled rice. Nepalis have maintained paddy as the major crop for the longest time. Rice contributes 20 percent to the gross domestic product of agriculture, more than 50 percent of the total grain food production, and about one-third of the caloric intake for Nepalis. Farmers across the country harvest maize and other crops in their fields to plant paddy on time

The monsoon has arrived very early this year and farmers are hopeful that their most important crop will bear fruit. Not all is well in the business of paddy planting as the country uniting around paddy has ignored the obstruction of paddy farmers.It all starts with sluggishness on the part of the government.

With the timely purchase of much-needed chemical fertilizers, the mandatory institutions are always seen as useless and the farmers are left with few options but are forced to buy fertilizers at exorbitant prices or cultivate them without using them at all. But the problem faced only by the paddy farmers due to lack of fertilizer has not been solved.

Growing paddy, like other sub-sectors of agriculture, has been hit hard by the 'Asare Vikas' insect, which has hit Nepalis hard in the past. The eagerness to build roads at night, often without proper engineering and budget, means that the newly constructed roads cross irrigation channels and agricultural areas. In addition, the lack of coordination among state institutions has led to delays or sometimes neglect in the reconstruction of irrigation channels and agricultural areas.

As a result, huge expanses of areas become barren each year.

To increase paddy production, large tracts of land traditionally used for paddy are declining due to rapid urbanization. After many hectares of land, it continues to be turned into a housing colony. Apartment buildings are being built on paddy-growing land. As a result, formerly green-golden paddy fields have now been turned into ugly concrete jungles.

Traditional estimates suggest that urbanization of paddy land has damaged about 100,000 hectares of land over the past decade.

In Nepal, where per capita income is very low, the cost of mechanization in agriculture is very high. In addition, rising labor costs and a shortage of agricultural labor have forced people to move to urban areas in search of work. Even higher costs are a problem for farmers who want to modernize their farming techniques and increase their productivity.

Nepal imports about 20 billion rupees rice from India. Nepal fell from the highest paddy production in South Asia in the 1960s to its lowest today. The loss is ours. As a country that loves rice, we have not been able to sustain it. With a little help from the government, farmers are looking for alternatives to abandoning paddy farming altogether. It is high time that governments at all levels work together to help paddy regain its lost significance.

Paddy farmers are happy that the monsoon has arrived on time this year and they are busy sowing. But this year, as every year, the farmer has something on his mind: Will there be an adequate supply of chemical fertilizers?

Farmers have planted rice seedlings, the world's most widely used phosphorus fertilizer, and Diammonium Phosphate (DAP) has not been applied. Because we can't stop water or rain.Thousands of Nepali farmers are worried that last year's manure blockade may repeat what Nepalis working in different parts of India did as they lost the super crop due to good monsoon rains and ample labor. He returned home to escape the epidemic.But this year there is no problem due to lack of chemical fertilizers and availability. The Steering Committee of the Crisis Management Operations Center of Covid 19 has at least got the authority to stop the epidemic of Covid 19.

Food has been removed from the list of "essential items". At the same time, farmers were confined to their homes by lockouts.Officials at the Agricultural Ingredients Company, the main supplier of state-subsidized chemical fertilizers, said sales resumed last week, but stocks at any depot or cooperative did not last long. The annual life-giving rain officially started falling in Nepal on June 11.

According to the Weather Forecast Division, the monsoon clouds have entered the country from the east and spread to Province 1, Province 2 and Bagmati Province. According to the Agricultural Ingredients Company, there were some problems in the distribution system in the ban. Now the solution.Paddy is planted on 1.6 million hectares of land across Nepal and is a major source of income for 60 percent of the population.

The agricultural sector contributes 20 percent to the national GDP, which is only 7 percent.Paddy sowing starts in the month when monsoon soaks the soil. Harvesting begins in November.Most of the country's economic growth is determined by paddy production as many Nepalis depend on agriculture for their livelihood. Farmers suffered huge losses last year due to a lack of fertilizer during the major planting period. There were sporadic shortages due to disruptions in the supply chain. But now it seems that this mistake has been resolved

Many farmers in the plains go to the markets near the southern border to buy banned fertilizers as there is a huge gap between supply and demand. According to the Ministry of Agriculture, official imports are lower than the annual demand for chemical fertilizers.

According to agronomists, there are many questions to be asked to the agrarian Nepalis of the agricultural country: what kind of paddy are you planting? Kanchi Mansuli, Basmati, Ghaiya, Kariyakamat, Bagdi or any other.

Welcome to the 15th of Asar, this year too, like other years, Asar has come with clouds, mud and green. Asar, the third month of Bikram Sambhat, literally means Asar is an agricultural village in Lorestan district of Iran. Remember that in the Nepali dictionary we use Iranian words as dimensional words a lot, in this sense it is confirmed that there is an old relationship with Iran and Devanagari script.

Therefore, after the 15th of Asar, the clouds are fully mature and the streams of water are raining down, the soils are reduced to mud in the form of mud and we plant rice plants secretly in the same low soil. This may be the reason why the 15th of Asar is considered as the National Paddy Day.

Rejoicing with each other by planting paddy secretly in the mud shaken by the plowmen, the planters and the buffaloes love the soil that gives food by playing with the mud and even exchanging love with each other through the verses of the song.

I am disgusted with the muddy mud of Asare month,

It cost six or twenty rupees to buy a thin cloth for a baby.

Drought-torn minds will be reunited with Asar,

Paddy Day has been celebrated every year since 2060 BS.

If you eat yogurt beaten rice when you have diarrhea, it works as a medicine. Therefore, the culture of eating curd chura has taken a big shape in Nepali culture. Thus, Asar 15 has succeeded in becoming a national cultural festival in Nepali society. It is believed that if paddy is planted in this way, it will produce a decent amount from the field.

Sing is a former CEO of NEPSE. SEZ, Nepal Chamber of Commerce.