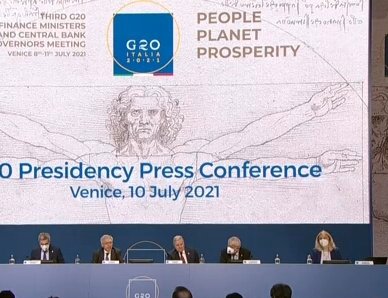 Finance ministers and central bank governors from the Group of 20 nations have reached a "historic agreement" on new rules to tax multinational companies.

The G20 finance chiefs wrapped up two days of talks in the Italian city of Venice on Saturday with the adoption of a joint communique.

It says the finance chiefs endorse the action of a group of 132 countries and territories to set a minimum global corporate tax at 15 percent. That is in a bid to end global competition to offer the lowest corporate tax.

The group is mainly made up of member states of the Organization for Economic Cooperation and Development, or OECD.

Ireland and other countries have tried to attract multinationals with lower corporate tax rates. They have not joined the agreement.

The communique urges all nations and territories which have not joined the agreement to do so.

And it also encourages finalizing the details of the rules by the next G20 meeting scheduled for October.

Negotiations will continue with the goal of reaching a final deal by October.

Ukrainian Soldiers Arrive In Britain For Tank Training By Agencies 9 hours, 11 minutes ago