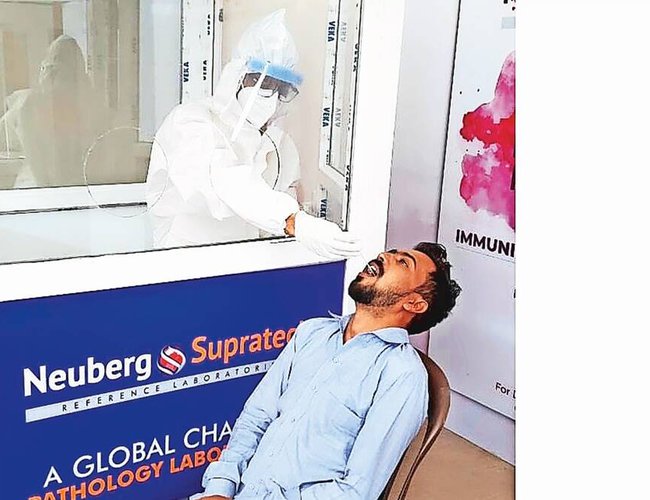 About 1 in 10 people who caught the coronavirus infection after being vaccinated required admission to hospital for treatment of the disease, a new study commissioned by the Indian Council of Medical Research (ICMR) has shown.

“This is highly significant, and underlines the crucial role of vaccines in reducing severity of the disease and mortality,” Dr Samiran Panda, Head of ICMR's Epidemiology and Communicable Diseases division, told The Indian Express.

“In the larger population, we have seen about 3 to 5 per cent of patients in hospital requiring oxygen support, and about 2 per cent being put on ventilators,” Dr Panda said.

Crucially, none of those admitted to hospital required ventilator or oxygen support, and none had to be put into ICU.

“This is highly significant, and underlines the crucial role of vaccines in reducing severity of the disease and mortality,” Dr Samiran Panda, Head of ICMR’s Epidemiology and Communicable Diseases division, told The Indian Express.

“In the larger population, we have seen about 3 to 5 per cent of patients in hospital requiring oxygen support, and about 2 per cent being put on ventilators,” Dr Panda said.

The researchers tracked 677 individuals from 17 states and Union Territories who got Covid even after being vaccinated. Sixty-seven of these cases (9.8 per cent) required hospitalization; three of them died.

In a vast majority of the ‘breakthrough’ cases, the patient was infected with the Delta variant of SARS-CoV-2.

“…Only 9.8% cases required hospitalization while fatality was observed in only 0.4% cases,” the study reported. “This clearly suggests that the vaccination does provide reduction in hospital admission and mortality,” it said.

Eighty-five patients caught the infection after taking the first dose of the vaccine, while the remaining 592 were infected after receiving both doses.

As Covid-19 vaccines are administered to people in countries around the world — over 31.3 crore in India had received at least one dose until Thursday — there is some concern over a small number of people getting infected with the virus even after being inoculated.

As of July 6, the Centers for Disease Control and Prevention (CDC) in the United States had received reports of 5,186 patients with Covid-19 vaccine breakthrough infection who were hospitalised or had died. By that day, more than 157 million people in the US had been fully vaccinated, making the breakthrough rate for severe disease a minuscule 0.003 per cent.

After smaller studies reported breakthrough infections in Kerala and Delhi, ICMR in April-May commissioned the nationwide study to understand the clinico-demographic profile of patients and SARS-CoV-2 strains responsible for post-vaccination breakthrough infections. Most of India experienced a deadly second wave of the pandemic from March to June, of which a three-week period in April-May was the worst.

The researchers conducted telephonic interviews with each breakthrough case during the period May 25 to June 14, Dr Pragya Yadav, ICMR-NIV scientist and corresponding author of the study, said.

Of the 677 patients in the study, 604 had received Covishield, 71 had got Covaxin, and two had got the Chinese-made BBIBP-CorV Sinopharm/China National Pharmaceutical Group vaccine.

The median age of patients in the study was 44. A total 441 of the breakthrough cases were males. Co-morbidities were observed in 154 out of 677 cases (23 per cent), which included diabetes mellitus type-II, hypertension, as well as chronic cardiac, renal and pulmonary diseases, and obesity.

While 482 cases (71 per cent) were symptomatic with one or more symptoms, 29 per cent had asymptomatic infection. Fever was the most consistent presentation (69 per cent), followed by bodyache including headache and nausea (56 per cent), and cough (45 per cent).