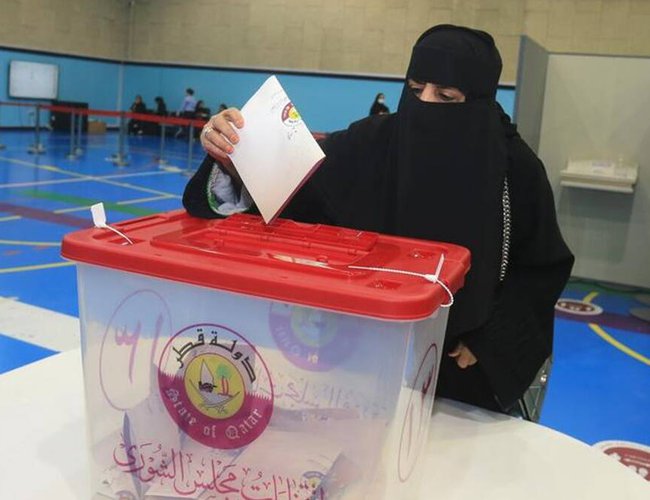 Qatari citizens voted for the first time in elections on Saturday for an advisory council, a process that has prompted domestic debate about electoral inclusion and citizenship.

The Gulf country first introduced plans for the legislative elections in its 2003 constitution, but authorities repeatedly postponed the vote.

Even though the long-delayed measure appeared to aim to give Qataris more say over how they’re ruled, the Shura Council has no say in the matters of defense, security, economic and investment policy.

Despite 28 women initially being cleared to run in the polls, male candidates were elected in all 30 seats, according to the tally reported by local media.

Turnout for the elections was around 63.5%, officials said.

Like other Gulf Arab states, Qatar bans political parties. Foreign workers outnumber Qatari citizens in the small but wealthy nation of 2.8 million nearly nine to one.

The 2022 World Cup has generated pressure for reform in the hereditarily ruled nation.

Qatar’s deputy prime minister and foreign minister, Sheikh Mohammed bin Abdulrahman al-Thani, last month described the vote as a new “experiment,” and said the Council cannot be expected from the first year to have the “full role of any parliament.”

Rights groups have criticized Qatar’s electoral law, which differentiates between born and naturalized Qatari citizens, and bars the latter from electoral participation.

The system excludes thousands from running or voting, which have triggered minor tribal protests that led to several arrests.

Ukraine welcomes US Offer Of Long-Range Rockets By Agencies 21 hours, 44 minutes ago

US Shoots Down China's Balloon, Says Defense Department By Agencies 21 hours, 59 minutes ago