Today is the fhe third manifestation of Goddess Durga is Goddess Chandraghanta (or Chandra-khanda); she is worshipped on the third day of Navratri. 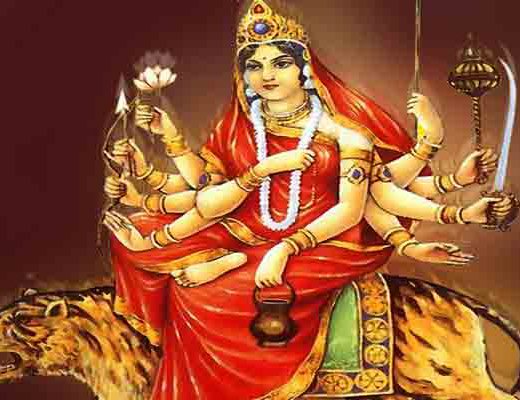 It is the third day of the nine-day Hindu festival Sharad Navratri 2018. Navratri 2018 started on 10th October and would end on Navami, 18th October 2018. Navratri holds a special significance for believers of Goddess Durga. For these nine days, devotees wake up early, pray to Goddess deity and make multiple offerings. Some devotees also observe ritualistic fasts and abstain from meat, alcohol and smoking. Each day of Navratri is dedicated to an avatar of Goddess Durga. The nine incarnations of Durga together are referred to as 'Navdurga'. The nine forms of Durga are Shailputri, Brahmacharini, Chandraghanta, Kushmanda, Skandmata, Katyayani, Kaalratri, Mahagauri and Siddhidatri.


The third manifestation of Goddess Durga is Goddess Chandraghanta (or Chandra-khanda); she is worshipped on the third day of Navratri. According to scriptures, she is a ferocious 10-armed goddess. She rides a tiger and is armed with many different weapons. Chandraghanta carries trishul, gada, sword and kamandal in her four left hands. The Goddess wears a crescent moon on her forehead, which gives her the name Chandraghanta. 'Chandra' in Sanskrit means moon. Goddess Chandraghanta signifies the alternate side of the calm and docile Goddess Mahagauri. Her warring stance is the reminder of the fact that she can be both benevolent and violent, depending upon the nature of the situation. Legends state that during one of the great battles between gods and the demons, the sound vibrations produced by her 'ghanta' or bell took the lives of many demons.


People worship Maa Chandraghanta to keep all evil energies away from their lives. She is said to rid the world of all sins, physical sufferings, and evil powers. Devotees offer milk or kheer to the Goddess as part of bhog. Milk is said to be a particular favourite of the Goddess. You can also offer her sweets made of milk or kheer.

Two Shilas Left For Ayodhya From Janakpurdham By Agencies 2 days, 15 hours ago