Nepal In CoP26: Commitments And Funding

Nepal drew the attention of the international community on climate change impacts in the Himalayas in 2009 by organizing a cabinet meeting at Kalapatthar (with Everest Declaration), a demonstration including mountaineers in Copenhagen, and a conference on 'Kathmandu to Copenhagen' to develop a common voice of the South Asian countries for CoP 15, including a 'gift' of 'Kalapatthar, black stone) to the then US President in New York. 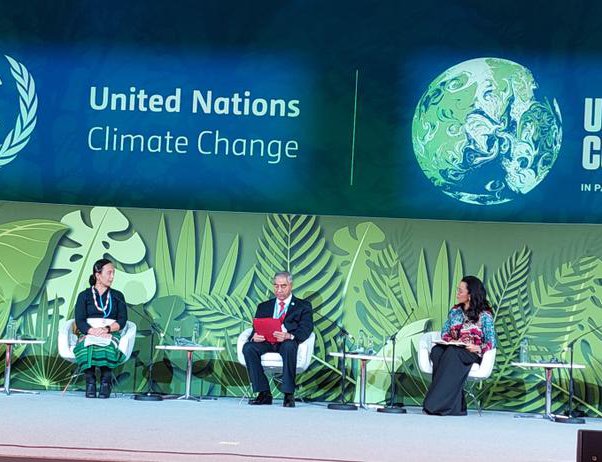 After entry into force of the UN Framework Convention on Climate Change (UNFCCC) and the Kyoto Protocol, Heads of States or Governments of Parties to the Convention made statements in the High Level Segment (HLS) or Leaders' Summit in three sessions of the Conference of the Parties (CoP) namely, CoP 15 in Copenhagen, CoP 21 in Paris, and CoP 26 in Glasgow to provide political guidance to reduce GHGs emissions and help climate vulnerable people and resources to adapt and build resilience to climate change. Heads of the Government of Nepal attended Copenhagen and Glasgow Climate Change Conferences (CCC). In addition, President of Nepal made a statement in the HLS in 2018 in Katowice, Poland.

Nepal drew attention of the international community on climate change impacts in the Himalayas in 2009 by organizing a cabinet meeting at Kalapatthar (with Everest Declaration), demonstration including of mountaineers in Copenhagen, and a conference on 'Kathmandu to Copenhagen' to develop a common voice of the South Asian countries for CoP 15, including a 'gift' of 'Kalapatthar, black stone) to the then US President in New York. At the sideline of the regional conference, A 'compact on climate change' was signed between the Government of Nepal and development partners namely CIDA, SDC, Finland, AusAID, SNV, European Commission, ADB, WB, DFID, Germany, Embassy of Denmark, Norway, USAID and UNDP. This compact includes, inter alia, 'the development partners fully appreciate the urgency of climate change challenges in Nepal and express their willingness to assist Nepal in addressing climate change vulnerabilities'. It would be appropriate to document the support received and its effectiveness in reducing climate vulnerabilities.

In Copenhagen, then Rt. Hon. Prime Minister Mr. Madhav Kumar Nepal informed to launch 'Mountain Initiative' (MI). As a part of MI, Nepal planned to organize international conference of mountain countries on climate change in 2010 but it could not happen and this conference was organised in April 2012 with participation of around 30 countries which agreed on Kathmandu Declaration. In 2014, Rara declaration on climate change and environmental threats: protecting lives and livelihoods of mountain people was also released.

In 2018 in Katowice, Rt. Hon. President Bidya Devi Bhandari focused on impacts of climate change in Nepal and the Himalaya. The President inaugurated a national climate change conference in Gufadanda, Sindhupalchowk in January 2019 which also released 10-points declaration. A 17-points Nepalgung declaration was also made in 2019 on the occasion of the World Environment Day. These declarations provide ample opportunities to implement climate change programmes.

In Glasgow, Rt. Hon. Prime Minister Mr. Sher Bahadur Deuba re-informed on 'decarbonizing Nepal's economy in all sectors .. and reach to a net-zero emission by 2045' by highlighting, inter alia, climate change impacts in the Himalayan region and by mentioning around 80 percent of the total population at risk from natural and climate-induced hazards. The Prime Minister has urged the world leaders to accord 'high priority to the mountain agenda in all climate-related negotiations' and called upon to make 'loss and damage a stand-alone agenda for negotiations' in line with LDC's call. 'Conditional net-zero emissions' was previously informed to achieve in 2050.

The Warsaw International Mechanism (WIM) for Loss and Damage associated with climate change impacts was established in 2013 (CoP 19) at a time Nepal led the LDC Coordination Group. It recalls Nepal's stake on loss and damage in climate change negotiations, and damages from 2021 climate-induced disasters urged to wake-up and raise this issue repeatedly. Issues raised are recorded without decisions and future actions. Recalling the previous negotiations, it is most likely that LDCs will continue to raise it and developed country Parties to UNFCCC will further continue to 'dilute' negotiations on this issue and limit on WIM.

CoP 26 press notice of the Government of Nepal mentions conditional recommitment on net-zero emission by 2045 and carbon negative thereafter. Nepal will require US$ 250 billion to deliver her green, resilient, inclusive development goals and climate targets.

Mitigation commitment and/or net zero emission is extraordinary for a LDC Nepal. Recalling Nepal's greenhouse gas emissions (around 0.056 % of the total global GHGs emissions as per Third National Communication Report, 2021), Nepal's fulfillment of net zero emission commitment by 2045 with full funding and effective implementation will contribute to reduce less than 0.1 percent of the total GHGs emissions. Nepal's mitigation commitments would have no global significance in reducing GHGs emissions. If financial and technological support received, it may change existing track towards climate-friendly development and infrastructures. Key question is: will we get around US$ 140 billion to implement long-term strategy and NAP as estimated or US$ 250 billion for green and resilient development? Let us 'dream' that Nepal will be supported financially to make our economy and infrastructures climate-resilient and protect life, property, livelihoods and resources from climate change impacts.

In Glasgow, most of the high GHG emitting countries have 'pledged' to reduce GHGs emissions but it would not contribute to keep temperature rise to 1.5 degree Centigrade by the end of 2100. Let us hope that political message of the World Leaders Summit will guide negotiations to reduce GHGs to meet the legal provisions of the Paris Agreement by 12 November 2021.

Glasgow decisions on adaptation would help climate vulnerable communities and natural resources to adapt to and build resilience to climate change impacts, and implement NAP as well. Few conclusions of the first half of the CoP 26 indicate hopes.

On LDC matters, CoP 26 is expected to extend the mandate of the LDC Expert Group (which supports LDCs on ways of accessing relevant sources of financing, capacity-building and technology transfer for adaptation) till 2031 (10-years extension) with provision for review its progress and terms of reference in 2026. The composition of the Group is also extended from 13 to 17 members. Unlike previous decisions, Parties are encouraged to take into account, inter alia, gender balance, youth engagement, experience in climate finance, and expertise in project design and implementation, indigenous and traditional knowledge, and education while proposing LEG members. Nepal served as the Chair of the LEG for two years (2014-2015). CoP26 is expected to decide to initiate the assessment of progress in the process to formulate and implement NAP taking into consideration its guiding principles.

As of 10 November 2021, several countries have pledged a total of US$ 413 million to LDC Fund. Each LDC receives equal amount from LDC Fund. If all pledges are timely channeled to LDCF, Nepal's share would be close to US$ 9 million (from this pledge). Fifteen countries have pledged nearly US$ 352 million for the Adaptation Fund (Nepal served as the Chair of the Fund Board in 2016), including first-time contributors USA and Canada. Nepal may access financial resources from Adaptation Fund as well.

Climate vulnerabilities & risks and climate-induced disasters in 2021 indicate the urgency of huge investments to reduce vulnerability, adapt and build resilience to climate change. No doubt, Nepal requires large amounts of investments to implement priority programs under NAP. About US$ 1.5 billion would be required annually for next 30 years to implement NAP programs. Let us assume that developed countries fulfilled their commitments of disbursing US$ 100 billion each year through Green Climate Fund (GCF) from 2022 onwards. All non-annex 1 countries (154 Parties to UNFCCC) can access GCF resources for climate change mitigation and adaptation. Of US$ 100 billion, 50 percent is allocated to adaptation. Accessing funding from these Funds is not easy. How much resources will be received from existing funds and bilateral support largely depend upon the national efforts.

Financial pledges on LDCF and Adaptation Fund indicate higher possibility of showing interest to support to LDCs and dilute 'loss and damage' agenda sufficiently. It indicates to channelize funding for adaptation actions, and engage Parties to implement their NDCs. Implementation of Nepal's targets to net-zero emissions by 2045 and NAP priorities may hopefully not be like the previous environmental action plans and pollution control commitments, including of Kathmandu Valley.