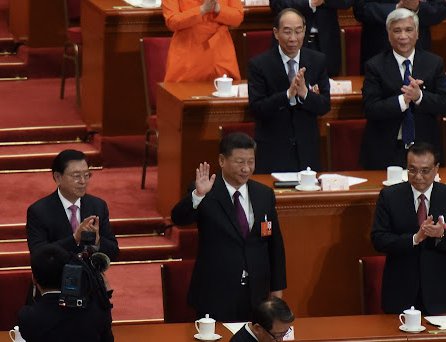 A Chinese Communist Party official has stressed the significance of a historical resolution adopted at the latest plenary meeting of the party's Central Committee.

The four-day plenum closed on Thursday. The resolution, summing up the party's 100-year history, was the first document of its kind to be adopted in 40 years.

Speaking to reporters in Beijing on Friday, a party official described the resolution as a political declaration to further develop President Xi Jinping's Thought on Socialism with Chinese Characteristics for a New Era.

He said the resolution will also guide the party on its course of action to achieve the goal of ''rejuvenation'' of the Chinese people.

The official said that under the party's central leadership with Xi at its core, unity should be strengthened like "a block of steel." The comments are apparently aimed at enhancing President Xi's authority, as he seeks to extend his tenure as party leader.

The adoption of the historical resolution is considered a key stepping stone for Xi, ahead of next year's national congress where he is expected to seek an unprecedented third term.

Another party official defended Xi's initiative to eradicate the wealth gap under the banner of "common prosperity."

The official said the purpose of the policy is not to save the poor by destroying the affluent, or to force people to donate their wealth.

Concern has been mounting in China that a forceful redistribution of wealth may hamper corporate activity and hurt the country's economic growth.