Liquid democracy (or participatory digital democracy) is a form of direct democracy where people can vote for individual proposals, without delegating all decisions to a single representative 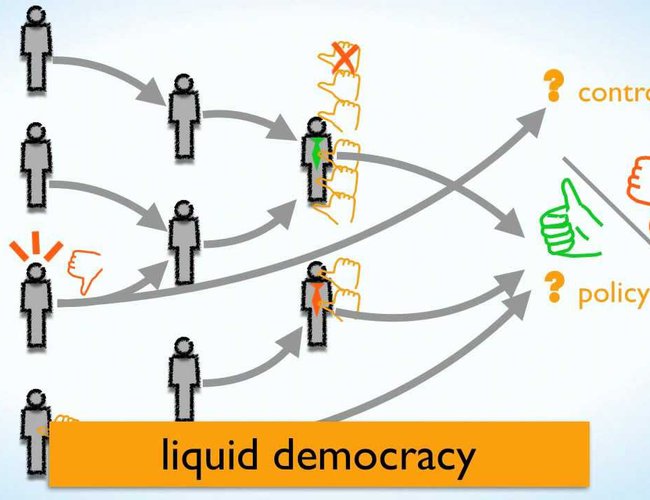 Liquid democracy is also known as delegated democracy. It is one of the most powerful voting models for collective decision-making in large communities or organizations. It is a hybrid of direct democracy and representative democracy. It allows people to create a truly democratic type of ballot. Voters have the power to vote directly on an issue or to delegate their voting rights to a trusted third party. An important property of liquid democracy is transitivity. This new democracy is based on a new technology called DAO (Decentralized Autonomous Organizations) that uses the chain of blocks and smart contracts to automatically distribute decisions among all those involved.

Liquid democracy (or participatory digital democracy) is a form of direct democracy where people can vote for individual proposals, without delegating all decisions to a single representative. In order to do it, citizens can vote through an online platform for each topic of national relevance.

Liquid democracy involves a voting system in which votes are freely transferable; it is a system of castable, revocable, and transferable votes at any time.

In this system, everyone can decide whether to express their own opinion or to trust others to represent themselves; in the latter case, however, you can think of yourself at any time (that is, you do not have to wait for the next election) and return it to your elected representative with immediate effect. This is a process in constant motion: voting rights, constant movement of votes. That is why it is called "liquid democracy." Although it resembles a delegated, electoral procedure, it still goes beyond that.

It is the system of voting that is not limited to the transferability of votes. It is a system of castable votes that can be withdrawn and transferred at any time. While in the case of indirect (representative) democracy, a representative and direct (base) democracy have to take into account the opinions of all members, in liquid democracy there is a liquid transition between the two. Liquid democracy is a "compound" of direct and indirect democracy.

In this system, each participant can determine whether they want to express their own opinion or want to be represented by others. It would seem that every voter would have the right to vote again and should not wait until the next election. This is a process that is in constant motion, that is, voting rights, votes are in constant motion. That is why it is called "liquid democracy." This is similar to a delegated electoral mandate but goes beyond that.

In this system, everyone can choose to have their own opinion they want to express instead of trusting what your representative has to say. you don't have to wait till the next election if you are not happy with the work of your representative and you can immediately regain your choice. This is a process in constant motion: voting rights, the constant movement of votes, which is why it is called liquid, ie liquid democracy.

Due to the loss of confidence, the repulsion towards a corrupt and distant political class has generated social and economic complications of daily life and the democracy we are practicing is not solving the very problems. This distance between our representatives, their political agenda, their personal interests, and their socialization on certain issues, is totally beyond the control of citizens. When you do not trust any political party anymore, liquid democracy is the solution.

With a very high percentage of abstentions, the last elections showed again the dissatisfaction felt by all those who consider that the voting method is not convenient for them:

We live in a knowledge society. Knowledge is then a fundamental element for citizens to express their vote. This obviousness is true in classical politics, and if possible, it is even more so in liquid democracy. In the latter case, the challenge is greater since the new technologies and the Internet are of general scope but concern a particularly specific population.

China’s Rapid Transformation And Lessons To Learn By Krishna Silwal 2 days, 11 hours ago

Youths In Nepal Elections: From Social Media To National Platform By Sangya Dhakal 4 days, 10 hours ago

Skeleton In The Sandook By Hemant Arjyal 5 days, 8 hours ago

An Overture Filled with Confusion By Dr. K. Uprety 6 days, 15 hours ago