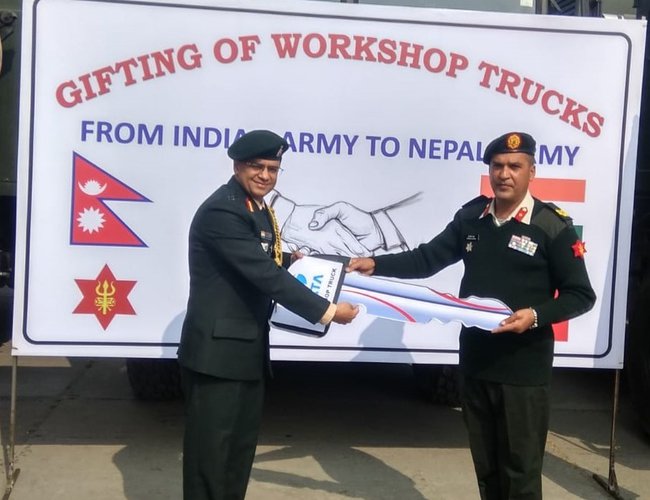 The Indian Army gifted TATA LPTA 1628 Workshop Trucks to Nepali Army in a ceremony organized at Nepali Army Headquarters, Tundikhel. The workshop trucks were handed over on behalf of the Indian Army by Col Amit Sharma, Defence Attaché of India to Brig Gen Krishna Dev Bhatta of Nepali Army.

These workshop trucks which act as a compact mobile workshop will be instrumental in ensuring smooth and uninterrupted functionality of Nepali Army transport fleet.

The gifting of workshop trucks comes immediately after the arrival of Gen Prabhu Ram Sharma, COAS, Nepali Army back in office after recent conferment of Honorary Rank of Gen of the Indian Army by the President of India.

The timely provision of military hardware under defence cooperation is a testament of strong and deep rooted relations between Indian Army and Nepali Army, and will go a long way in further strengthening the bonds between India and Nepal. The Indian Army on behalf of the Government of India will continue to facilitate Nepali Army in its endeavours to strengthen and modernise its capabilities.

Germany Decides To Continue With The Bilateral Development Cooperation With Nepal Beyond 2023 By NEW SPOTLIGHT ONLINE 7 hours, 25 minutes ago