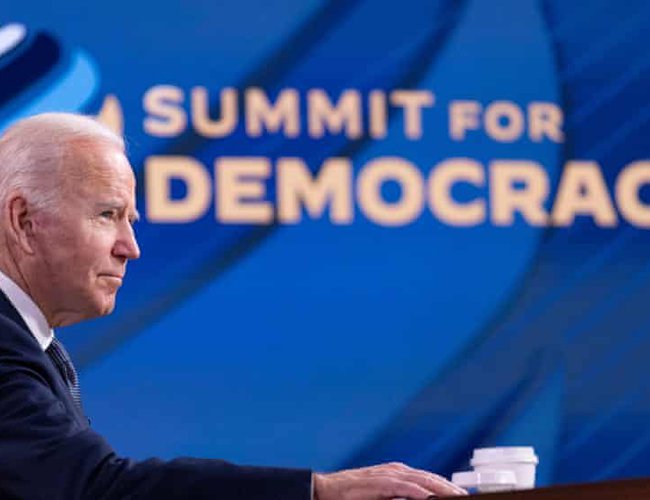 US President Joe Biden says the world needs new "champions" in the struggle against authoritarianism. He made the remark at an online gathering of 100 world leaders for his inaugural Summit for Democracy.

The meeting drew participants from governments and the private sector. Biden told them that they may face different challenges, but they seek a common goal. He said the gathering has demonstrated that the democratic world is everywhere, and that autocracies can never extinguish the ember of liberty.

One of those taking part was Belarusian opposition leader Svetlana Tikhanovskaya. She joined the summit from Lithuania, where she fled after challenging President Alexander Lukashenko in an election last year.

People in Belarus have faced crackdowns by government security forces. Tikhanovskaya said democracies should "push back and reclaim the initiative."

Taiwan's Digital Minister warned that democracy has been backsliding during the coronavirus pandemic. Audrey Tang said authoritarian regimes justify human rights violations in the name of public health, but Taiwan is standing firm on the frontlines of the global struggle with authoritarianism.

Biden plans to host an in-person summit next year. He says participants must prove themselves over the coming months. He urged them to build new momentum for preserving human rights.

Leaders from China and Russia were not invited to take part in the summit.

Western Allies Free Up Leopard 2 Tanks For Use In Ukraine By Agencies 3 days, 18 hours ago