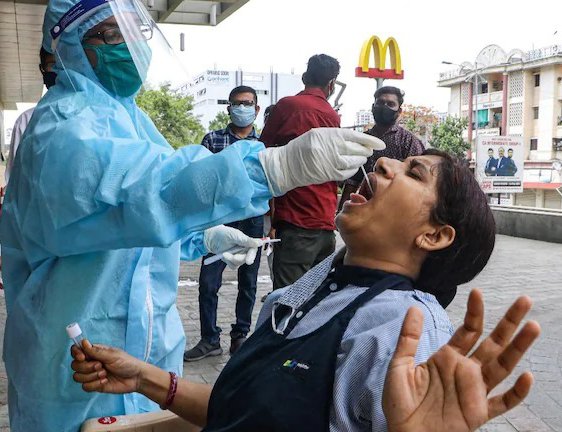 Police and administrative officials in Delhi have kept vigil to check violations of Covid-related guidelines as weekend curfew kicked in Friday night in the city to curb the spread of coronavirus.

The weekend curfew started at 10 pm Friday and will continue till Monday 5 am. Officials in several districts said that teams will be in the field during the period to check that the curfew order was not violated and people did not venture out unnecessarily.

In other news, the Asian Waterbird Census (AWC), an annual count of waterbirds which is under way in parts of Delhi-NCR, has found lower waterbird species diversity at East Delhi’s Sanjay Lake when compared to the count from the past three years.

The peak of the ongoing third wave in the country could go as high as 8 lakh cases in a day — almost twice the peak of the second wave — but the sharp rise in major cities like Mumbai or Delhi could be arrested very soon, perhaps by the middle of this month, said IIT-Kanpur professor and mathematician Manindra Agrawal.

He said his projection is based on current calculation, which is preliminary as data for the entire country is still not in.

“The third wave (for the country) is expected to peak somewhere in the beginning of next month or even slightly earlier. As of now, for an estimate, we predict a wide range between four to eight lakh cases a day. The all-India curve has just started to rise. It will take another month’s time to come down. By middle of March, the third wave of the pandemic should be more or less over in India,” Agrawal said.