Nepali New Year 2079 And Myths Of The Bisket Jatra Festival

Nepali New Year 2079 And Myths Of The Bisket Jatra Festival 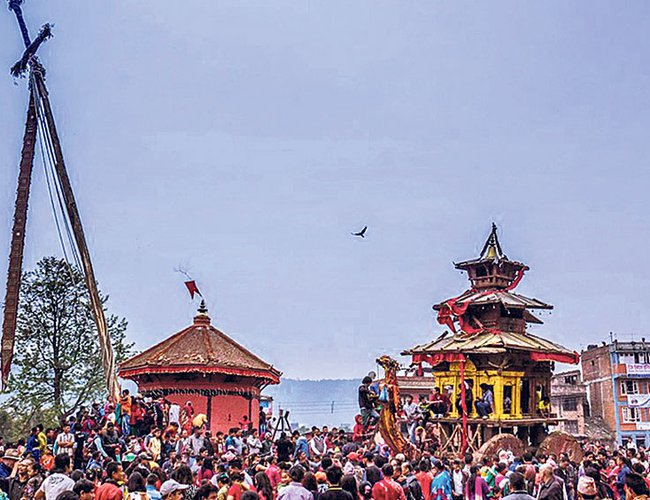 Bisket Jatra, Bhaktapur's weeklong festival marks the ancient solar Nava Barsha (New Year) and is the only festival that does not follow the lunar-based Nepali calendar. The jatra commences after a special Tantric ritual in th Bhairab temple in Taumadhi Tole in Bhaktapur.

A Princess’ Deadly Curse: Myths of the Bisket Jatra Festival

This year, Bisket Jatra, the most important festival of Bhaktapur, will be held from April 11-18th, amidst the usual high-spiritedness. Thankfully, no injuries or fatalities were reported last time; it’s not uncommon to hear about somebody losing his life after being crushed by a chariot’s massive wheels, or a crashing lingo (tall totem pole). This boisterously celebrated festival falls around the Nepali New Year (April 14, 2022). The myth behind the festival is, quite simply, an unbelievable tale!

It concerns a king named Jagjyoti Malla, of the famous Malla dynasty. In the Kathmandu Valley, the Malla era lasted from 1200 to 1769 CE. Under the Mallas, Newari art and architecture blossomed due to enthusiastic royal patronage. The enchanted valley was divided into three kingdoms by King Yaksha Malla in 1482, with his three sons ruling over Kantipur (Kathmandu), Lalitpur (Patan), and Bhadgaon (Bhaktapur). The reign of King Pratap Malla of Kantipur (1641-1674) was a time of especially great cultural achievement, with the construction of many magnificent monuments like the Hanuman Dhoka Palace, the Taleju Temple next to it, and Rani Pokhari in central Kathmandu.

King Jagajyoti Malla of Bhaktapur, although not even close to King Pratap Malla as far as artistic feats were concerned, nevertheless engraved his name in the history books as the king who initiated Bisket Jatra, a nine-day festival that is unique to Bhaktapur. He was fascinated by myth and folklore, and it was due to a particularly intriguing myth that Bisket Jatra was established as an annual event.

The myth went like this: there was once a beautiful princess who seemed destined to remain without a husband, since she was under a terrible curse that decreed that anybody unfortunate enough to wed her would die the very next day. A number of young men had died after marrying her, without the nuptials being successfully consummated either. All was despair and despondency in the palace. Now, there was a young man who was foolhardy enough to take the risk, despite knowing about the curse. His elderly mother forbade him from doing so, but then another old lady (Goddess Bhadrakali in disguise) offered some advice to the young lad, following which he could ensure his safety.

After the wedding, as soon as they lay in bed, the princess started snoring softly, having fallen asleep. The lad, following the old lady’s advice, kept wide awake. He was determined not to close his eyes, no matter what. He stared at his new wife; all seemed normal for quite some time. Then, suddenly, what should he see but two reptiles slithering out of the princesses’ nostrils!

For a moment, he was mortified; he had never seen such a sight! But then, coming back to his senses, he picked up his razor-sharp knife and wasted no time in cutting the reptiles into tiny pieces even as they were slithering out. Thus the serpents, responsible for so many deaths, were killed by the brave lad.

It was a story that became King Jagjyoti Malla’s favorite legend, and he wished it would be remembered for posterity, so he ordered that a festival to commemorate it should be held every year in Bhaktapur. This was originally called Bisyaku Jatra, but now is more popularly known as Bisket Jatra (in Newari, bi and syaku means snake laughter). Besides the principal rath (chariot) of Lord Bhairab, there is also a rath carrying Goddess Bhadrakali accompanying it.

A procession of the two raths, along with palanquins bearing other deities, begins in front of Nyatapola Temple, and goes through different localities of the city, halting at some places on the way. On New Year’s Eve, two lingos (55-ft-tall totem poles) are erected in two different locations. On New Year’s Day, one of the lingos is brought crashing down, symbolizing the killing of the serpent. Similarly, to symbolize the successful consummation of the marriage, the two raths are made to crash against each other.

Two Shilas Left For Ayodhya From Janakpurdham By Agencies 5 days, 20 hours ago