Written by BipinAdhikariet al, this book has analyzed how Nepal is coming out of the shackles of history and heading towards equality, justice and dignity. 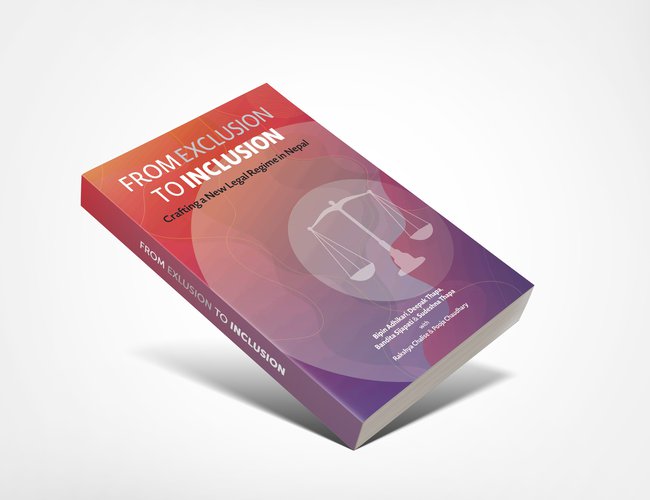 Nepal is one of the very few countries in the world where the state has made significant efforts in dealing with the issue of social exclusion in recent years.

From Exclusion to Inclusion: Crafting a New Legal Regime in Nepal (Kathmandu: Social Science Baha, 2022) is a great work for anyone who is interested in the progress Nepal has made to achieve social inclusion and consolidate national unity. This progress has led to creating new spaces for all women, Dalits, numerous minorities and indigenous people of the country, who faced exclusion of different types in the process of nation-building.

Written by Bipin Adhikari et al, this book has analysed how Nepal is coming out of the shackles of history and heading towards equality, justice and dignity. It explains how different communities based on gender, ethnicity, religion and caste, who had been excluded from positions of authority and pushed aside, are being mainstreamed and how the state is trying to improve the ability, opportunity, and dignity of those disadvantaged on the basis of their identity, language, culture and religion. Obviously, this is the first book of its type written after the promulgation of the Constitution of Nepal in 2015, which provides a strong basis for these changes.

The book has seven chapters that outline social exclusion and major thematic trends in Nepal. It starts with a brief historical background, after the end of the Rana regime in 1950-51, and gradually moves forward to the mass movement and enactment of the Interim Constitution, which provided a progressive road map for social inclusion. It then deals with the efforts made in the Constituent Assembly I and II elected in Nepal to write a new constitution. With significant efforts and compromises, the draft constitution was finally endorsed by more than two-thirds of the CA – II (507 of the 598 members at the time). This Constitution was the first people’s Constitution in the history of Nepal.

The authors of the book have tried to analyze this document on the basis of fundamental rights guaranteed by the Constitution, directive principles and state policies, state restructuring, constitutional commissions, language policy, and efforts towards the constitutional legal inclusion of various groups. The challenges to implementing the Constitution have been summarized in the last chapter of the book. With the new Constitution, Nepal has entered, what the authors describe as “a new phase of understanding, implementing, and reforming where necessary but it also called for an introspection of what that achievement meant and where efforts should be directed in the future.”

It is no secret that Nepali Congress and CPN (UML), the two major political parties in Nepal, who had a great say in the constitution-building process, were not as revolutionary as the Maoists, and had a moderate approach in the matter of social inclusion and state restructuring. They wanted change, but wanted to leave many issues of inclusion as something that would be better addressed by future parliaments at their own pace, in due course, and based on a popular mandate. However, CPN (Maoists) and Madhes-based parties were actively seeking inclusion by all means, placing emphasis on robust federalization and restructuring of the state. The issues of identity and language played a huge role in their politics. These sentiments were codified in the Interim Constitution as well in 2007. The entire problem had been addressed by this interim document in detail. Social inclusion was not only projected as a long-term ideal but the state was also to be restructured in order to achieve it.

The role of the Maoists in the context of social inclusion is an important dimension of national politics. They were a critical factor when finalizing the Interim Constitution. After they joined the constitution drafting process, and put down their arms, they were not as strong as before. The first Constituent Assembly failed to adopt a new constitution due to disagreements between different political parties on core constitutional issues. Even though the Maoists had a strong presence in the house, they were only the largest party, not the party with a decisive majority in the house. The challenge was to get through democratic decision-making. A compromise solution was therefore a compulsion.

The election to the second Constituent Assembly changed the scenario further. Both the Nepali Congress and CPN-UML secured more seats in the Assembly than the Maoists, reducing them to the third force in the country. Madhesi parties also lost their seats and the number of people representing minority and indigenous groups further decreased in the second Constituent Assembly. In fact, the authors of the book have also compared the relative strengths of all major parties in the new Assembly that explains the situation. This reality reflects in the new Constitution and its approach in handling the issue of social inclusion in contemporary Nepal. However, nobody should underscore the fact that both these Assemblies played important roles in establishing social inclusion as a national agenda in their own way.

From Exclusion to Inclusion is an easy reference book for anyone interested in the recent facts and figures as well as the principles of inclusion in Nepal. It deals with most of the controversial issues that need discussion. It provides a deep overview which can be useful for activists, lawyers, journalists, politicians, minorities and indigenous communities, and organisations and individuals who are working or interested in this sector. The reading materials for these subjects which are otherwise hard to find have been collected and listed here. The writers have done a fabulous job in explaining the milestones in the development of today’s Nepalese state which is making steady progress towards inclusion. The use of statistics in the book is impressive, contextual and concise. Of course, it also has a way forward for the future.

[Mandal is a student in the integrated five-year Bachelor of Business Management & Bachelor of Laws (BBM-LL. B) programme at Kathmandu University School of Law (KUSOL)