Water Management In Mountains: Snow Water As An Alternative

About 74 percent of local government representatives of Chure, mid-hills and mountains of 58 districts opined that they have had dried-up springs in their area (Dahal et al, 2021). 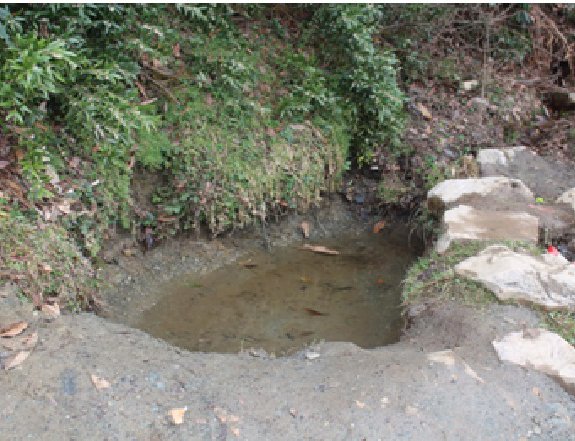 We were taught that Nepal is the richest country in water resources after Brazil. The secretary at the ministry of energy, water resources, and irrigation, speaking at a CGIAR Research Portfolio Launch and Stakeholder Dialogue Program recently, argued that Nepal had an abundance of water, so, there was no water scarcity. In contrast, several studies have revealed that water scarcity is all over Nepal no matter whether that is Tarai, chure, mid-hills, or mountains. But, their forms could be different. The dry spell of winter and early months of monsoon bring scarcity while the monsoon months receive too much water resulting in a lot of disasters and adversities to humans. Considering the average rain and snowfall in Nepal, the question of water scarcity sometimes becomes irrelevant. But the stark reality is that several intersections of Nepali villages and urban settlements face an acute shortage of water for several months each year.

Then the question arises why that is happening, and the answers could be several. Here, we will try to contemplate the externalities that are responsible for complicating the life of many people from projects developed under usual scenarios including urban settlement development and water supply schemes, and present a case Laprak as a representative of several others in order to draw the attention of stakeholders.

A nationwide survey conducted by Nepal Water Conservation Foundation (NWCF)in 2020 in collaboration with ICIMODrevealed that spring sources were being dried up throughout Nepal aggravating the scarcity. About 74 percent of local government representatives of Chure, mid-hills and mountains of 58 districts opined that they have had dried-up springs in their area (Dahal et al, 2021). The National Climate Change Impact Survey, 2016 also corroborated the fact that water sources in Nepal were declining in recent decades (CBS, 2017). As per the NWCF survey, Chure was the hardest hit among the three ecological zones and the mountain the least (Fig.1). 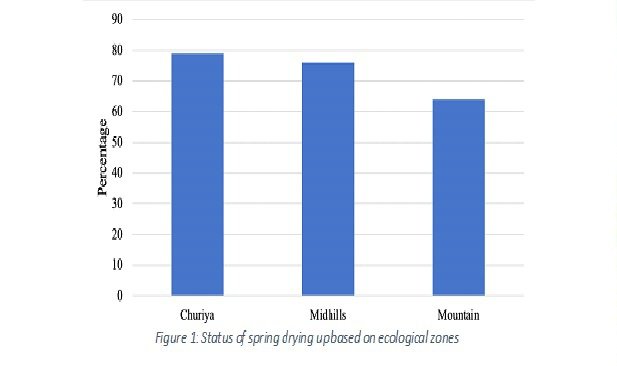 Our field reconnaissance found that the mountain communities have also been facing water scarcity where snowfall compounded the problem further in addition to the spring drying up in the mountain region. Laprak, the 2015 Earthquake epicenter, developed as an integrated model village situated inWard No. 4 Gupsipakha of Dharche Rural Municipality(RM), Gorkhahasaround 600 newly built homes (Fig. 2). 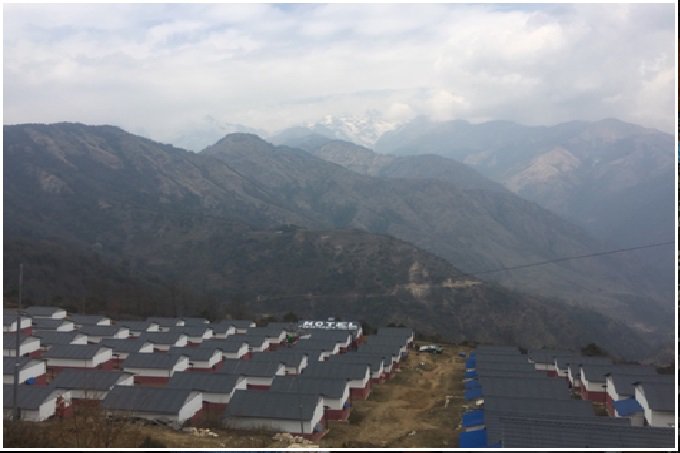 The tantalizingly attractive settlement developed in support of NRN led by Sesh Ghale is unable to be a livable village to the locals as envisioned by the proponents. It may be an attractive place for tourists but has failed to attract the beneficiary households. Instead, they have continued living in their villages. One of the major reasons behind it is the disconnect of the features that a mountain community needs. Firstly, it lacks reliable connection of water supply including electricity and roads. The drinking water supply scheme developed for it is brought in from about a 19 km distant source investing 60 million rupees by Care Nepal and Swara Sadan Gau Bikas Kendra, Gorkha gets dry in winter months. Because the winter frigid temperature breaks the collection and distribution pipelines especially from December to March each year. The scheme did not consider the frigid temperature of winter and rainwater harvesting from the CGI sheet roofs while designing.

Dalbir Gurung, a homestay operator in Laprakopines that the water shortage becomes troublesome to those families operating homestays and living temporarily once snowfall starts in winter. 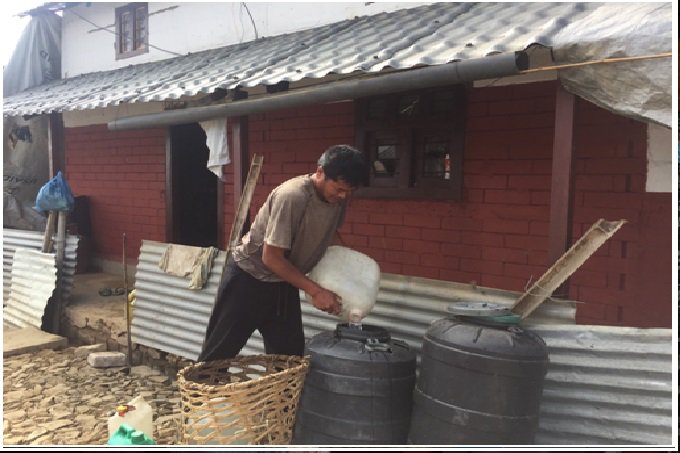 Alternatively, they have a small natural spring just outside the settlement to collect water but that is not enough for the limited number of homestays too. 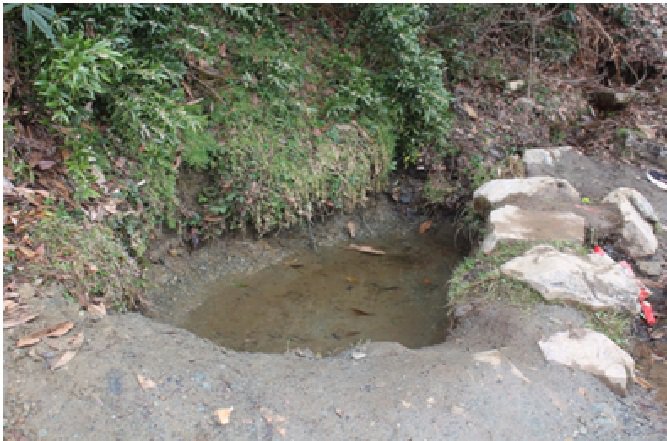 Figure 4: A spring located at Gupsipakha

Secondly, the model settlement designers did not consider the livelihood aspects of the villagers especially agriculture as an integral part of the people. The irony is that the settlement does not have even a backyard for a kitchen garden and livestock, houses with toilets only.

The water scarcity has limited the scope further of having livelihood opportunities whereas the original Laprak village located downhill of Gupsipakha possesses almost all. It seems still vibrant and connects the local people well with their traditional occupations. Interestingly, the vegetables served in the homestays also come from the older village. As per Santosh Gurung, then chairperson of Dharche RM, around 40 houses are only occupied mostly by the homestay operators, and the rest houses are left unoccupied. Santosh was exploring livelihood options to make the model settlement habitable and vibrant.

The water problem has reached to the provincial government of Gandaki province through Dharche RM. The chief minister of Gandaki province Krishna Chandra PokharelNepali, at a program organized in Laprak in March, had promised the residents to resolve the problem soon in response to Santosh Gurung, then chairperson of Dharche RM’s request for help. 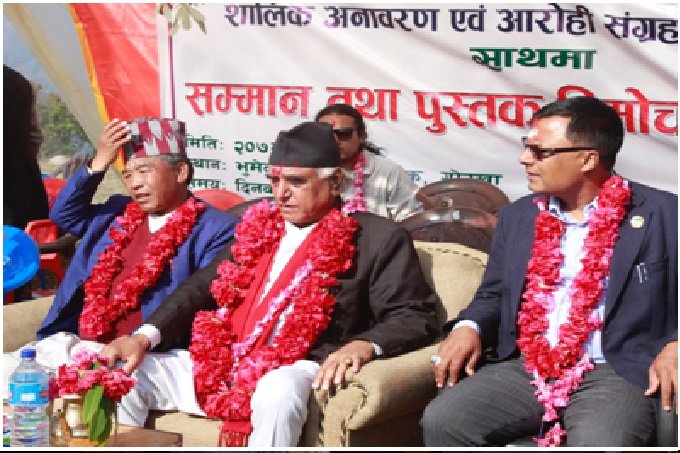 Since the snow has become a compounding factor to the water scarcity, we were surprised to see the locals practicing snow harvesting as an alternative. Maya Gurung, a homestay operator in Laprak has been practicing snow harvesting in winters where she uses plastic tanks/drums to store snow and let it melt down. She has to use the snow water for around four months but still, that is not sufficient.“We don’t have alternatives other than to harvest snow for water”, Maya said. She expressed her profound melancholia on the shortage of water where she finds difficulties in arranging water for guests, and the visitors face WASH-related problem, consequently. For instance, we, the authors having the habit of daily bathing, also had to skip bathing on the day of our stay. 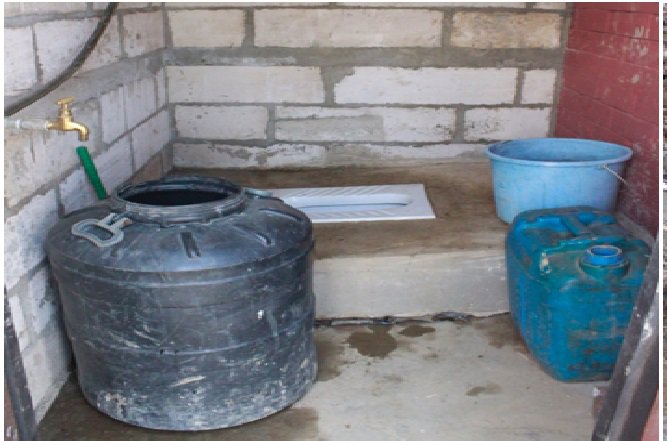 Figure 6: Vessels for water in a toilet of Maya Gurung’s homestay

The people are in search of water alternatives as the water supply scheme is not going to meet their demands throughout the year. They are also aware of the fact that the topography around the settlement is fragile to construct the larger structures. Therefore, they wonder whether they can construct small ponds and ditches in their area so that they can recharge the springs or explore other alternatives to remedy the water shortage. Dalbir stated that the Laprak community wanted to have appropriate rainwater harvesting and groundwater recharge systems alternatives but they did not have the technical knowledge and skills behind it.

Technical solutions to the pipe breakage could be an available but expensive for Nepal. Nobody knows there could be several other nature-based local solutions that the communities have been practicing for ages. Our field observation visit to Laprak found the practice that was locally adaptive and new to us. In the national water debates, rainwater harvesting is rampant and governments at different scales have included it in their annual policies and programs but nobody talked about the snow-water harvesting. More importantly, the snow-water harvesting practiced by the Laprak community can be upscaled and outscored especially in other mountain communities where there is a similar water problem. Therefore, we conclude that the state and communities should adopt and prioritize local traditional knowledge, wisdom and practices like harvesting rainwater and snow water using traditional as well as modern technologies that fit them. These practices should be made an integral part of the water management even in the large-scale projects carefully considered right from the project design.

Youths In Nepal Elections: From Social Media To National Platform By Sangya Dhakal 4 days, 22 hours ago

How Could Rising Inflation Disrupt The Nepalese Economy? By Hari Prasad Shrestha 1 week, 3 days ago