While Koirala Against PR, Maoists For Parliamentary Features

The second agenda of negotiation was about the taxonomy of the democracy that country should embrace for. Now, both the camps’ attention was focused on the subject, which was relating to the political system of the country. 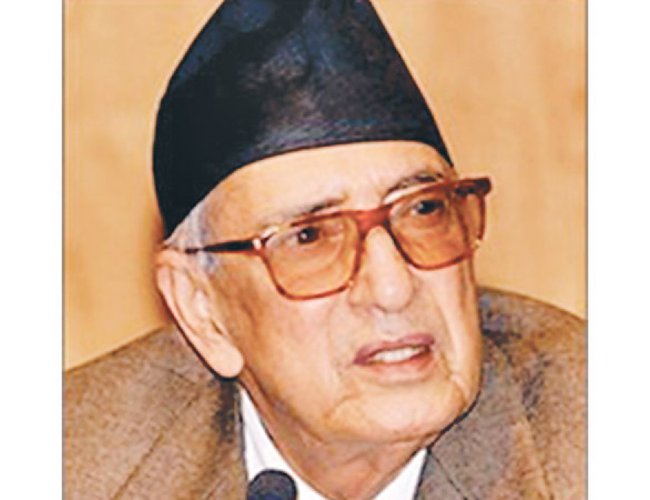 During his last stint as the Prime Minister, from 2006-2008, Koirala’s health was, in his own words: “deceptive” in nature. He meant to say, as he did state so on many occasions specifically with the foreign envoys who were startled meeting him in spite of news about his infirm condition; that he looked apparently healthier but he was not at the bottom. Koirala, naïve about the curse of pulmonary cancer being awfully hostile already against him, was hospitalized a number of times. On one occasion in the evening in Baluwatar, while he was confabulating with the UNMIN’s representative, the rumors even reached there about Koirala’s death referring to Madhav Kumar Nepal- the leader of the UML. The rumor was that Nepal was told by someone at somebody’s marriage reception about Koirala's demise. It prompted Koirala to indirectly appear before the Tv. later in order to falsify the gossip. As a matter of fact, in spite of highs and lows in his health conditions, Koirala successfully headed most of the negotiations between the government and CPN-M and also major decisions of the Seven Party at Baluwatar, in the PM’s official residence, which then was a hub of political activities and international affairs of the country.

Like, in the case of most the other negotiations, an unwritten schedule was made for the negotiation, specifically on the electoral system and model of polity to be adopted by the country. After all the participants assembled in the morning in Baluwatar, PM Koirala and Rebel leaders PK Dahal and Dr. BR Bhattarai occupied their seats which were arranged face to face. While the PM was flanked by his team members included Dr Shekhar Koirala, home minister KP Sitaula, and the author as PM's foreign affairs adviser, the Maoist leadership was accompanied only by Bhattarai. The dialogue was taking place at the adjacent room of the PM's bedroom.

After the PM opened the dialogue for negotiation, Prachand, at the outset, said "Girijababu, we want that some historic works, which are in the interest of the nation, are carried out through your hands." PM and his team did not respond to his opening statement. Instead, PM, overlooking his soothing remarks, asked rebels to enter into the agenda of the electoral system to be embraced by the country. Then, the Maoist leaders both in one voice pleaded in favor of the cent percent Proportional Representation Electoral system. The PM was tight-leaped and just lent his ears to the arguments of the Maoist leaders. Their arguments mostly were centered around theoretical perspectives such as that the PR system would enable representations of the downtrodden sections of society in the parliament while the First-Past the Post system was a bourgeoisie form of the electoral system. But, at the bottom, all members of the Prime Minister’s side had knowledge that the Maoists, as they were unsure about their victory in the forthcoming electoral battle, were clandestinely lobbying for the PR system with other parties in the legislature as well as the request that the PR electoral system would help them to secure some more seats in the legislature. The PM, who was not in favor of the PR system, neither spoke a word in favor or against the PR system. Home Minister KP Sitaula and Dr. Shekhar Koirala, however, put their point of view on the First-Past-The-Post system. They were in favor of the electoral system like of Westminster model, which was already practiced in Nepal in the past after the 1990s political change, and neighboring India too had been practicing the system successfully for decades. As a matter of fact, junior Koirala and Sitaula’s deep-rooted understanding was that the electoral fray, sans PR system, would benefit the NC ultimately as the communist forces- Maoists and UML, were viciously competing with each other in the upcoming CA elections.

But, to the dismay of the rebel leaders, the PM was unrevealing! When the author saw a kind of deadlock and the dialogue teams were not concluding on the 1st agenda, he had to venture in favor of the PR system! The tactical move was not motivated only to keep the former insurgents incessantly engaged in the peace process but was also for other reasons. The author argued, amid silence, "Although the PR system of representation is somewhat different than the Westminster model, it has been successfully practiced in the democratic setups as well. For instance in Germany!" The author had the courage to cite the example of Germany because he had not only worked on his post-doctoral research availing AvH Fellowship in Germany but also had written a monograph on "Political Acculturation in Germany," which dwelt faintly also on the PR system of the Federal Republic of Germany.

Immediately, it was difficult to know how the PM and others on his side took the author’s points of view, but the Maoist leaders were seemingly in a jubilant mood. At the bottom, the Maoist leaders never ever expected that such an argument would be passed in from the side of the PM. The high-spirited Maoist Chief Prachand once again pursued the reticent PM by saying, "Girija Babu.. We are not asking for something which is undemocratic and crossed out by democratic nations." The PM was still silent and so were three of his members. But, the PM, sensing that the negotiation tempo was in very lower spirit, hinted at his affirmation to the PR electoral system through the gesture of commanding all to move on to the next issue pertaining to the taxonomy of the democracy (La aba arko agenda ma jaw).

While recalling these episodes, yet on the auspicious occasion of the birth anniversary of late GP Koirala, as Nepal has not only exercised for years the mixed PR system but also inclusive democracy oriented towards the socialism; it is disheartening to note the nation’s current gloomy picture. The country has failed to propel itself on the path of linear progress. Instead, over these long years, whereas the PR system has been misused in favor of toadies and rich men by major political forces, the democratic institutions to are put in the doldrums since the three organs of the state: executive, legislature and judiciary, are beset by anomie and aberrations. The consequences are that while the nation’s economy is in a shaky state, according to CEIC data, Nepal had a total of $ 30.927 billion in Jul 2021 while the external debt accounted for $ 8.8 billion in December of the same year; the political forces, which had agreed to the 2015 constitution, now are up for other new political agendas such as Presidential or direct election to the Prime Minister.

GP Koirala had, in spite of his strong reservations, succumbed to the PR electoral system, which was bound to evolve the coalition politics, only with the hope that the country would be developing a culture of unity, cooperation and politics of consensus among parties in the country. But, in reality, coalition politics has been parodied contrary to the expectation of Koirala. The general perception about contemporary coalition governments in the country has been awful. In such a piteous situation, the primary stakeholders of the country must awake, arise, ponder over and strive for corrective measures against the nation’s challenges sooner than later; otherwise, Nepal is ordained to slide down further.. alas!

Dr. Suresh C. Chalise served as the PM GPK’s Foreign Affairs Adviser. This article is part of his book titled, “An account of Nepal’s Peace Process” in progress.

How Could Rising Inflation Disrupt The Nepalese Economy? By Hari Prasad Shrestha 2 days, 4 hours ago

Nepal Votes, Why The Verdict May Not Make New Delhi Very Happy By Yubaraj Ghimire 3 days, 8 hours ago

COP 27: Flagging the Impacts in the Mountains By Batu Uprety 6 days, 1 hour ago

Upcoming Elections: Harbinger Of Change Or Stagnation Of Status Quo? By Dipak Gyawali 1 week, 5 days ago